Cost: $3 for dues-paying Members of Harvardwood (and their guests); $10 for all others.

The event begins at 6:30 with a reception with wine and nibbles; the discussion will start promptly at 7 pm.  Advance registration is REQUIRED—no tickets will be sold at the door.

The Star Wars saga is one of the most-loved film series ever.  Spanning three decades and seven films so far and set "a long time ago in a galaxy far, far away," its characters and phrases have become a part of who we are and how we think.  But, is Star Wars simply entertainment—or does it embrace wisdom than can and should affect the way we live our personal and political lives? 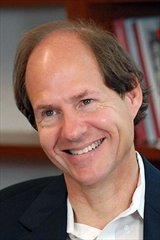 Cass Sunstein '75 JD '78 is the Robert Walmsley University Professor at Harvard Law School.  From 2009 to 2012 he was Administrator of the White House Office of Information and Regulatory Affairs.  Before that, he taught from 1981 to 2008 at the University of Chicago Law School.  He is the author of hundreds of articles and dozens of books, including Republic.com, Nudge: Improving Decisions About Health,Wealth, and Happiness (with Richard H. Thaler), and Simpler.   Sunstein clerked with Justice Thurgood Marshall of the U.S. Supreme Court.  He is the most cited law professor in the United States.

His most recent book The World According to Star Wars explores the lessons of Star Wars on childhood, fathers, the Dark Side, rebellion, and redemption—and constitutional law, economics, and political uprisings as well.  Time called it "the ultimate primer for guiding a Star Wars padawan to the level of Jedi Knight."  The Washington Post described it as "an enlightening and surprisingly personal tour of a galaxy."  And the Walter Isaacson said, "In this gem of a book, Cass Sunstein uses the Star Wars series to explore profound questions about being a parent, a child, and a human.  It will change the way you think about your own journey."

Professor Sunstein's book will be available for purchase, and a booksigning will follow the talk.