IVY Entertainment's first Women in Television Salon celebrates Women's History Month featuring the brightest minds changing the television landscape and discussing the most relevant topics of the year at The District by Hannah An in Beverly Hills.  The salon will also include an exclusive power networking opportunity for guests and panelists. 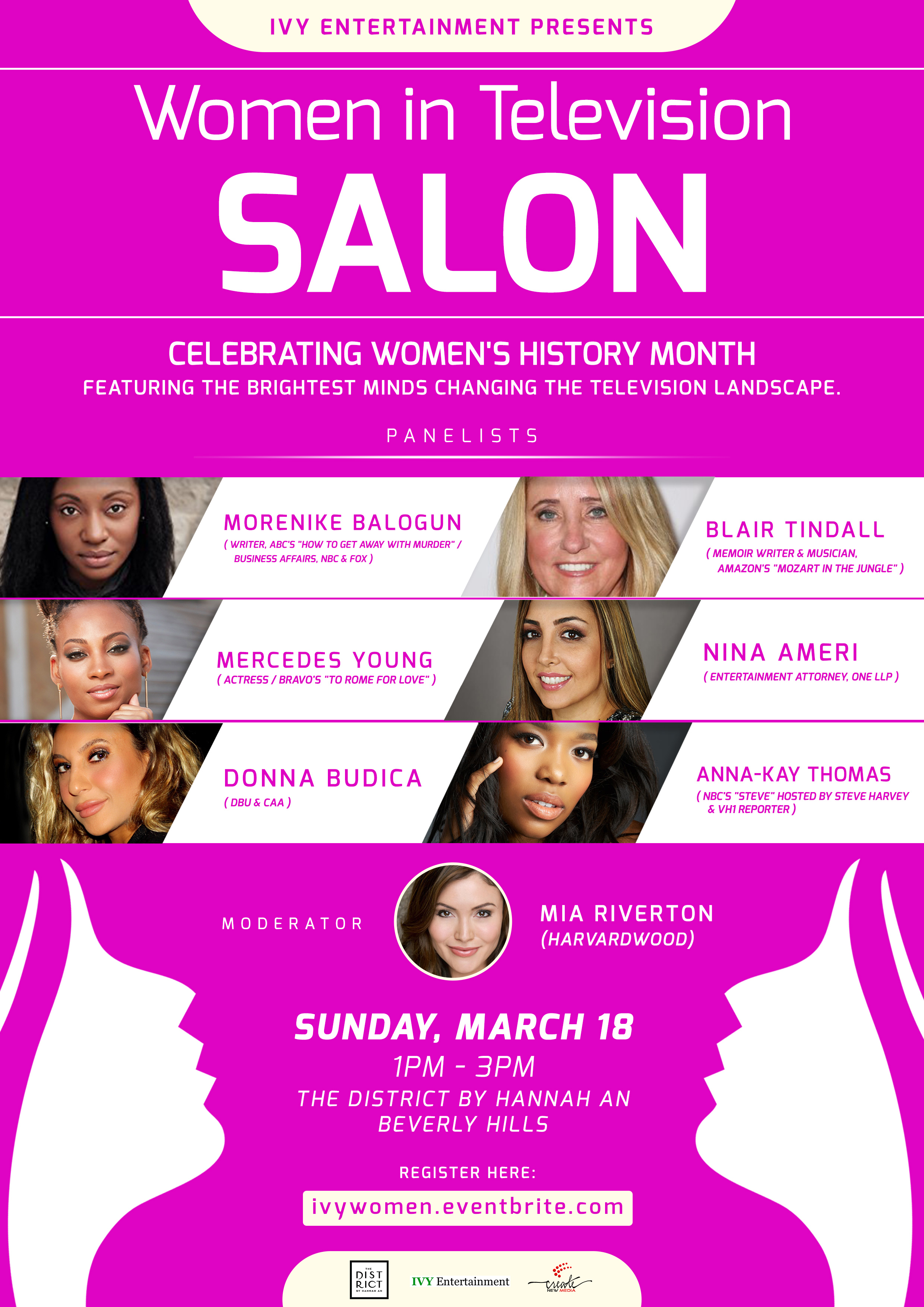 Mia Riverton Alpert is the co-founder of Harvardwood, a nonprofit Shared Interest Group (SIG) of the Harvard Alumni Association focused on strengthening ties between the arts, media, entertainment and education through community programs and online resources. Mia has also worked as an actor, writer and producer, appearing in TV shows including The Mentalist, Leverage and Curb Your Enthusiasm and in films including Spare Parts for Lionsgate. She co-created a TV pilot for CBS based on Red Doors, an award-winning independent film that she starred in and produced. Originally from Indianapolis, Mia was named a Presidential Scholar by Bill Clinton and graduated cum laude and Phi Beta Kappa from Harvard University. Mia lives in Los Angeles with her husband, producer David Alpert, and their two children.

Morenike Balogun (Writer, ABC's "How To Get Away With Murder" / Business Affairs, NBC & Fox)

Grammy-nominated oboist Blair Tindall penned Mozart in the Jungle, now an Amazon Studios comedy series of the same name winning two Golden Globes, an Emmy, and a Director’s Guild Award. In addition writing for such publications as The New York Times, she enjoys a musical career ranging from the classical stage of Carnegie Hall to the late-night ambiance of New York's famed Blue Note Jazz Club. A busy classical artist, Blair has appeared both at home and abroad with the New York Philharmonic and its fifteen-member chamber ensemble and has played principal oboe with the New York Philharmonic. Blair holds degrees from Manhattan School of Music, Columbia University (business) and Stanford University (communication), and has taught music and journalism at UC-Berkeley, Stanford, and Mills College. She is signed as a writer and speaker with The Gersh Agency.

Mercedes Young is an actress, model, author, content creator currently starring in Bravo's To Rome for Love and best known for her role in 2-Headed Shark Attack starring alongside Carmen Electra and Brooke Hogan. Mercedes was is in other films from Straight Outta Compton to Think Like a Man Too as well as television shows such as Comedy Central's Tosh.0, Discovery Channel's Married with Secrets and Lifetime's My Crazy Ex.  Mercedes is also a successful entrepreneur and author of the children’s book, Look at All the Things My Hair Can Do. Mercedes is also an upcoming tv showrunner and creator with her first semi-autobiographical TV series in development.

Nina Ameri is an entertainment attorney and Partner at One LLP.  Mrs. Ameri represents independent film producers, production companies, writers, actors, and directors in a variety of transactions ranging from: acquisition of intellectual property and life story rights, corporate formation, talent agreements, writer agreements, producer agreements, director agreements, music licensing agreements for independent motion pictures, sales agency and distribution agreements.  As a Los Angeles native, Mrs. Ameri has many relationships within the sphere of entertainment, media, finance and law which are valuable resources for entertainment clients in assisting them with the development, financing and distribution of their projects.

After graduating from the University of Pennsylvania's Wharton School with a degree in finance and an MBA in Media and Entertainment Marketing from USC, Donna went on to work at CAA in Motion Picture Lit and Talent with A-list writers, directors, and talent including James Cameron, Guy Ritchie, Hugh Grant, and Sandra Bullock. She went on to work at Atom Factory who represented musicians including Lady Gaga, John Legend, and Miguel. As a strategy and influencer marketing consultant, she consulted for brands such as Bacardi, Samsung, Spotify, and Airbnb. Most recently, Donna launched dBu Creatives, a full service entertainment firm focused on artist/talent management, creative, strategic, marketing consulting, and philanthropy.

Anna-Kay graduated from Dartmouth with a degree in Neuroscience before moving to New York to pursue TV Hosting. After years of working to break into the industry, Anna-Kay won a 2014 national VH1 competition to be a reporter alongside Nick Lachey. She has since hosted and co-produced several digital shows for Condé Nast, including her popular "Bachelorette Recap" series. She's covered The GRAMMYs, The Oscars and The Tony Awards for Billboard and The Hollywood Reporter and also writes for HuffPost and Penguin Random House. She currently works on Steve Harvey's new talk show "STEVE" as on-camera talent. Anna-Kay is also proud to serve as Co-President of the Dartmouth Alumni in Entertainment & Media Association (DAEMA).