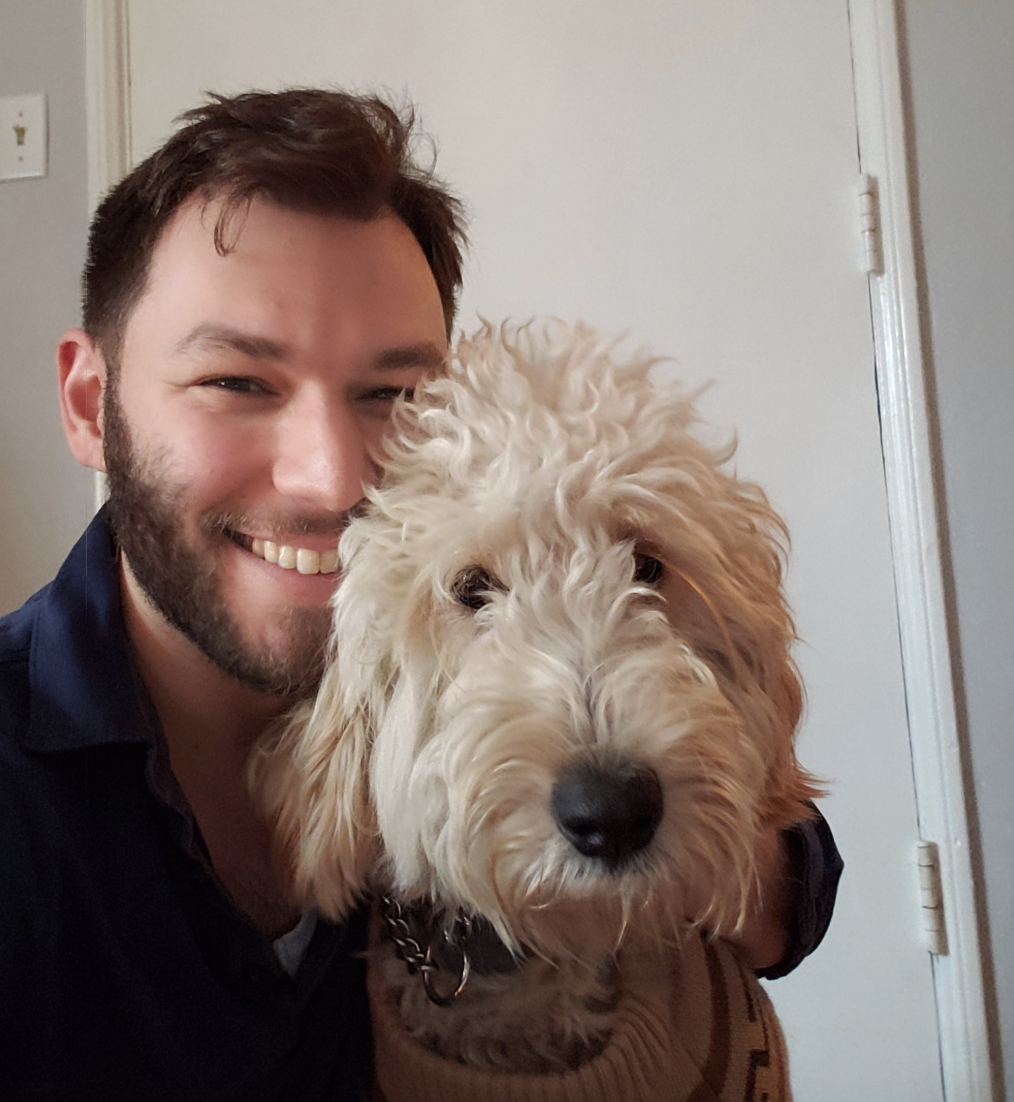 This month, we are catching up with Harvardwood Writers Program alum Michael Robin AB '08, who was selected to participate in the 2019-2020 WB Writers' Workshop! The Workshop is extremely selective, accepting only up to eight participants out of thousands of submissions yearly. Michael is repped by Zadoc Angell AB '03 of Echo Lake Entertainment.

Q. Did your Harvard experience play a role in your decision to become a writer?

A. When I was sixteen years old, I saw Charlie Kaufman’s Adaption and it blew my damn mind. I knew then that I wanted to become a screenwriter. But for years, this was a secret dream—I was scared that I wasn’t good enough to make it as a writer. During my junior year at Harvard, I finally enrolled in a playwriting class with Sam Marks. Sam’s encouragement, and the following year, the encouragement of my creative thesis adviser, Christine Evans, gave me enough confidence to believe that maybe I didn’t suck, and that maybe this writing thing could actually go somewhere.

Q. What do you know now that you wish you knew when you were first starting out? Were there unexpected challenges you wish someone could have prepared you for?

A. I made so many mistakes. I think the biggest challenge was simply not knowing how to organize my career. I knew I needed to be writing, reading, and networking—but what writing projects should I focus on? What scripts should I be reading? And where could I meet other passionate, committed, entry-level writers? Three years ago, I started working with a career coach, Lee Jessup, and she helped me navigate a lot of these questions.

One lesson: Take writing classes. For me, I find the deadlines and feedback of classes essential. But before you plunk down money for a class—research the crap out of it. Check out the instructor’s credits on IMDB—are they recent? Do they understand TV as it’s written today? Reach out to friends or acquaintances who have taken classes with that instructor in the past. For years, I stopped taking writing classes because I’d been burned by instructors and writing schools that cost a fortune but were godawful—a result of me not doing my research. But since 2017, I’ve taken a half-dozen classes at a writing school called Script Anatomy and they’ve all been fantastic.

I also wish I’d done a better job, early on, of educating myself about trends in the industry. Every early-career writer should listen to the Scriptnotes podcast and join the LA TV Writers Facebook Group. It’s also vital to build your writer community. You can do this by going to events and panels—at the WGA, through Harvardwood, through JHRTS, or through places like Script Anatomy. And if you like some of the people you meet in a Harvardwood Writers Program TV Module or a writing class, stay in touch! Form a writing group or play board games or go sing karaoke—building writer community doesn’t always have to be about the writing.

Thirdly: write specs! One spec per year. And use it to apply to the WB and CBS fellowships. For years, I didn’t spec, thinking it was a waste of time. I was so wrong. Take three months, March through May, and crank out a spec of a show you love that isn’t super serialized. Find a take on that show that is specific to YOU in some way, or deals with something interesting in the world that you have unique knowledge of. The script that got me into WB was a Good Fight spec about the college admissions scandal; it’s a world I know intimately, because I tutored in LA for almost a decade.

Finally, understand that writing is not like other jobs. As a writer, you can’t just throw work-hours at a story problem; past a certain number of hours of focused writing, you hit a point of diminishing returns. If I’m stuck on a story point after four hours of focused work, I’ve learned that it’s MUCH better for me to put the script or beat sheet down than to try and soldier through. If I keep writing, I’ll just write crap—but if I stop myself, inevitably, the next day, my subconscious will have cooked up some solution to the problem.

Q. To you, what are the 2 or 3 most important skills or qualities that a successful TV/film writer should have?

A. Empathy. The writer’s job is to make her audience feel a character’s emotions. You have to be able to get inside your characters’ heads, but you also have to be able to get into the audience’s head, and find ways of making difficult characters relatable. Empathy is also key when giving or receiving notes—it’s vital to deliver your notes in a way that recognizes the effort put into a fellow writer’s work, and it’s equally important to receive notes in a way that’s clinical and not defensive.

Resilience. If there’s one universal truth of Hollywood, it’s that everyone is going to tell you NO at all times always… until they don’t. You have to get used to it. Your job is to write your ass off, to write stuff that is so good and so specifically YOU that it’s undeniable. Even then, taste is not absolute, and people will still shred your scripts to pieces—the script that got me into the Warner Brothers’ Writers Workshop got a 4 on the Blacklist!—but if you have work that’s specific and excellent, I believe that it will eventually find its audience.

Focus. If you want to fast-track your career: make writing your priority. Find a way to pay the bills or an assistant job that helps you make connections, and write. It’s really important to have a social life and to build in some down time for yourself, so that you don’t get burnt out, but don’t take on extracurriculars. For years, I was the king of volunteering for stuff—running grassroots community organizing groups, teaching in Israel, planning events for my synagogue. It was only when I stepped back and told myself that Writing Comes First that my career really started to move.

Q. Can you describe your work process, from the conception of an idea to the first draft?

A. When I start on a new pilot, I spend a ton of time digging into Concept.  I ask myself—where’s the me in this idea? I want to make sure I have an emotional entry point, and I also want to make sure the idea has enough room in it to merit a television series, rather than a feature film.

From there, I’ll lay out the idea in a Story Area—a single-spaced Word document that runs through the beginning, middle, and end of the A, B, and C storylines. Once I have that ironed out, I’ll write a Beat Sheet that goes through all of the major beats and act breaks, and then I’ll move into outline. I love writing really detailed outlines—but I also find outlining terrifying, because there are hundreds of decisions to make. So for the initial pass on an outline, I do something I call a “slash draft”—I fart out a bad, broad strokes version of each scene, putting down on paper the stuff I know off the top of my head. The goal of this “slash draft” is to figure out what KIND of thing I want in a particular scene; in my second pass, I figure out how to implement these ideas in more precise language. I’ll also work out imagery, camera movement, and scene transitions in an outline. Depending on who the outline is going to, I might pull some of this back for submission, but I find it helpful for me to have made those decisions already so that when I start on my first draft, I’m focused on dialogue. Once the outline is done, getting a script written doesn’t take a ton of time—I’ll spend a few days on a “slash draft” of the script and then will spend another week or so writing the first draft.

Q. You say that you tell stories about characters struggling to overcome shame. Can you elaborate on that?

A. I was bullied a lot as a kid, but it became markedly worse at the end of sixth grade, when I developed a condition known as gynecomastia, or in the parlance of sixth grade boys, “manboobs.” I did everything I could to hide my body—I wore t-shirts at the pool, would go into bathroom stalls to change for gym class—but it didn’t matter. My peers noticed. I remember one kid throwing a thousand-page hardback of The Lord of the Rings at my chest to see if it would bounce, and countless other kids trying to “feel me up.” I became ashamed of and disgusted by my own body. In my late 20s, I finally started unpacking this body shame and began to bring the emotional experience of it to my writing. Suddenly, this thing that had been so painful for so long became a well I could draw from when creating emotionally resonant, complex characters.

Q. Congratulations! You were recently selected to participate in the WB Writers' Workshop. Can you share with us how that experience has been?

A. Absolutely incredible. We have lectures on every aspect of the business. I’ve learned about everything from deficit financing to how to navigate your first day on set. But the most amazing part of the program is the people I get to collaborate with. My mentors give fantastic notes that push me to places I never would have gotten on my own. But most importantly, my peers are rockstars—they’re an insanely talented, thoughtful, fun, and genuinely kind group of writers, whose notes and ideas have elevated my own work in countless ways. I feel doubly lucky: that I got chosen to be part of this program, and that I get to collaborate with this group of writers; it feels like I found my tribe. I’m sad that the fellowship wraps up at the end of March, but excited to go through staffing season for the very first time.

Q. What upcoming movie or TV series are you most excited about in 2020?

A. I squealed with glee watching the premiere of Better Call Saul. And holy crap, I can’t wait for the new season of Succession. Also: No Time to Die. A Bond film directed by Cary Fukunaga with Phoebe Waller-Bridge as a credited writer? Yes, please.

Q. What are you working on right now?

A. I’m deep in two projects: one is a flipped zombie drama, a post-apocalyptic American allegory where the zombies are the good guys; and the other is a serialized crime drama about an FBI agent investigating a group of InCel terrorists. (I’d say there’s a 95% chance I’m on an FBI watchlist based on my Google search history alone, but I wouldn’t have it any other way.)