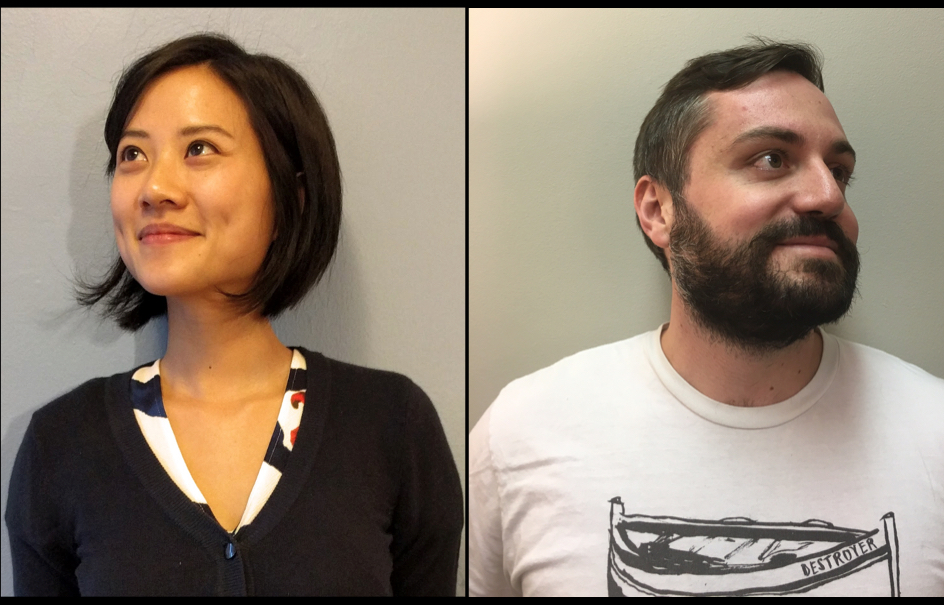 Q. How did you become a writing team?

We were sophomores in the Hasty Pudding Theatricals (Kathleen was on tech crew, Brian was in the cast) and decided to comp the script together for the following year. We ended up writing the show as juniors in 2008—our show was called Fable Attraction and took place in a fairytale kingdom. We had a character who was a racist unicorn, if that gives you some idea of where we were at creatively at the time. That process—from comping the script to writing revision after revision, being accountable to an entire creative team, sitting in a tiny room in Adams House for hours—has definitely molded us into the writers we are today. (In other words, we missed Third Eye Blind at Yardfest in order to rewrite our script and we’re still a little sad about it).

Q. What is your writing process? You two must have a good groove/system going by now.

For about 3 years we were long-distance writing partners, so we wrote together exclusively over video chat and by exchanging scenes and drafts via email. We don’t typically write a first draft of anything together; instead, once we’ve roughly outlined a show, we’ll assign one another individual scenes or entire sections of the script, then we’ll swap and edit each other’s drafts and go back and forth until we’ve both done a pass on everything several times. Once the entire project is drafted, we get back together and go through the whole thing line by line until our laptops overheat and explode.

Now that we’re both in LA., the process is the same, except that our long chats at the beginning and end are in person, and no longer made possible by the good people at Google Hangouts.

Q. When did you first get involved with Harvardwood?

BP. After graduation, we would see each other at this or that alumni weekend and talk about writing together again, but we kept putting it off. We both had normal office jobs at the time and weren’t really sure where to start. But then in 2013 we were at a friend’s wedding when Kathleen pitched me this idea for a TV show she had been kicking around for a while; the main character was loosely based on her experience in high school. I was like, *ding*ding*ding* yes, we have to do this now.

KC. I think we signed up for Harvardwood the very next week; we figured we had some major catching up to do. We were working on scripts after (and sometimes during, I’ll be honest) our day jobs, and we weren’t even in the same city. It wasn’t long after joining we heard about the Harvardwood Writing Competition and decided to go for it.

The Writing Competition gave us the kick in the pants we needed to actually sit down and write our first pilot together. It was great because we finally had a deadline; we could say to each other, “Okay, this script has to be good enough to submit by this date.” The night we found out we won, one of us said to the other on the phone, “This is great! Let’s write another one!” It was a huge boost of confidence for us; we immediately wanted to dive right back in and write a second script.

We got some great advice from our Harvardwood mentor (even though we still weren’t in LA yet, so we had to meet via conference call). Once we had two sample pilots we were proud of and had gone through the whole process of showing them around, getting more notes, revising even more, and so on, we started working with our amazing manager who coaxed us out to LA and helped us find an agent who would represent us as a team.

Q. How did you come to be staffed together on Great News?

A lot of meetings and a lot of luck. We’ve gone through this whole process as a team—from writing scripts, getting repped, and so forth—we are basically conjoined twins at this point.

Q. Can you tell us what a typical day in the Great News writing room looks like?

In the first few weeks of working on a season, we sit around a large table with other writers, who are all incredibly funny and smart, and have a long, guided conversation for the entire day. We work through story ideas, pitch jokes on those stories, get distracted by something on the internet, get super excited when lunch comes, then keep talking about and working through more ideas. Tasks can vary as each consecutive episode gets written, or when we go into production, but for staff writers almost everything happens around the table.

Q.  Do you already have any funny stories from your time on Great News that you can share?

BP. I think they would all sound like dumb inside jokes or complete nonsense. We do laugh a lot though and watch a lot of videos. I realize I’m making it sound like a lame sleepover.

KC. I love how we already watch more YouTube videos in the writers’ room than I ever did when I actually worked at YouTube. It did not take long for us to start looking into weird, dark corners of the web trying to make each other laugh.

BP. I believe a writers’ room should be sharing as many memes as possible. I can’t wait to show everyone my Tumblr soon.

Q.  Tell us a bit about Great News.  How is different from other comedy shows currently on the air and what should we expect?

Great News is about a producer at a cable news show (Briga Heelan) whose mom (Andrea Martin) lands an internship on the show. So the show is grounded in this great mother-daughter relationship but is also full of workplace shenanigans. We refuse to work on any project in which there are no shenanigans.

Q. I am sure working on Great News keeps you sufficiently busy, but are there any additional projects you are currently working on that you would like to share?

Please read our McSweeney’s list that came out on Father’s Day this year. It is all we have in terms of a web presence.

Q. What advice do you have for any aspiring television writers?

Write many, many drafts that are very, very different from each other, and don’t be afraid have people read your stuff and give you notes. One of the great things about being a writing team is getting built-in, immediate feedback, but even then, we always need other people smarter than us around to read our stuff and tell us honestly when we’ve made one poop joke too many.