Voting begins for Harvard's Board of Overseers and HAA Elected Directors

Check your inboxes for an email from Harvard University with voting information for the Board of Overseers and the Elected Directors of the Harvard Alumni Association! This year's list of nominees includes Janet Echelman AB ’87, an internationally known artist working in the public art sphere. Janet as deeply involved in both the performing and visual arts during her time at Harvard.

Given Harvardwood's mission to support members of the Harvard University community who believe in the power and purpose of the arts, media, and entertainment, and to utilize the creativity and leadership of our diverse members as forces for positive social change, we are delighted by Janet's nomination and hope you will support her too!

To vote, view your email from Harvard with your unique election validation number, and then submit your ballot online. 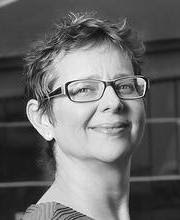 Janet Echelman is an artist who defies categorization. Combining ancient craft with material science and engineering, her experiential sculptures at the scale of buildings have become inviting focal points for civic life on five continents. Named an Architectural Digest Innovator for “changing the very essence of urban space,” she has received a Guggenheim Fellowship and the Smithsonian American Ingenuity Award.

As a visiting professor at MIT, Echelman led a collaboration of engineering, computer science, and architecture graduate students. Next year she will teach at Princeton. Beyond academia, she seeks to address wider audiences. Her work was ranked first on Oprah’s list of “50 Things That Will Make You Say ‘Wow!’” Her TED talk, “Taking Imagination Seriously,” has more than two million views and has been translated into 37 languages.

“Harvard opened up the world to me. When I first arrived, a 17-year-old from public school in Florida, I stumbled into my first art class by accident. Decades later, my world expanded again when I returned to Harvard as a Loeb Fellow, taking courses at Harvard’s graduate Schools of design, law, business, and government. Those experiences enabled me to expand the reach of my art, to harness the potential of public space to bring people together. Now, as Harvard embarks on the largest campus expansion in its history, I am ready to serve our alma mater.”