WORRIED YOU MIGHT NOT FIND A JOB IN THE COLLAPSING FINANCIAL INDUSTRY? CHECK OUT A FUN ALTERNATIVE...

Perhaps you’ve heard the news? Wall Street is in trouble, recession is a reality and job offers are harder to come by than a handle of good vodka at a room party. In light of such, how shall we say, unpleasant developments, many Harvard students are forced to become creative in their job search. So put down the Vault Guide to Consulting, leave the business casual attire alone for a moment, and take a moment to explore an often overlooked – but highly visible - industry.

Started in 1999 by Mia Riverton, Stacy Cohen, and Adam Fratto, Harvardwood has grown from a fledgling listserv to an organization 2200 members strong. Based in Los Angeles, there are Chapters in Boston, Chicago, London, Los Angeles, New York, San Francisco, Toronto, and Washington, D.C. Internationally, there are Harvardwood members living and working throughout other areas of North America as well as Europe, Latin America, Asia and Australia.

And no, Harvardwood isn’t just a resource for those who have a collection of pretty headshots and vague notions of fame a la Nate Dern (Beauty and The Geek, season 3). “We’ve really grown in diversity,” Mia Riverton says. “We have members currently working in film and TV, design, high-tech, books, music, radio, publishing, journalism – it’s really all aspects of arts, media and entertainment.”

When asked about Harvardwood’s beginnings, Riverton points to the lack of formal support from Harvard as inspiration. “While I was at Harvard I knew I wanted to go into the entertainment industry and found there were no career resources for me,” Mia says. “Even to this day they’re not as good at it as they are with ‘traditional’ careers such as law or medicine. And it’s certainly very paltry compared to schools with historically stronger ties to the arts and entertainment industry,”

“Harvard University bureaucracy has always frowned on Hollywood as The Wild West, certainly not the most prestigious industry to go into.”

But when all is said and done, what can Harvardwood do for you, dear undergraduate? Turns out there’s plenty of resources just waiting to be accessed. Current students can become members by logging onto Harvardwood.org and creating an account. Be warned that the yearly dues are $40. Still, if you can’t cough up the cash for full membership, anyone can join as an affiliate to see the names of people in the industry, the types of positions offered, and the opportunities that Harvardwood provides for its members. With any kind of membership - whether full or affiliate - you’ll receive two regular e-publications: Harvardwood Weekly, and the monthly newsletter Harvardwood Highlights.

And of course, there is Harvardwood 101. During intersession each year, this career exploration program brings Harvard undergraduates to Los Angeles to give them a sneak peek behind the glamorous curtains of the entertainment industry. The program began in 2003 and is cosponsored by the Office for the Arts and the Office of Career Services. Harvardwood 101 activities include visits to studios, working film sets, talent agencies, production companies, and music labels, as well as panels with industry professionals. Applications are accepted in November, and applicants must be a full member to apply.

Last but certainly not least, there is the Harvardwood Summer Internship Program (HSIP) for students trying to get a foot in the door of the arts, entertainment and media industries. HSIP provides a list of summer internship opportunities, and holds career-related activities throughout the summer for participating students and companies in NYC and LA. Accessed at www.Harvardwood.org, HSIP opportunities are announced and applications accepted beginning in March.

This fall saw the creation of Harvardwood Undergraduate Student Organization, a place for current undergraduates to explore the various aspects of and opportunities in the arts, entertainment and media industries.

“The Harvardwood Undergraduate Student Organization hopes to educate Harvard undergrads about the entertainment industry, provide resources to gain valuable experience in the industry (from production to direction to writing to marketing and beyond), and give direct access to the knowledge and experiences of Harvard alums that now have careers in the entertainment industry,” says HUSO President Ansley Rubinstein.

To express interest in joining HUSO, send an email to Ansley Rubinstein at [email protected] Please include your name, year, and what areas of the entertainment industry you are interested in. Opportunities are available for general membership, as well as board positions. 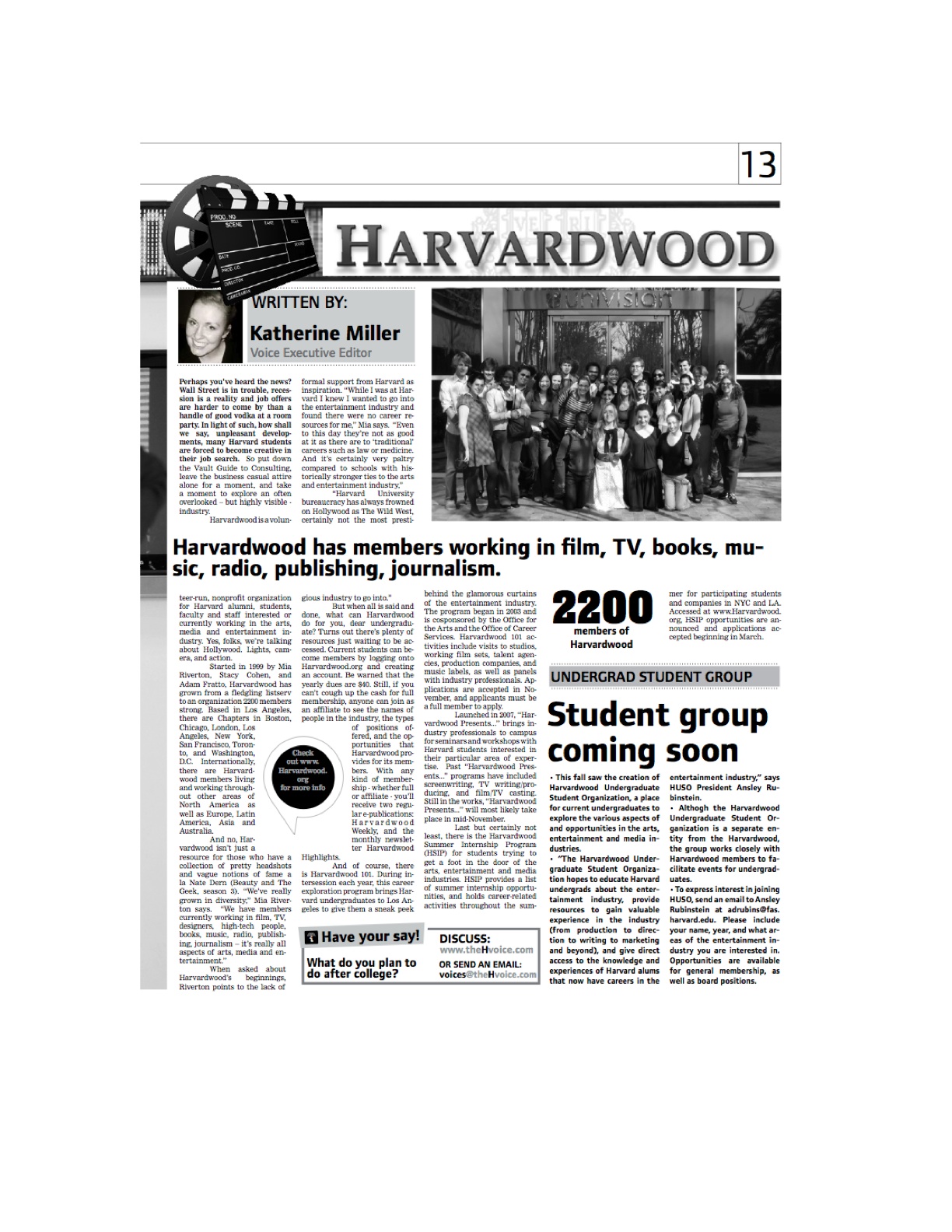