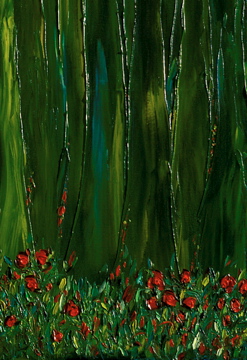 "Congratulations!"
"Congratulations? On what? I didn't tell you I was doing an art show tonight. - ?"
"What art show?"
"Why are you congratulating me?" It was clear that neither of us knew what the other one was talking about.
"I was congratulating you on your Anniversary. It's three years, right?"
"OMG. I totally forgot!" In fact, it was my Anniversary. Three years ago today they were wheeling me back into the O.R. to remove half of my vital organs because of a cancer. And here I was - today - about to put a painting into an art show! I thought about it for a second.
"Wow! It's amazing how much things can change in the course of a few years."
"Thanks for remembering," I said. "Can you believe it? If I hadn't made it, I never would have gotten to discover that I could paint! Thank God!"

After we spoke, I glanced down at the poem, a poem which I thought reflected my concerns over Iraq. And I realized that unknowingly I had also written about the cancer as well.

In the Emerald Forest
the Tree of Life does firmly stand
Guarding us from wanton evil
that may seek to harm each man.

Here in the Emerald Forest
there is no misery or pain
And I hear God all around me
singing blissfully again.

You can hear him truly
through the streams and the voices of the whippoorwill
But you must stop. And listen -
and stand very, very
still.

In the Emerald Forest
there's no more sense of doom and gloom
With birds singing all around and
the jeweled forest floor in bloom.

And I love this gentle giant
I seek my refuge in the land and in this tree
For underneath its caring bower's
shade and quiet. . .. peace and serenity.

How The Emerald Forest found its home ~
I received an invitation early in 2003 to the Wellness Community's Charity Fundraiser to be held in March. As a full time artist and as a cancer survivor (with outstanding hospital bills) I could ill afford to attend the event. But I wanted to contribute somehow. I noticed on the invitation that there would be a silent auction. I contacted Grant & Company that was orchestrating that part of the event and made them an offer of a piece of artwork.

"Who is the artist?" queried the woman from Grant & Co.
"I am."
"Well, not to be rude or anything - but who are you?"
I gave her my name.
"Funny. I never heard of you. How long have you been painting and what sort of auction track record do you have?" was the retort. There was no mincing of words.
"Well, I started painting at the end of 2001. I don't have an 'auction record' per se. But people love the paintings. I'm sure you would be able to sell it and raise some money. I am a cancer survivor, and I would like to make a contribution."
"Look. Not to be rude or anything, but the paintings that are being donated are by famous artists, not unknowns. They are names that everyone would recognize. I'm sure this was a very nice offer, but it's really not in line with what we are looking for for this event. There are going to be some very important people there. We're not looking for fair art by local artists."
"I understand." (pause) "Can I just bring in one of my paintings, and then if you don't think it's right for you, that will be fine? I think it would be helpful if you saw one of the pieces."
"Okay then. Why don't you just come on by our offices. We're on Wilshire Boulevard. I'll have the secretary give you our address."

I looked over the paintings that I had created immediately after receiving the invitation. They were different from the 3047 series. These paintings included trees. I called it "The Tree of Life" Series. There was The Wishing Tree, The Pine Forest and the earliest beginnings of The Enchanted Forest. I liked The Emerald Forest best, though I didn't want to part with it - but then I caught myself - realizing that if I was going to make a donation, it needed it to be exactly the piece I liked the most. I pulled it down off of my easel and drove towards Downtown. When I arrived at Grant & Co., I was ushered toward one of the back offices. Office staff stopped to stare at the painting as I walked past.

"I really like that," said one of the women passing by, just as I was being greeted by the young lady in charge of the auction. She took one look at The Emerald Forest and immediately changed her previous position. Her tone softened remarkably and she spoke to me with a bit more respect. The painting went into the auction and brought in several thousand dollars for the charity. I was told of the 'tangible' items, it was the single most profitable item in the auction! And that gave me a new and bigger idea! I never really understood "where" these paintings were coming from, since I never took any painting classes and frankly didn't know what I was doing when I was painting. But now I at least knew why I was given this gift. It was beginning to make sense.