Laura Kanji AB '19 describes how the PBHA's Mission Hill After School Program utilized the Heroes grant to fund clay-based art workshops for its students this fall.

This fall, Mission Hill After School Program has been implementing clay-based art workshops with the funds provided by the Harvardwood Heroes award. These workshops have been wonderful opportunities for our students to use clay as a unique medium for their artistic creations. Out of the 5 classrooms that make up our program, 3 have had the opportunity to participate in these workshops. We are excited to purchase materials in the spring for the final two classrooms to be able to participate. The Harvardwood Heroes Grant has helped make these workshops a reality, as it has allowed us to purchase materials like air-dry clay, clay sculpting tools, and paint. Previously these materials were inaccessible to our program due to their high cost and our constrained budget.

Over the course of many years, there have been a great number of acid attacks in India against Indian women. Sadly, these acids are very easily purchased, with sulfuric acid being one of the most common acids used in these acts of suffering. The attacks are done in a private or a public place. These women are either permanently disfigured, permanently disabled, and/or killed as a result of these attacks. The attackers see this as a type of honor violence in which they believe they are carrying out an act that upholds the honor of a family or a community. They believe these women have brought permanent dishonor to their family or community, and they believe that a permanent physical punishment should be carried out as a consequence. Very often, these attackers are members of the victim’s close or extended family. To more intensely reflect on these acid attacks of immeasurable suffering, I created an artwork. 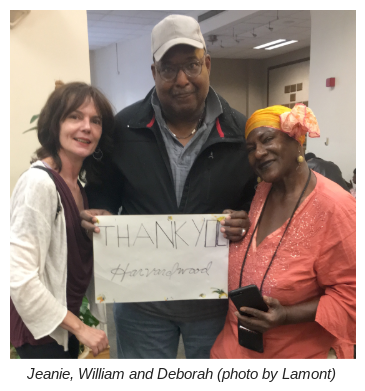 Our photo workshop, which was launched in the fall of 2017, uses the power of photography and social media as tools for self-expression and creativity, and for bringing people together. Follow us on Instagram.

Celebrate the first 5 years of our Heroes community service program by catching up with the 2013-2017 Harvardwood Heroes grant recipients!

After reviewing numerous outstanding community service proposals, we are delighted to present to you the following 2018 Harvardwood Heroes. Each grant recipient will receive $500 to use at his/her discretion.

This year's Heroes are:

This April, apply to become a 2018 Harvardwood Heroes and receive a $500 unrestricted grant! The deadline to submit your grant proposal is April 15, 2018.

Harvardwood awards $500 grants* to applicants who have demonstrated a distinguished level of service to their organizations of choice. Every year, grant winners will be determined by the strength of their proposal. They will receive the first $250 upon announcement of the winners and the balance of the grant upon submission of a final essay six months later.

Find out what Rylie Zhang AB '13 has been up to with her nonprofit, No Limits Media, since receiving a 2016 Harvardwood Heroes grant.

"In 2016, I had proposed that the Harvardwood Heroes grant be used for supporting students in film classes produce films involving disability-related content or disabled actors / filmmakers.... We have successfully sponsored one student from Northwestern to produce a short disability-related film; we are looking forward to be involved in the process this year and next year. In addition, the Harvardwood Heroes grant has helped us move forward with several other No Limits Media initiatives. The grant has helped provide initial funding for a new No Limits Media documentary called Rolling Across America. The focus of the film will be to show for the first time the disability community of the United States. The documentary’s host is Chris Waddell, a 13-time Paralympic champion and the co-anchor of NBC’s 2016 Paralympic Games coverage. Chris will travel around the country highlighting a variety of people with disabilities and their accomplishments.... Thank you Harvardwood for providing this generous grant and furthering our mission of changing the image of disability in society!"