The Harvardwood Writers Competition (HWC) was founded in 2006 with the aim of recognizing superior work by Harvard writers and giving these talented individuals the opportunity to gain industry exposure. View the list of past HWC winners (2021 winners pictured below). 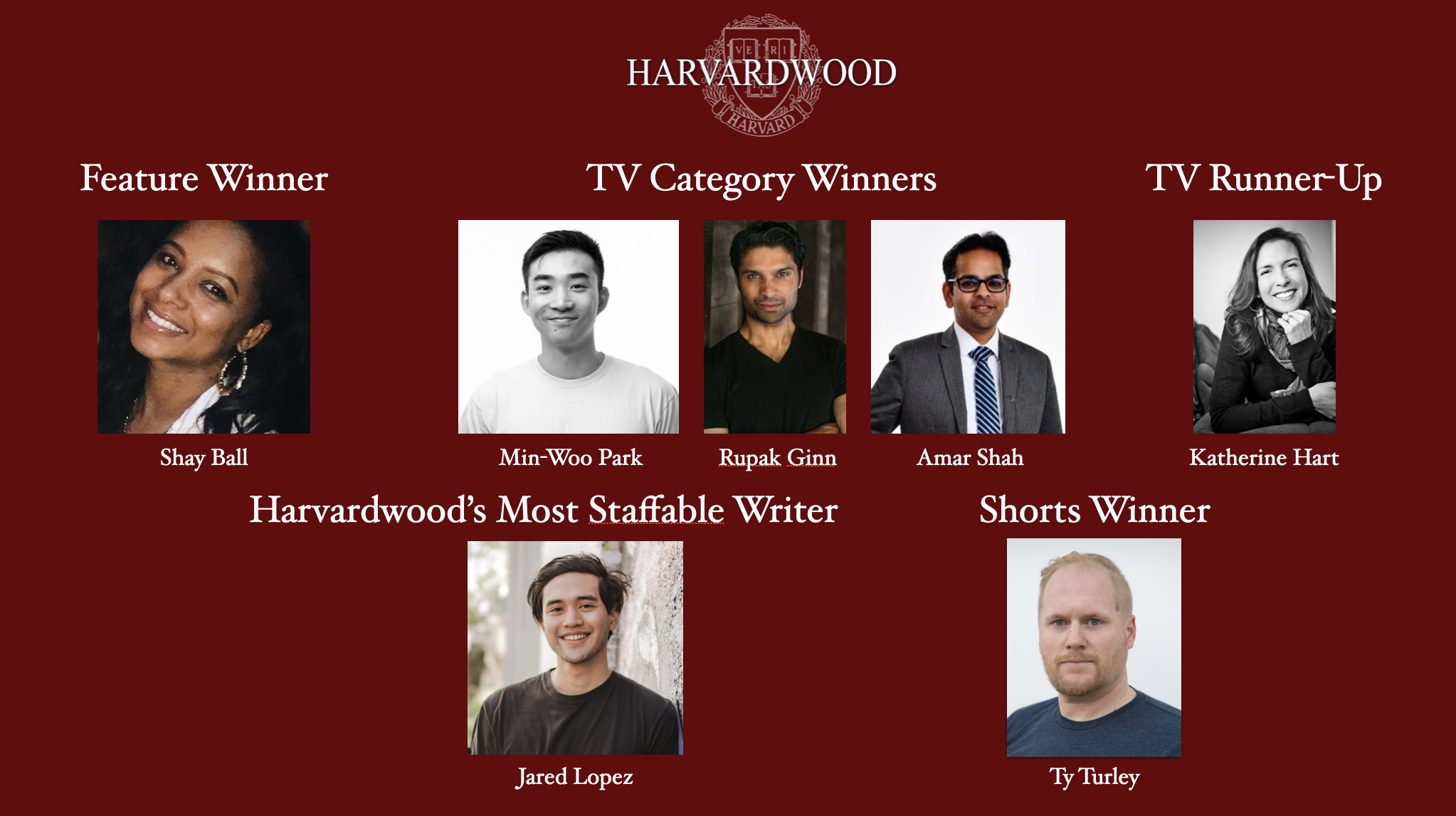 **All submission instructions for the 2022 Harvardwood Writers Competition are below, and the submission form(s) will emailed to you upon completion of payment.

Previous HWC winners and Most Staffable List writers have been covered by Deadline.

Industry professionals, with support from the Harvardwood Board of Directors, evaluate all scripts entered to determine the winner and runner up (if applicable) from each category. Results are announced on a rolling basis, strategically, in line with industry trends. HWC judges are working executives and creatives, with a balance of gender, race and other diversity and experience across various fields of entertainment.

HWC submitters can opt to receive judging comments and feedback for each script submitted. The notes are aimed to illuminate judges' reactions to your script (beyond the numerical average of your scores received by semi-finalists and finalists) and may be useful to you for future rewrites.

Winning scripts will be read by an array of industry professionals, including literary managers, agents, and development professionals. All winners will receive a mentor and a small cash award.

Applicants must agree to the terms and conditions of the Harvardwood Writers Competition Release Form.

The entry fee per script will be

If you'd like to receive reader feedback and notes, the additional fees (exclusive of the submission fee) are as follows:

Your script must have an anonymous cover sheet in the following format:

Title (if a Pilot, then Title of Show)

State on your cover sheet: "Submitted for evaluation in advance of the Harvardwood Writers Competition and Harvardwood's Most Staffable Writers list. If you have further questions or would like to contact the writer, please email Justin White at [email protected]"

Each individual may submit no more than TWO SCRIPTS per category.* Repeat entries are allowed, only if the script has been rewritten since it was entered in a previous contest.

All genres are permitted. Scripts should be submitted in PDF format using standard script margins and conventions, and body pages must be numbered. Submissions must be in English.

Collaborative work, undertaken by no more than two writers, is eligible, provided that at least one writing partner is a dues-current Full Member of Harvardwood. Only one entry fee is required per script. Writing partners selected as winners will divide the prize equally.

Entered scripts may not have been previously optioned, sold, or produced (in the case of shorts, non-equity readings/productions will not be deemed to disqualify work from entry). Scripts must be the original work of the author(s), 18 years of age or older. No substitutions of new drafts or corrected pages for script entries will be accepted under any circumstances.

Participants must pay at the link below to receive a confirmation email which includes the link to submit their script(s).

If you have any questions about the Writers Competition, please email us.