Trailer for Married & Counting, an award-winning documentary by Allan Piper '96, about two men who celebrate 25 years together by traveling the country to get married in every state that will let them. Narrated by George Takei. "One of the most relevant, heart-felt and timely documentaries of the year... a brilliant gem" -Huffington Post.

The award-winning documentary "AshBash: a love story" (directed by Heidi Sullivan, ’89; HLS ’97) will be screening at the historic Regent Theatre as part of the Arlington (MA) International Film Festival on Saturday October 20, 2012 at 8:50pm (Q&A with director and subject to follow the screening).

You can be on the cutting edge of a revolution in mass media, by backing a vital documentary that impacts one of the most important issues of our day, our health.

It Came From Above 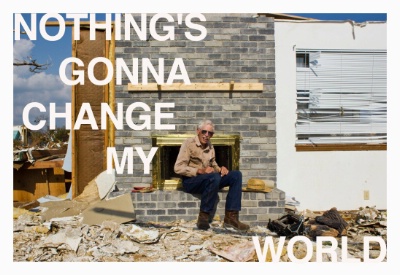 On May 22nd, 2011, Joplin, MO was hit by an EF5 tornado killing 160 people and destroying over 2,000 homes, hundreds of businesses and the local schools. It was one of the deadliest and most destructive tornadoes in history.

In the days following the natural disaster, a woman started collecting photos that were found in the rubble.  Abi Almandinger is now on a mission to return thousands of displaced photos to their rightful owners.  Los Angeles based filmmaker, Erica Tremblay, returned to her hometown to document five of these families.  She found an unconventional story on life, death, love, heroism and the human spirit.

It Came From Above, has concluded principal photography and needs to raise money for all post-production costs including editing, audio, film development and music.

Donors are encouraged to visit our Kickstarter.com project page and make donations via that method: http://www.kickstarter.com/projects/ericatrembay/it-came-from-above-the-joplin-mo-tornado?ref=live

We are also looking for additional investors. Prospective investors should contact Bernard Parham '06 directly via phone 423.505.8869 or email [email protected] to discuss terms.

Harvard alumni Lily Erlinger '10 and Becky Cooper '10-'11 teamed up with No nonsense to make a film about youth homelessness in the U.S. Their 8-minute documentary, "We Were Strangers," is now part of a film competition, winner determined by most number of Facebook votes. Please take a second to help them out by watching their film and casting a vote here: https://www.facebook.com/nononsense?sk=app_251858208180653. You can vote every day until September 30th. For a preview, check out the trailer: http://vimeo.com/28333507

This is the trailer for "Honest Man," a feature documentary film that I produced and edited about Pennsylvania State Treasurer R. Budd Dwyer. Dwyer was convicted of bribery and killed himself on television the day before his sentencing.

In the style of Spellbound and Mad Hot Ballroom, we are developing a documentary about middle school students who compete in the annual Los Angeles County Mock Trial Competition.  During last year’s competition, our development team observed 63 middle and high schools in practices and competition rounds, more than half of all of the schools that participated.  By observing these teams and their teachers, coaches, parents and students, we saw firsthand what makes mock trial so exciting to compete in and so compelling to watch.  We also worked closely with the Constitutional Rights Foundation, the non-profit organization that runs the program, whose leaders enthusiastically support the filming of a documentary.

We seek an enthusiastic and experienced documentary film producer and/or director to join our team and help us bring our vision of a mock trial documentary to life.  Please click here to read the treatment and for more information:http://www.newmedialegal.com/development.html

Posted for a friend of mine....

----
I'm writing in regards to a documentary film I'm making about the challenging and courageous life of actors. I'm beginning a fund-raising campaign and looking for an Executive Producer to help spearhead the effort. I'm open to any and all support and suggestions so if this sounds interesting, please read on and let me know what you think:

The UNTITLED ACTOR DOCUMENTARY explores what it means to be an artist by examining and juxtaposing the craft and the commerce of the acting experience. It will contrast the nurturing, learning-oriented acting class and the commercial realities of the casting process, with the 2 main characters—and windows into these worlds—being an acting teacher and a casting director, the one who teaches actors their craft and the one who judges their commercial potential.

Through observational scenes and interviews with the acting teacher, casting director, actors and other industry insiders, the film will meditate on the artistic struggle of actors, notions of success, and if, when or why artists should abandon or continue pursuing their dreams. As an independent filmmaker who faces these issues myself, I believe the film will speak to and for anyone who has ever tried to make a living from their art.

I’ve already shot the acting class portion of the film and am speaking with feature film casting directors about shooting the second part. I recently acquired fiscal sponsorship from the IFP so that I can accept tax-deductible donations and I’ve begun searching for individuals and foundations that support the arts and an executive producer to spearhead the fund-raising effort.

You can view a teaser comprised of footage from the acting class and learn more about the film and me at www.oxbowlakefilms.com. I look forward to hearing your thoughts about the project and any support or feedback you might be able to provide!

Thanks for your consideration,

This is the fundraising teaser for (NO) LAUGHING MATTER, a documentary film project directed by Vanessa Rousselot and produced by Ned Gubbins (AB '94).

Hello all, this is a post for the documentary I've been directing. We're about to hit the ground running on post-production and need as much language support. If you think you no someone who might be willing to come on board, don't hesitate to forward this to them. All love, Cary
---------------------

Toy Closet Films is a boutique development and production company based in New York City that specializes in creating original content for film, television and emerging media. We are currently producing Without Shepherds - a feature documentary on Pakistan that looks beyond the headlines and breaks open the stereotypes of "the most dangerous country in the world.” A partnership of an American filmmaker and leaders of an emerging Pakistani film community travel across the country to learn what life is like at the heart of the war on terror, and find six unique characters that show us the progressive side of this misunderstood country.

We are searching for post-production staff with strong skills in the languages of Pakistan. Urdu and Pashtu primarily are required but we also need occasional support also have coverage in regional languages including Punjabi, Saraiki, Sindhi and Hind Koh.

Assistant Editors – would be responsible for working hands-on the film, initially screening footage and preparing sample sequences and selections for the editorial team to review, and based on aptitude will be expected to specialize in particular areas of the film to support the lead editor over the duration of the project. Must have strong proficiency on Final Cut Pro and significant editing experience. Hours will depend on talent of candidate, language skills, and may vary throughout the different stages of the project – from 20-40 hours/week. Salary also negotiated based on contribution and experience.

Translators and Interns - will be expected to serve a support role to the creative team as both linguists and office assistants. Significant time spent reviewing footage and transcriptions, as well as helping perform administrative duties on the production. Exposure to film and Final Cut Pro are recommended. Enthusiasm for the subject and an eagerness to learn are all that’s required. Stipend TBD. 2-3 days/week.

All applicants must have good time management and strong interpersonal skills, and be passionate about film. Ideal candidates may be current undergraduate/graduate students enrolled in film/arts/media programs or studying South Asian history, culture and languages. Residence in the New York City area a must. Start date Feb 1 (interns) and Feb 10 (editors).

Please forward current resume with applicable professional experiences and language skill breakdown to [email protected] Must be proficient with Mac computers, and have a working knowledge of and Excel, Word and PowerPoint. Please no phone calls.