In order to have success in the current marketplace, you need to do three things:

The best writers are able to nail all three of those objectives in their first scene.

Learn a step-by-step process for designing and executing your opening in a way that can truly excite a reader and make them absolutely want to keep reading.

These are the exact same techniques used in the openings of such projects as Fleabag, Game of Thrones, Orange Is the New Black, Breaking Bad, Atlanta, Stranger Things, 30 Rock, Seinfeld, Succession, Once Upon A Time in Hollywood, Moonlight, Lady Bird, Parasite and countless others.

Most scripts are rejected after the first scene. Don't let that happen to you. 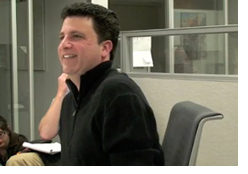 Corey teaches screenwriting and television writing through online workshops, available for writers to attend from all over the world. His students have gone on to sell scripts to Warner Brothers, Paramount, Sony Pictures, Disney, Fox, MGM, Universal, Showtime, FX, USA Network, CBS, ABC, Netflix, Amazon, NBC, HBO, MTV and AMC. Others have been staffed on such shows as Stranger Things,Community, Justified, Mr. Robot, The Mentalist, Mozart in the Jungle, The Walking Dead, TheBlacklist, Marvel’s Agents of Shield, You’re the Worst, Pretty Little Liars, Jane the Virgin, This is Us, Treme, Togetherness, BoJack Horseman, The Leftovers, Big Little Lies, and Succession.