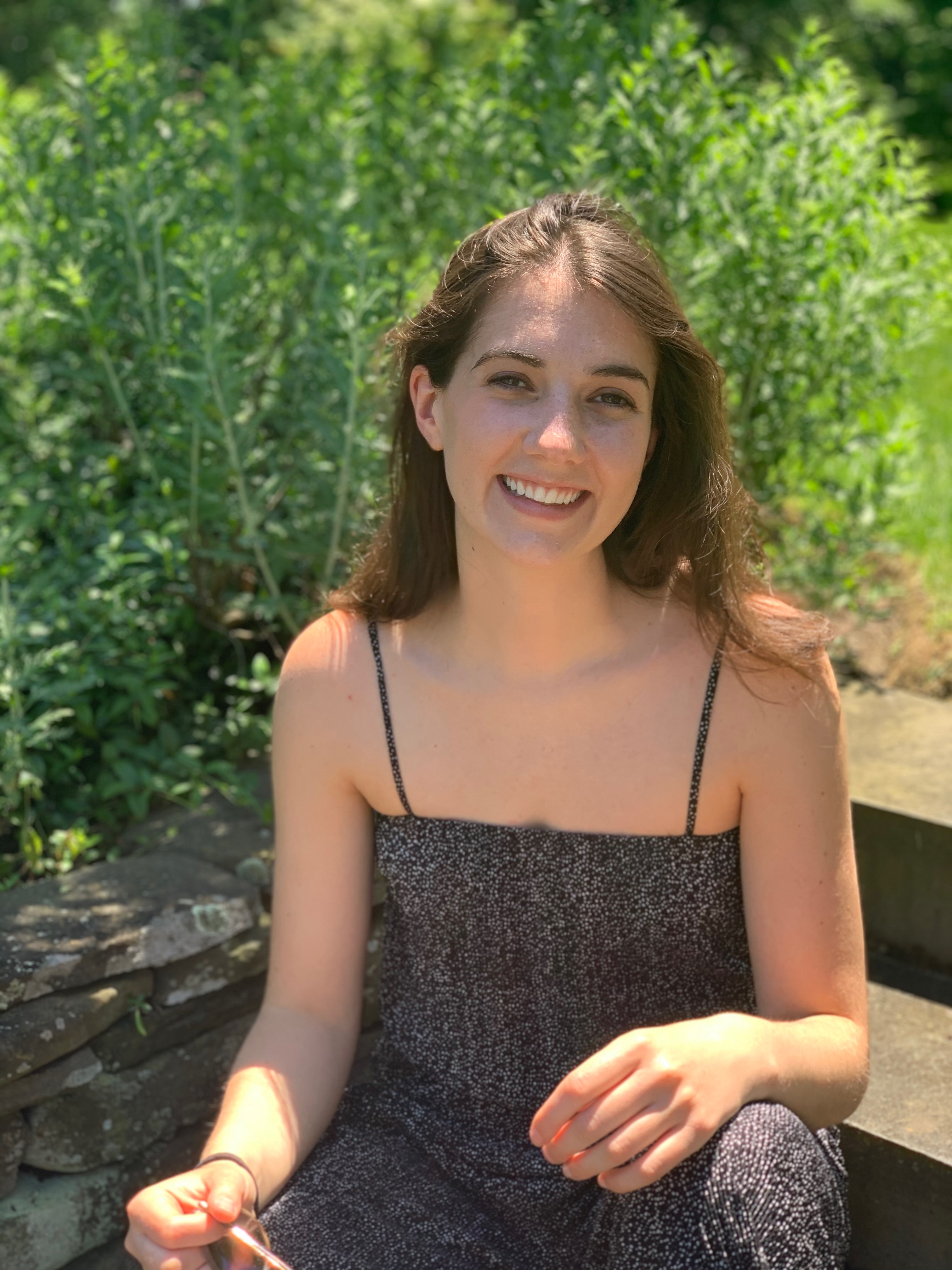 Carly Hillman AB '15 is a segment producer for The Late Show with Stephen Colbert. Originally from Pennsylvania, her interest in news led her to an internship with The Colbert Report. Since graduating from Harvard, she has worked on The Late Show.

Q. Let’s start with an introduction. Could you tell me about your background, where you’re from, and what you’re doing?

A. My name is Carly, and I grew up in Pennsylvania, and I went to Harvard obviously, which is why I’m doing this interview! I now work at The Late Show with Stephen Colbert as a segment producer for the guest interviews.

Q. Could you tell me more about your current role as a segment producer for The Late Show—what does that entail?

A. I work as a segment producer specifically on the guest interviews. Once a guest is booked on the show, I’ll get assigned probably a few weeks out. And there’s basically two parts of producing a guest interview. The first part is the actual substance of the interview, so we’ll do a pre-interview with the guest on the phone where we talk about the interview with Stephen, what’s going to happen. Then we have a meeting with Stephen to talk about it with him.

It’s a strange process. The way we describe it at the show sometimes is that it’s like setting two people up on a first date. You want each of the parties to know a little about each other. You want them to be excited to meet. Maybe you’ve told one of them you have to ask about this really funny story about his mom or something like that. It’s like being a very over-involved friend, setting people up to have hopefully a good conversation.

The second part is the logistical aspect. We’re communicating with the rest of the show. We’re communicating with the control room, the various departments about any of the production elements associated with the interview. So if there’s a photo, we need to clear it with legal, we need to get it printed. If there is a costume, we need to talk to the costume department to figure out what works best for them. We need to be in touch with the stage managers, the production team. We’re the first stop for anything concerning the guests and basically in charge of communicating all the information outward.

So the great thing about it is that every day is totally different. And also, especially with The Late Show, we’re an entertainment show, comedy show, political show, so the different kinds of guests I get to produce can vary so much day to day. That’s something I definitely value.

Q. What have been some of your favorite interviews to coordinate?

A. That’s always a tough question. I feel like I can’t choose favorites, but I’d say that I like interviews where it’s something different than you would necessarily normally see on late-night television. One that comes to mind is that I got to work on the Jonathan van Ness interview, when he was speaking about being HIV positive, dealing with the trauma, and they ended up getting into the Supreme Court talking about Title VII, and it was just moving, funny, and genuine. But also, it was something you wouldn’t necessarily expect to see on a late-night show, and that’s something I really value. I do not take credit at all for the conversation going great because Jonathan and Stephen are fantastic, but it was just such an interesting time for [the interview] to be on.

But things like that, where’s it’s a really genuine moment between Stephen and the guest, is always when I feel most satisfied and proud. Seeing two people having a good conversation is always going to be better than when a guest is nervous. When two people are genuinely excited to be talking to each other, that’s always what we’re striving for.

Q. You mentioned what you love about what you do. Are there any challenges or things you find difficult? And how has doing this job remotely changed what you’re doing?

A. There’s nothing I don’t like about my job (especially if my boss is reading this). I actually do feel so lucky. I love what I do and I love the people I work with, and that makes such a huge difference. In terms of working remotely, it certainly was a challenge, especially at first.

Our production team is incredible. We have people working into every hour of the night figuring out how we’re going to produce the show remotely. It was like watching a mom pick up a car with a child stuck underneath. That’s what it felt like. And that was pretty incredible to watch. We are weirdly getting into the groove a little bit. Working on guest interviews especially, of all the departments of our show, it’s not necessarily the most different. But in terms of actual conversation, it feels completely different. Producing an interview without an audience changes the nature of the conversation. So helping that interview in itself is a very specific art form, and the audience is an absolutely crucial part of that. It’s been interesting to figure out how we can have these conversations without an audience and what the “late-night conversation” without the audience laughing is, because to me it’s completely different; it’s like doing a dance to different music.

Q. What’s one way hosting an interview without an audience has changed?

A. It depends on the guest. If it’s a news guest, it’s less different. But in terms of an entertainment guest, I think that there’s the quintessential Late Night anecdote, which is just going to be different when you’re not pacing it with an audience’s laughter. At least for me, I’ve been trying to talk to the guests about that and point out what the differences might be. It’s all a learning experience. It’s been fascinating to be a part of the show while everyone is experiencing this strange circumstance. It’s definitely been strange.

Q. Could you talk about where you started and the steps you took to get where you are now?

A. I worked at my local news station in high school, which led to a few other news internships. Then my first taste of comedy and late night was when I started at The Colbert Report as an intern. That was the summer before my senior year. I never thought it was in the realm of possibility that I could get a job there full time.

I can still remember: I was standing right in front of Widener by the steps that go up to Lamont, and I got a call from my old boss at The Colbert Report, and she was asking me to interview for an assistant position. That was the happiest I’ve ever been in my entire life. I started at The Late Show when the show was in pre-production, when Stephen was taking over for Letterman. I was a talent assistant. I spent a year doing that, which was basically handling the logistics of guest arrivals, greeting the guests when they came to the show, walking them to makeup, getting them water, cleaning the greenrooms—a great experience to get to know what it was like to work around celebrities in a low-stakes way.

I really learned such invaluable skills. I also have to credit my incredible bosses. They really care about mentoring young staffers, helping us learn on the job, and they look out for our development, which I know is not always the case.

Q. Do you feel like you’ve grown into the role?

This is advice I’d give to young people: working on a new show is such a great chance to learn because you really get to see how it gets built, what kinds of jobs you need, there’s always opportunities to step in when they realize, “Oh man, we really should have another associate producer working on the segment, but everyone’s totally strapped,” and you can have that opportunity to step into a place. At a more established show, the production lines are all refined and clearer. I think that working on a show when it was first getting off the ground was invaluable.

Q. Would you give any other advice to your former self?

A. The funny thing about Harvard is there are so many things that I’m like, “Why did I not try and work on the Hasty Pudding Theatricals production side, why did I not try to join the Lampoon early on at school?” There’s all of these things where, by the time I even knew what I wanted to do, it felt a little late. But that being said, I’m grateful for every step that led me here.

Ultimately, my advice to young people is, if you want to work in TV, keep trying. It’s really hard to get your foot in the door. And especially at Harvard, where it feels like everyone has got their life figured out, recruiters coming to campus, jobs lined up after graduation. I was uploading my resume to a million job sites feeling like I was careening off a cliff. I’m grateful that I just stuck with it, and that was something harder than I thought it would be. Don't let it wear you down.

Q. That’s great advice. How did your time at Harvard influence what you’re doing now?

A. It’s funny, I had been interested in TV before I got to Harvard. I always wanted to work in news. In high school, I interned at my local news station in Pennsylvania. In many ways, my career would’ve developed separate from Harvard. It wasn’t necessarily like I discovered what I wanted to do there. But I think, looking back, it’s funny, I was an English major, which at the time felt almost indulgent. I didn’t know how it was going to apply to a career. I just loved reading and writing. It was what I enjoyed most, but I didn’t know how “useful” it would be because lots of people perpetuate that myth.

Looking back, I realize that when I’m producing a segment now, and the way that I structure my thoughts and deal with pull quotes and outline my vision of these conversations, is exactly what I did when I was writing Harvard English papers. There are these core and fundamental skills of writing and organizing your thoughts and having the confidence to speak up in an English class that built the structure for me, on top of which I could pile on more applicable TV production skills.

My time at Harvard, learning and taking classes that interested me—while not hard TV skills, they are skills I use every day in my job. Also, I was so damn intimidated by everyone at Harvard the first two years that I was scared to speak up in class, and I had to get over that. There’s no reason to be intimidated, and sometimes I think, “Maybe I can work with celebrities because I learned how to speak up in class, even when I was so intimidated by everyone around me.”

Q. Where do you see yourself in a few years?

A. I don’t really know what the future holds! I know I love working on set. I love working in TV, and I love my job right now. The nice thing about working in a job like mine is that everything is new and every day I’m learning, so I feel lucky.