The Harvard Clubs of Boston and Ireland in partnership with Harvard Clubs and shared interest groups (SIGs) from around the globe are honored and delighted to bring the next installment of their Harvard Alumni Allyship Series.

Following their successful events focusing on Anti-Racism Allyship (October) and Allyship with the LGBTQIA+ community (November), Allyship with Indigenous Peoples (February), Allyship with Asian Americans (May) this month will be a conversation with Brooke Ellison on Allyship with People with Disabilities.

Brooke Ellison, PhD is an Associate Professor at Stony Brook University, and Director of Education and Ethics at the Stony Brook Stem Cell Facility. Dr. Ellison received her undergraduate degree in cognitive neuroscience from Harvard University in 2000, followed by her Master Degree in Public Policy from the Harvard Kennedy School in 2004. After running for New York State Senate in 2006, Dr. Ellison completed her PhD in Sociology from Stony Brook University in 2012. A policy and ethics expert in stem cell research for over 15 years, Brooke has been committed to changing the perception of life-saving science. From 2007-2014, Brooke served on the Empire State Stem Cell Board, which designed New York State’s stem cell policy. 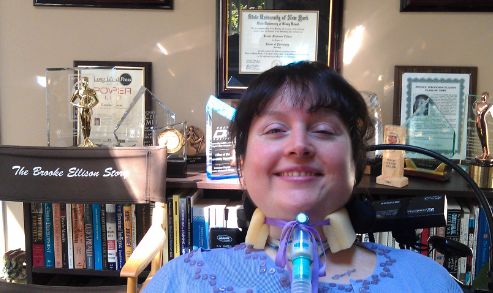