“What do we want America to be?” This is the question asked of first- and second-generation immigrant storytellers in the new anthology The Good Immigrant: 26 Writers Reflect on America. Join contributors Jade Chang (The Wangs vs. The World), Nicole Dennis-Benn (whose sophomore novel, Patsy, debuts this June), and Dani Fernandez (Ralph Breaks the Internet, “Nerdificent”) for readings and conversation in honor of Immigrant Heritage Month and to consider how Angelenos fit into the national conversation on American identity. 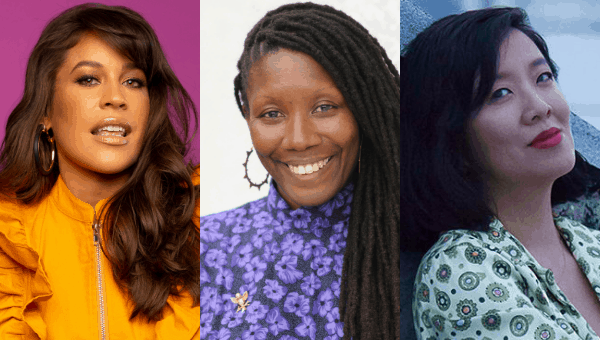 Pack a blanket and picnic on the lawn (no alcohol permitted), or for purchase from local food trucks. Book sales courtesy of Vroman’s Bookstore.

This program is presented in partnership with The Music Center, PEN America, and Scripps Presents.

Jade Chang is the author of The Wangs vs. the World, published by Houghton Mifflin Harcourt. The Wangs has been named a New York Times Editors’ Choice as well as a Best Book of the Year by Amazon, Buzzfeed, Elle, and NPR, and was awarded the VCU/Cabell First Novelist prize. The novel will be published in 12 countries. “Her book is unrelentingly fun, but it is also raw and profane—a story of fierce pride, fierce anger, and even fiercer love.” (NPR)

Nicole Dennis-Benn is the author of the novels Patsy(Liveright, 2019) and Here Comes the Sun(Liveright, 2016), which won the Lambda Literary Award, was a finalist for the National Book Critics Circle John Leonard Award, the New York Public Library’s Young Lions Fiction Award, and the Center for Fiction’s First Novel Prize, and was longlisted for the International Dublin Literary Award.

Dani Fernandez is an LA based writer, comedian, and actress. She is a host at Nerdist, has a wizarding comedy show “Live from WZRD” on VRV, and hosts a popular podcast on iHeartMedia called “Nerdificent.” She can also be seen in animated form, playing herself, in Ralph Breaks the Internet.