The Nowhere Man is a legendary figure spoken about only in whispers. It's said that when he's reached by the truly desperate and deserving, the Nowhere Man can and will do anything to protect and save them. 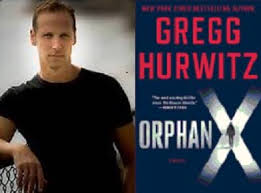 But he's no legend.

Evan Smoak is a man with skills, resources, and a personal mission to help those with nowhere else to turn. He's also a man with a dangerous past. Chosen as a child, he was raised and trained as part of the off-the-books black box Orphan program, designed to create the perfect deniable intelligence assets—i.e., assassins. He was Orphan X. Evan broke with the program, using everything he learned to disappear.

Now someone is on his tail. Someone with similar skills and training. Someone who knows Orphan X. Someone who is getting closer and closer and will exploit Evan's weakness—his work as The Nowhere Man—to find him and eliminate him. Grabbing the reader from the very first page, Orphan X is a masterful thriller, the first in Gregg Hurwitz's electrifying new series featuring Evan Smoak.

Refreshments will be served. Books available for sale.

Gregg Hurwitz is the author of a number of critically acclaimed thrillers, includingThey're Watching, Trust No One, The Crime Writer and Troubleshooting.  His internationally bestselling novels have been finalists for several awards, including the Crime Writers of America Ian Fleming Steel Dagger and the ITW Best Novel of the Year awards. In addition to his novels, he has also written comic books and screenplays, developed television series for Warner Brothers and Lakeshore, and published scholarly articles on Shakespeare. He has taught fiction at the University of Southern California and guest lectured for UCLA and Harvard. Hurwitz grew up in the Bay Area and earned his B.A. from Harvard and a master's from Trinity College at Oxford. He lives in Los Angeles, California.