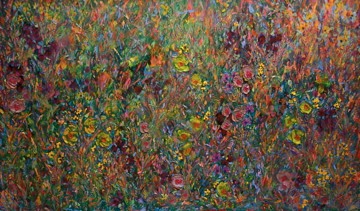 The first car accident occurred in November, before the painting was completed. The pain in my right arm was searing, but I cradled the right elbow in the palm of my left hand and moved my right arm up and down that way in order to finish the piece. The doctors at UCLA missed the diagnosis and my arm went essentially untreated for several years. The second accident occurred in January and caused significantly more damage. Again, the doctors let me down. I was however determined to complete the work. It would take years of rehab, but my painting was affected in many ways. As a result, it may appear to an expert that there were two different 'hands' at work. In effect there were.

Inscribed into the painting, ironically, are the words "honesty," "truth," "compassion," "integrity," and many others. The painting title, "Once Upon A Time," refers to the fact that so many of these are seemingly less prevalent in today's society. I later would realize how ironic the choice of the title of this painting would turn out to be, given its role. The lady bugs are supposed to signify good luck. Other quotes included in the painting are favorites from Harry Potter, which I was reading at the time.

Once Upon A Time was my first five figure sale, but this 'occasion' went by uncelebrated. I was forced to sell this work to pay thousands of dollars for surgery for Sim. At least, I thought he was having surgery. I had no idea that the doctor was committing fraud and taking my money. I had no idea what horribly unspeakable fate awaited my dearest Sim as a result of this doctor's scam. And so I let Once Upon A Time go in order to save Sim's life. 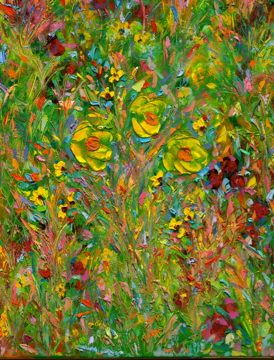 When Once Upon A Time was shown at the California Art Club's event at the Gene Autry Museum, the art experts didn't have much to critique. More than one called it a "contemporary masterpiece" and one said it was "one of a kind, most striking and unusual in its design." The only negative comment came from one expert who quietly admitted that he hated the color yellow. The other experts all laughed. Oh well! You can't please everyone!

This was my first foray back into the art world after a several year hiatus. I had lost all interest in painting after the events of November 2004. I was gingerly making my way back, or at least trying to. I had suffered terrible post-traumatic stress that November and after. There on the large screen, the intricacy and some of the many details were easily visualized. Others remained well camouflaged as I had planned and would continue to remain that way until someone took a magnifying glass and got up real close and actually studied every corner of the work. That made me smile to myself. And I heard audible gasps when it appeared on the screen. It was truly a masterpiece and every artist in the room could recognize that including myself - and I knew it would be commented upon years after I was long gone.

This was the first time I'd seen it - since selling it on November 1, 2004, the day of the alleged surgery. And sitting there in the auditorium, I was filled with many mixed and conflicting emotions. It was most beautiful and spectacular - and yet forever tied to the darkest day in my life. Memories flooded back. And tears welled up in my eyes. I turned and left the room and returned home.