Most of us, at one time or another, have heard horrific hate speech and have felt, "This should be illegal!" But should it? In her new book HATE: Why We Should Resist It With Free Speech, Not Censorship, Nadine Strossen, President of the ACLU from 1991 to 2008, argues that the strongest way to defeat hate speech is, paradoxically, to permit it. She also points out that any restriction of hate speech will inevitably also restrict artistic expression, especially comedy and satire. 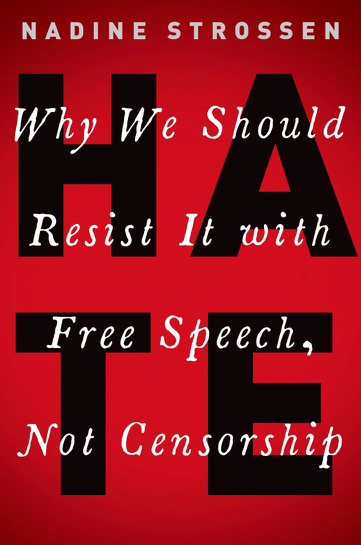 Attend this talk between Strossen and Penelope Andrews, outgoing Dean of the law school at the University of Capetown in South Africa, where hate speech is very illegal. Their conversation will be moderated by Harvardwood member Richard Loebl.

The event begins at 6:30 with a reception with wine and nice stuff to nibble; the discussion will start promptly at 7 pm. Nadine Strossen's book will be available for purchase, and a booksigning will follow the event.

1.0 hours of CLE credit (Areas of Professional Practice) for New York attorneys will be available to attendees through a sign-in sheet at the event.

Advance registration is REQUIRED—no tickets will be sold at the door. The cost is $5 for dues-paying Members of Harvardwood (and their guests); $15 for all others.

Nadine Strossen was President of the American Civil Liberties Union from 1991 to 2008.  Supreme Court Justices Antonin Scalia, Ruth Bader Ginsburg, and David Souter all participated in her ACLU farewell tribute.  She is the John Marshall Harlan II Professor of Law at New York Law School and continues to serve on the National Advisory Council of the ACLU.  She is a graduate of Harvard.

Penelope Andrews will join Nadine Strossen in this conversation.  Penelope Andrews grew up in South Africa under apartheid, and is now in her final year as Dean of the Faculty of Law at the University of Capetown in South Africa.  She is the President-elect of the Law and Society Association, and in January she will join the faculty of New York Law School.  She was formerly President and Professor of Law at Albany Law School.

Richard Loebl is a Senior Counsel at Seyfarth Shaw LLP and is a Fellow of the American College of Employee Benefits Counsel.

"Nadine Strossen is one of the great civil libertarians of our day.  This book provides a powerful and subtle defense of free speech" - Dr Cornel West

"This is an original, insightful, and compelling analysis, both timely and enduring, that has academic, constitutional, and international importance" - Robert Zimmer, President of the University of Chicago