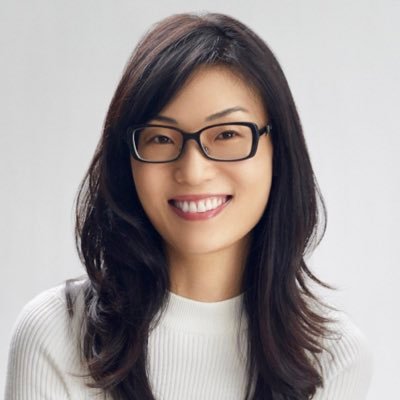 When Kelly Yang immigrated to the United States at the age of 6, she didn’t speak any English. She sat through classes and nodded along, desperately trying to understand. At the end of her first year in the U.S., Kelly decided that she was going to work hard and try to find her voice. It was then that she said her first sentence. By the end of her second year, she wrote a piece about her feelings on the plane from China to the States. She ended up winning a writing contest with this piece.

While there may have been grammatical and spelling errors in the piece, winning the contest taught her that she could be a storyteller without having all the perfected skills. “I had the authenticity of emotion, which is the most important thing,” Kelly explains.

Self-reflection and authenticity persist as key themes in Kelly’s storytelling. Her first book, the award-winning and best-selling FRONT DESK, which follows a ten-year-old immigrant girl who manages a motel, is inspired by her real-life experiences. At one point in her childhood, Kelly worked the front desk at the motel that her parents cleaned. She became more confident using her voice, partly out of necessity since she “had to pretend like [she] ran the place.” Through this experience, she encountered people from different walks of life and further developed as a storyteller.

Kelly graduated from U.C. Berkeley at 17 and enrolled at Harvard Law School with the intention of becoming a lawyer. After being sexually assaulted at HLS and the administration’s mishandling of her case, Kelly became disillusioned with law. Kelly moved to Hong Kong and sought to realign herself with what brought her joy. “The thing that gave me the most joy always, was writing,” Kelly states. “But, I wasn’t sure that I could do it.” So, she decided to follow her second love: teaching writing to whoever wanted to learn it. What started as a passion project blossomed into a business, The Kelly Yang Project, a leading writing and debate program for students in Asia.

While working as an educator to young children, Kelly served as a columnist for numerous publications including The New York Times and The Washington Post. Most of her pieces were about parenting, education, and immigration. Through these columns, she was able to find her bearing as a writer and master the art of writing succinctly, a skill she views as invaluable to her current career as a novelist. Kelly’s path to becoming a novelist arose from two seemingly disparate events: 1) the newspaper she was working for changed hands, subsequently laying off all of its columnists and 2) her oldest son got a really bad report card.

After getting fired from her job as a columnist, a role that Kelly took very seriously, Kelly felt that her only platform had been taken away. “Let me just stop, take the summer off, and see what happens,” Kelly decided. That same summer, her oldest child—who was 8—didn't receive a great report card and his father wanted him to stay back in Hong Kong and reflect on it. Thus, he wasn’t able to go to the States with his two younger siblings as he usually did during summer vacation. Kelly wanted to take the chance to tell her oldest about her childhood and all of the remarkable experiences that she had. She decided to write a chapter a day and began assembling the drafts to what later became FRONT DESK, which she released in 2018.

Kelly compares her writing process to dating. “It took many dates to get to know the story—to feel comfortable bearing my soul.” Writing about such personal experiences was difficult, but Kelly began to understand that writing was just a constant process of revision, and she gave herself permission to keep going.

As an Asian woman writing about nuanced topics such as poverty and race, Kelly faced a multitude of challenges to get FRONT DESK published. In fact, her first book was rejected by every single publisher except one. To the young writers who hope to tell stories grappling with topics of identity and find a place within the industry, Kelly offers these words of encouragement: “There are many examples of people who have broken through the gates and have shown that the world cares.” She adds, “We all have an obligation to portray our truth to the world as we see it. People are ready for these stories.”

Following the success of FRONT DESK, Kelly released its sequel, THREE KEYS in 2020, and the third installment of the series, ROOM TO DREAM, this past September. She also has a young adult novel entitled Parachutes that she released in May 2020, which has also received widespread critical acclaim.

Aissata Bah is a sophomore at Harvard College originally from Atlanta, GA. She is an aspiring television writer majoring in Women, Gender, and Sexuality Studies with a minor in Statistics. She hopes to create stories that specifically center and affirm women of color.