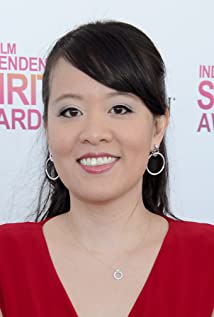 What do the films Swallow, The Tale, Children of Invention, The Invitation and the upcoming I Carry You with Me have in common? They are all independent films. They are all lauded by critics. And they are all produced by Mynette Louie AB ’97, who has already made an indelible mark on the world of independent cinema in a remarkably short amount of time.

But it was never certain that Mynette would end up in the world of film, a point we returned to numerous times throughout our conversation. Born to working-class parents who immigrated from China and Hong Kong, Mynette didn’t have the opportunity to form industry connections until years after she graduated college. That doesn’t mean she wasn’t interested, however. In her characteristically peppy and charming manner, Mynette informed me, “I’ve been consuming films like crazy since I was a little kid.” She also attended Hunter College High School, which has produced the likes of Lin-Manuel Miranda and Robert Lopez. “So I’d been around that world, but I never thought it was a practical path,” she told me. “And it still isn’t, it’s a very impractical path. So, I decided to just do well in school and go to Harvard.”

At Harvard, Mynette concentrated in East Asian Studies but focused on Chinese literature and film, never relinquishing cinema from her life. “Leo Ou-fan Lee was one of my professors,” she said, “and he introduced me to a lot of film theory and cultural theory and feminist theory… a lot of my papers [took] a socio-political view of films.” Mynette said that taking East Asian Studies and, more specifically, classes like Lee’s that dealt with fifth generation Chinese films, “was a great education in Chinese sensibilities… and indirectly influenced how I approach story and the kinds of notes that I give.” It also instilled her with a need to make films that, while not overtly political, have something to say about the world around her. When we discussed her filmography, Mynette explained, “I Carry You with Me is about these two gay undocumented immigrants living in New York… The Tale was about child sexual abuse and dealing with trauma… [and] Swallow was about a woman feeling stifled by the patriarchy.” She paused for a moment. “They aim to be entertaining, you know, first and foremost, and compelling… [but] there is something that I want to say with my movies.”

These films would come years after she graduated from Harvard. “After graduating from Harvard with debt,” she laughed, “I was like, gotta find a job to pay [it] off!” She wound up working in marketing at Time Magazine and later in business development at SportsIllustrated.com. “I didn’t love the jobs that I had right after college,” Mynette said, “But I thought it was a great general media business education that has served me well as a producer.” Our conversation was full of answers like these, because Mynette is someone who chooses not to focus on what a situation takes away from her, and instead on what she gained and how she can apply it to building herself and her career.

It was right after 9/11 that Mynette’s life took a dramatic turn. “A bunch of my colleagues [at SportsIllustrated.com] had been laid off and, you know, I was hoping to get laid off and get a severance package and that didn’t happen,” she told me, chuckling. “They [said], if you want to leave you have to quit.” I could almost hear her shrug over the phone. “So I actually did quit my job… and decided to figure out how to get into this film industry once and for all.”

Her decision was courageous, especially considering she still didn’t have any connections in the film industry. Her networking began when she answered an ad with a post.harvard.edu address. It belonged to a Harvard alumnus working on a PA-starved NYU graduate student film. Mynette worked as a PA on the short film for three days, her first hands-on foray into the film industry. She would go on to produce two more NYU graduate student films. “I feel like I got a free NYU film school education, just by producing these short films,” Mynette told me, laughing. “Then I moved on to co-producing my first feature, Mutual Appreciation.”

Four years after Mutual Appreciation, Mynette got her first self-described big break when she produced the film Children of Invention, an even more impressive feat considering she was still learning on the job. “As lead producer, I didn’t have a lawyer,” she explained. “Our film was so small, it had a $150,000 budget… I basically had to read a bunch of books on film law, and [make] a bunch of my own contracts, and it was a very DIY effort.” The film got into Sundance and, according to Mynette, “just blew the doors wide open… I was able to build my network from there and continue to produce feature films.”

If you return to the films at the beginning of this article, you may notice that, apart from being well-regarded and sharing Mynette as a producer, they are quite disparate in terms of genre and tone. When I asked her what films have impacted her the most, I got a better sense as to why. “I have very broad, very varied tastes. It’s funny, because in the film industry, you often get pigeonholed. When I made Mutual Appreciation, all I got sent were mumblecore films to produce. Then I made Children of Invention, and everybody just sent me Asian American films to produce. I was looking for a horror movie, I love horror movies… my initial films [were] all sorts of dramas and comedies and so nobody would ever send me horror films. And I finally made one, The Invitation, and then finally people started sending me horror films.”

To date, Mynette has produced 32 films and has been nominated for and won numerous awards. She won the 2013 Independent Spirit Piaget Producers Award, which honors emerging producers who, despite highly limited resources, demonstrate the creativity, tenacity and vision required to produce quality, independent films. Her most recent film, I Carry You with Me, won the Audience Award and the NEXT Innovator Award at Sundance. She has also been nominated for an Emmy Award and two Independent Spirit Awards. Through it all, she has dedicated herself to making the film industry more equitable. She currently sits on Film Independent’s Board of Directors, is a member of the executive and diversity committees in the Producers branch of the Academy of Motion Picture Arts and Sciences, and is an advisor to the Sundance Institute, SXSW, Tribeca and IFP.

Throughout her career, it has been through her connections with other producers that she has uplifted underrepresented voices. As president of the film fund Gamechanger Films, she financed nearly a dozen women who directed narrative feature films. In 2020, she founded The Population with Mollye Asher (producer, Nomadland) and Derek Nguyen (associate producer, The Tale), an indie production company focused on film and TV projects that center women, people of color, LGBTQ+ and other marginalized groups. “It was weird because we say that that is our mandate, but it’s always been our mandate,” she explained. “We’ve always supported films that were diverse and inclusive, just because it’s who we are.” The partnership has the added benefit of helping them produce more effectively. “The way the independent film industry is nowadays, you have to be juggling multiple projects just as a matter of survival, because you get paid so little on each project,” she sighed. “It just made sense to have partners I could lean on when I was occupied with one project.”

Mynette has accomplished a stunning amount during her career, and I was curious to know what she was proudest of. She took a moment to think about how to phrase her answer. “[This industry] does tend to attract a lot of people who already have resources… the people who get to make first-time features are people who come from money and have a wide network of high-net-worth-individuals,” she said. “I am proud of myself that I came from a working-class background with zero connections and was able to build this career.” Always humble, she hastily added, “I never feel like I’ve made it because as a filmmaker, film producer, film director, you always have to stay on the cusp of what’s new… every time I make a new movie that resonates [it] feels very rewarding because it’s like, okay, I still got it!” she laughed. “So, yeah, I guess I’m proud of myself for staying in it.”

Near the end of our conversation, I remembered a deceptively simple question that had been posed at a past Harvardwood event: “What is your definition of success?” When I asked Mynette, it only took her a brief moment to respond, her conviction evident in her tone: “My definition of success is living and working on your own terms and being able to survive while doing it.”

Mynette’s newest film, I Carry You with Me, is in theaters now.