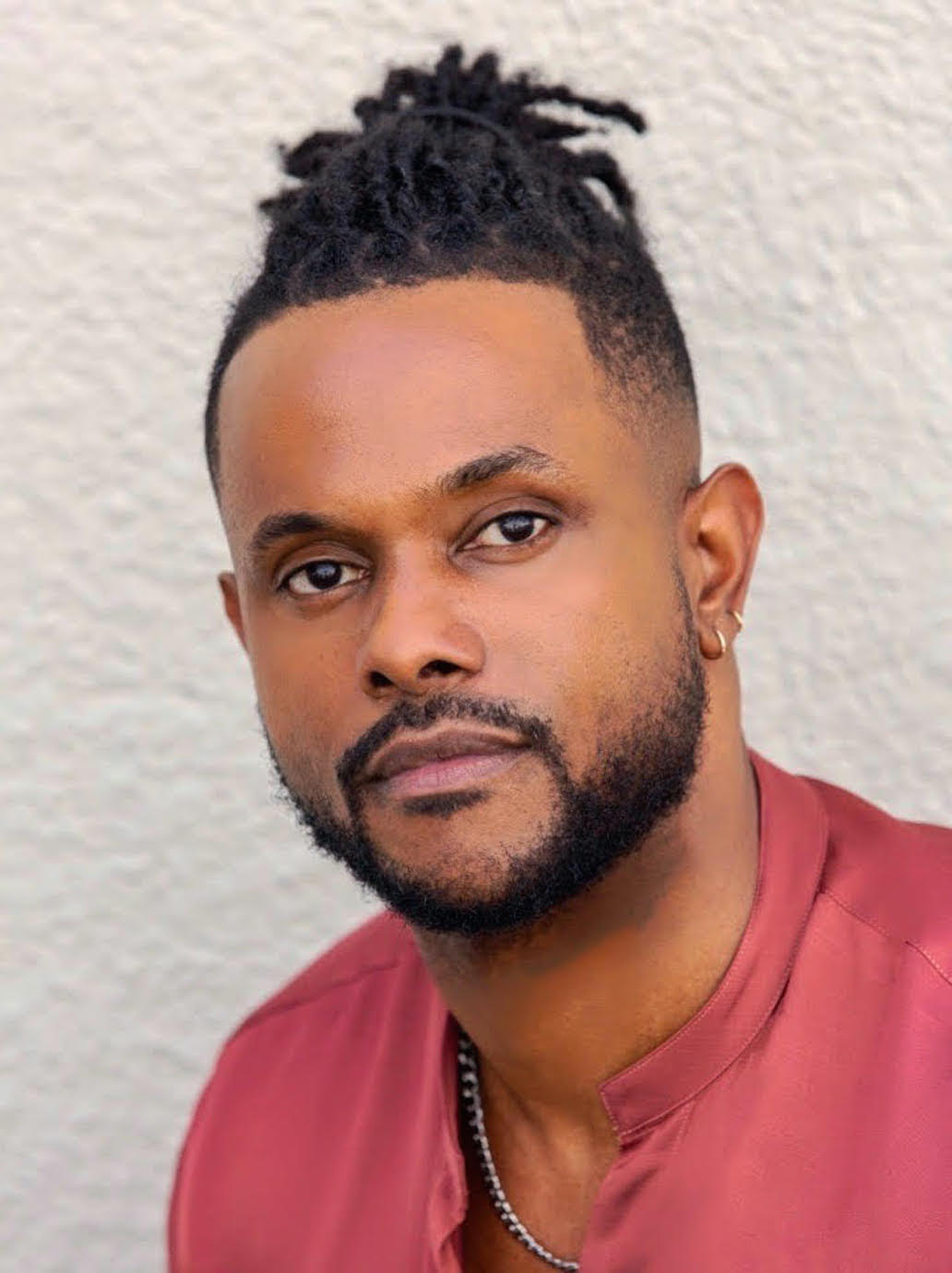 “Oh, I should re-read that,” Julian Breece AB ’03 whispers to himself as he scans his bookshelf and reads me his favorite titles, as if he were reminding himself to call an old friend to catch up. I’d asked him about his favorite books from college, and the final addition to the list is not a book, but an admission: “I could go on forever.”

His adoration is apt, because those books changed his life. Before he read them, he had a plan: he was going to be an academic. He would graduate from Harvard, get his masters, next his PhD, and then he’d become a professor. There were some questions of course (like whether he’d get a Rhodes Scholarship) but the general route was mapped. Then, he started the thesis writing process. “That was when I realized, ‘Oh, hell no. Academic writing is not for me,’” he remembers.

With the help of a few creative writing classes he’d taken, he started to realize that he didn’t want to just write about the authors he admired—he wanted to do what they did. He switched to writing a creative thesis, and esteemed novelist and essayist Jamaica Kincaid signed on as his advisor.

Breece followed the creative path out of Cambridge all the way to Hollywood. He’s now written for shows like The First, When They See Us, and First Wives Club. Currently, he’s writing a screenplay about Alvin Ailey, which Barry Jenkins is set to direct, and working on a TV show at ABC with Lee Daniels.

Becoming a creative was more of a homecoming than a pivot. Breece grew up acting in his hometown of Washington, DC. He describes himself as a theater kid, which, upon deeper questioning, is a humble depiction. He was an actual working actor who performed at The Kennedy Center and appeared on shows like Teen Summit. Ultimately, he quit acting (“I embraced the fact that I was an introvert”) but continued to chase what had drawn him to acting in the first place. “Acting was a way of communicating,” he says, “and I always had something to say.”

He started writing when he was young, and even his earliest stories made an impact. “I actually got in trouble in high school,” he laughs, “because I would write these salacious soapy stories about people in my school, and they got around to the administration.”

Even as he began to drift away from academia at Harvard, he didn’t immediately embrace the title of artist. He thought he might want to be a producer, someone who “facilitates art.” He enrolled at the Peter Stark Producing Program at USC after college. Yet, it was his degree in producing that led him away from production. The freedom to take creative classes along with business and marketing courses gave him a macro-view of the industry. While there, he wrote a screenplay called “Ball” that he submitted to competitions after graduation. In 2007, he was named a Finalist for the Academy of Motion Picture Arts & Sciences Nicholl Fellowship. That accolade got him a manager, who he is still with today.

In the years since, he’s written and directed powerful works that span genre, style, and medium. The connecting tissue of a Julian Breece piece is broader than any IMDB filter; he defines his body of work as “character, over everything.” He’s dedicated to creating fully realized human beings on the page.

His latest character is famed choreographer Alvin Ailey. Breece is writing a screenplay about his life to be directed by Oscar winner Barry Jenkins, who wrote and directed both Moonlight and If Beale Street Could Talk. While it sounds like a dream job, he had originally told his agent he wasn’t sure that he wanted to do another biopic. But he took the meeting with Jenkins for a personal reason—his mother was a dancer in the Ailey Company.

“As a creative kid, my Mom was my idol,” Breece says, remembering what it was like to hear the stories of her dance career. She quit earlier than she wanted to because she felt pressure to go to college, to get married, to have a steady job. “I feel like there is a degree to which she left dance for us. For my brother and I, for my Dad, for our family—even though we came about way after,” Breece says.

Now, he’s had the chance to thank her for that sacrifice. He took her to New York to visit the Ailey studios, where she ran into people she knew from when she was young. His creative career is growing in the space of the one she left behind.

He’s also been grateful for the chance to work with Jenkins and calls him a fantastic “creative partner” multiple times. The phrase is telling. “I’ve worked with a lot of people who want me to execute their vision, but I’ve never been given this degree of freedom,” he says. “He is really trusting me with this story, which is a real honor.”

After years of pouring himself into his scripts, Breece has earned that trust. The energy he has spent thinking about the development of these fictional characters has reverberated off the page and into his life. In his twenties, he worked on multiple projects where he did not even realize how much of himself he was putting into his characters. “I was working out things with my own identity, and I didn’t know it at the time,” he says. “Those projects became an outlet for me and really saved me in certain ways.”

His characters helped him grow, and now he’s returning the favor. “As someone who in his own life is constantly evolving and moving towards becoming the person I was meant to be, it’s a rewarding exercise to be able to do that for characters on the page,” he says. But his characters’ growth is ultimately limited by their humanity. Like all writers, he often gets the question, “How does your character change at the end?” Breece answers it differently. “For me, it’s less of a broad change, and more of an inch,” he says. “Moving them an inch is everything. Because people, on some level, are who they are—unless they do really deep work to change things.”

As we talk about the concept of “moving an inch,” I ask if there is a most meaningful inch that he’s moved. “Everyone has an idea of what you can be for them,” he starts, choosing his words carefully. “I’ve learned to put myself and the things I’m here to do ahead of what the industry wants from me. It’s easy to lose track of what you set out to do. I want my vision to come across. I would let anything go if I feel it is not going to be what I want it to be.”

The ability to “let go” is something he’s been working on for years. He first got that advice at Harvard, but it’s not something he learned in a packed lecture hall or from a book buried deep in the stacks. Instead, the lesson came over a pitcher of sangria at a restaurant in Cambridge. Professor Jamaica Kincaid took her creative writing class out to dinner, and at the end of a boisterous night someone asked what advice she would offer to aspiring writers. They expected professorial platitudes. “Just hop on a plane and go to Paris,” she surprised them. “Don’t think about the world that you left behind. Make love to a beautiful woman. Or a beautiful man.” At the time, Breece was twenty years old, and his takeaway was simple: “I thought, ‘I don’t know what the fuck that means. I can’t just do that!’”

But after years of reflecting on that sangria-fueled counsel, he’s come to appreciate how it fits into his own life. “Going, and living, and letting go,” he pauses between each verb. “Letting go of Hollywood is a big thing that I tell younger people. This is not the world. The earlier you realize that, the happier you’ll be in your career here.”

He wishes he had learned that lesson earlier but acknowledges that everyone has to go through their own journey to absorb advice that bold. “Those are the moments, whatever you want to call it, like God’s whisper, when somehow you have to separate yourself from the world as you see it in order to see the path toward the light that is really yours to have,” he says.

I end our interview by posing the same cliché question that his classmate had asked Jamaica Kincaid over dinner. What advice would you give to an aspiring writer? He starts with traditional advice (he calls it “corny”), to read the screenplays of your favorite movies start to finish, and also to read the book Save the Cat! The Last Book on Screenwriting You’ll Ever Need in order to learn traditional three-act structure. Not in order to stick to it, he clarifies, but to help inform how you can experiment and play with that structure.

Then, he pivots into the Kincaid territory of powerful guidance. No sangria needed. “Learn the industry, but break the rules. Do not honor and worship it. Break the rules as soon as possible,” he says. “Those are the people out here that people clamor to work with. The people who make us see things differently, make us see things purposefully, make us see what’s possible—who step outside the lines and write outside the lines.”