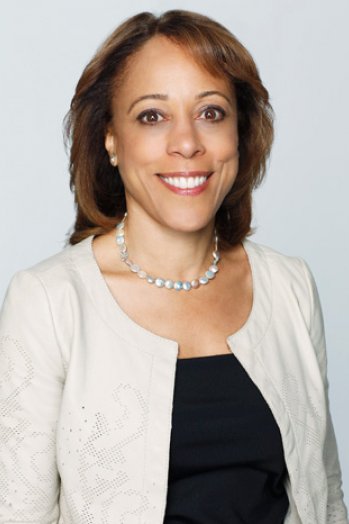 Goode is a team player. Even when I asked about her proudest career moment, she expressed gratitude for the longevity of her career rather than narrowing in on a specific achievement of her own.

“I feel grateful that I’ve been able to have a career that has stretched across many years,” she says. “It is a bit of a marathon.”

The marathon started when she decided to move east for college. When she reflects on her time at Harvard, it’s the small moments that stand out most.

“I just have really nice memories of sitting out in the courtyard or studying in the library,” she told me, eating in the Lowell dining hall, and maybe sitting with people you don’t know so well.” Those moments added up to something significant: “[Harvard] opened my eyes to different kinds of possibilities for where you could go in your life.”

After graduation, she was still struggling to narrow down those possibilities. Goode applied to law school, while also looking for jobs in both journalism and entertainment. Eventually, she landed at Columbia Pictures TV with a paid internship. There, she learned about lesser-known jobs in the TV industry.

“A regular person may be more familiar with working as a writer or a director, but not that there are executives who work in both development or in current programming television,” she explains. “That internship was my introduction… and there was kind of this big ‘ah-ha’ moment for me.” She loved the idea of working on content, all while “helping other people, by helping to support their vision.”

Goode went on to work at CBS, but after a year, feared she might be back to square one. The team that hired her was replaced, and she didn’t know if she would still have a job under the new leadership. The new boss told her they could work together for a couple of months and “see how things go.”

After just a week, he hired her full-time. “That was, in hindsight, one of the most generous things that somebody did,” she says. “They took a chance on me.” Goode deemed it an act of generosity, but I wondered how her old boss saw it; he might tell the same story as an example of how she proved herself quickly.

She stayed at CBS for nine years, before continuing on to jobs at Lifetime, The Game Show Network, ABC Family, and, now, Warner Bros. In her role, she works on nine current shows: Westworld, Shrill, Batwoman, The Kominsky Method, Bob Hearts Abishola, Stargirl, Titans, The Flash, and B Positive.

The shows span genres, shooting styles, and even fictional universes. But for Goode, there is a common thread: “Whether you’re working on something that has hardcore action, comedy, or drama, everything still comes down to the character dynamics. What are the emotional stakes for these characters? What are you invested in? What do you care about? What are you worried about for them?” She continues, “Everything else around that is the bells and whistles.”

The job comes with an unexpected side effect—superhero fandom. Warner Bros. owns DC comics, and four out of the nine shows Goode currently works on involve caped crusaders. “I couldn’t ever claim to call myself a superhero geek” she jokes. “I am still a beginner compared to the people who live and breathe it. But I am a very happy fan of DC.”

When I asked if she had a favorite character or superhero, she took a minute to think, then laughed about the fact that she just couldn’t narrow it down. But when I asked who her real-life superheroes are, Goode had an answer right away: the civil rights icon Congressman John Lewis, who passed away in July. Goode pointed out that he might have been a superhero fan himself, as he had attended Comic Con—where he cosplayed as his 25 year-old-self crossing the Edmund Pettus Bridge in Selma.

Lewis spent his life teaching people “to make some noise by speaking up and speaking out,” a lesson Goode understands firsthand. “There were definitely many times when I was the only Black person or person of color in the room,” she notes, as she reflects on her decades working in the television industry. “You felt like you had an obligation to speak up when there was content or material that wasn’t ringing true.”

The entertainment industry has a long way to go when it comes to diversity and inclusion, but Goode is hopeful about the future. She’s grateful that the conversations are being had and believes the most recent push for diversity in Hollywood is building on the progress of the last few years.

“It’s nice to see lots of other faces coming up through the ranks and to see directors, writers, and showrunners in far different numbers,” Goode says, "although we are not there yet.”