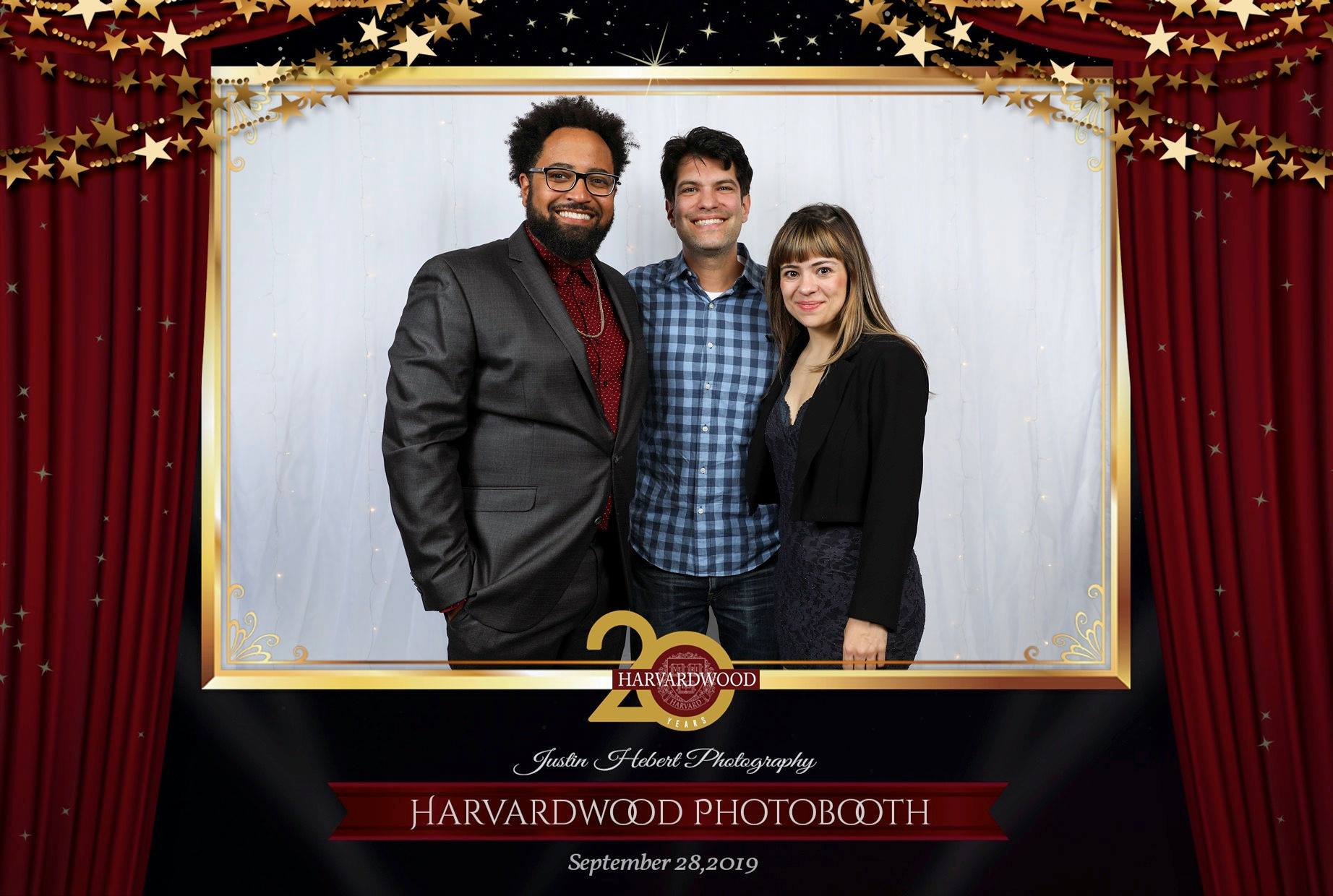 At Harvardwood's 20th Anniversary Celebration earlier this year, we were fortunate to be joined by Diallo Riddle AB '97, Dan Mintz AB '02, and Alison Rich AB '09, all of whom gave HILARIOUS comedic performances. Alison has kindly shared the (excerpted) text from her performance as a humor piece. Enjoy!

Harvard is not the place you’re supposed to go if you want a career in the arts. It’s Yale or NYU or no-school-at-all and just get an Instagram, be hot, and make 15-second videos of you Bird-scootering over watermelons at the Library of Congress. There you go: instant stardom.

But thankfully, there’s Harvardwood—this awesome resource that fills in the gaps in our Harvard education as to how to traverse a field that can often feel like playing a game of Jenga inside a washing machine possessed by Satan. 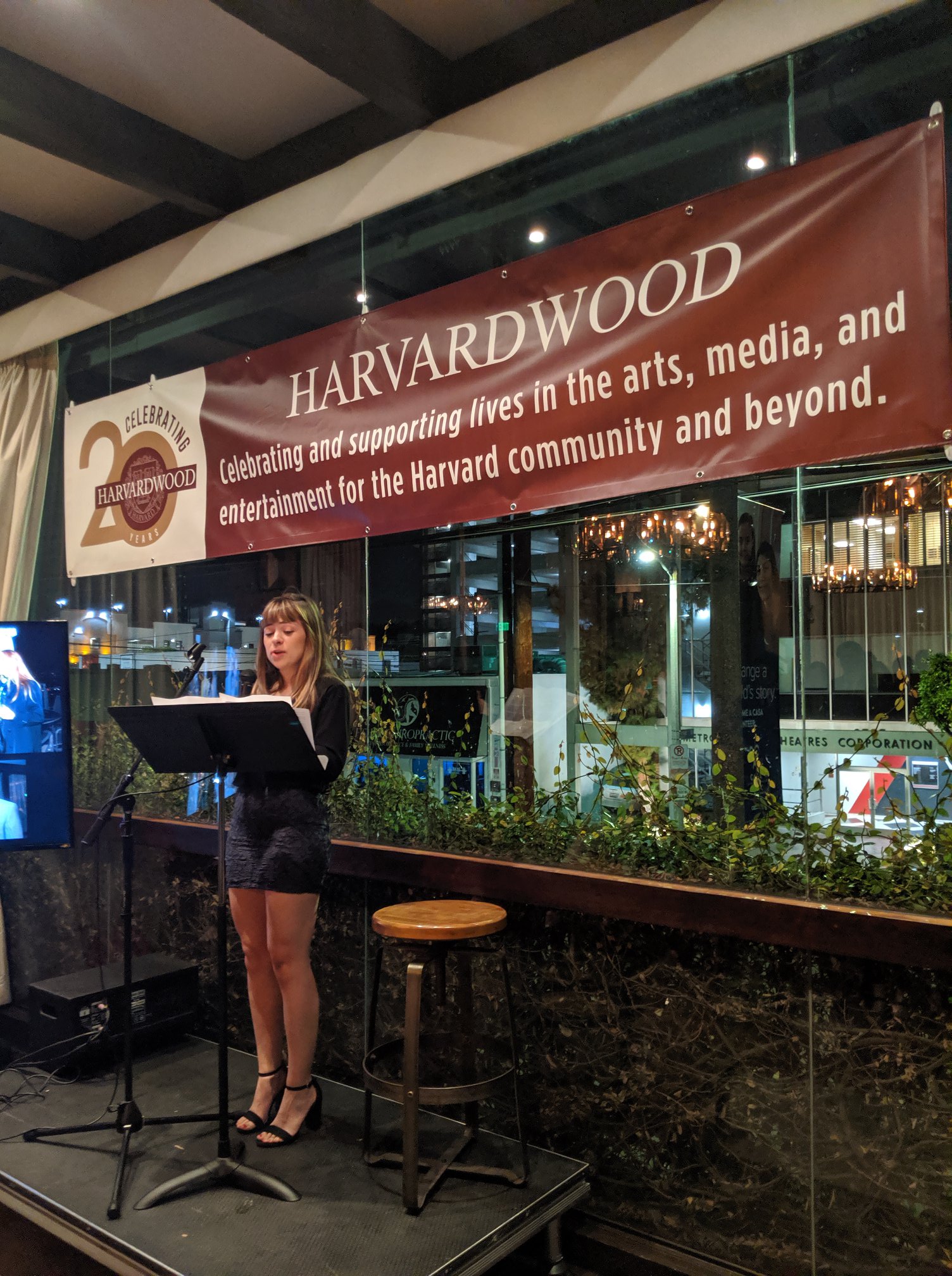 So I thought I’d use my time to suggest some additional courses Harvardwood could offer to help alums better navigate Hollywood.

This first class is an introductory entertainment business course called How to Get a Tutoring Job to Pay for Your Improv Classes. So you’ve decided to pursue a career as a writer, actor, director, or general Hollywood pervert, but right now, your most marketable skill is that you can help the children of rich people get stellar SAT scores, so they too can get into Harvard and not use that education toward a job that relates to their actual skill set. The cycle continues. This course will cover such topics as dealing with entitled parents, pretending you remember what fancy vocab words like “adumbrate” mean, and writing just enough of a kid’s admissions essay so that the parents don’t end up like Aunt Becky.

Next we have an introductory acting course. It’s called Acting Like You Have Professional Acting Experience When You Absolutely Don’t. Everyone has to start somewhere, and if you’re a recent Harvard grad, you’re starting out with some HRDC credits and a few On Harvard Time YouTube videos that will not age well. But with a little embellishing, those HRDC shows can be reframed as regional theater gigs at the prestigious American Repertory Theater. And those video sketches can be dressed up as indie film festival applicants! Because after all, isn’t acting really just lying?

This next course is an intermediate writing course. It’s called How to Be in a Writer’s Room When Your Personality is Bad—so you did it! You got your first legit industry job as a writer on a TV show. But the problem is if you’re a Harvard alum, your personality is bad. So this course will equip you with everything you need to hide how uncharismatic and socially inept you are. It covers such valuable personality hiding tactics as not talking, not correcting the grammar of the stand-up comedians in the room pitching actual jokes, not going up to the showrunner on day 2 and pitching your own edgy political time travel dramedy, and more not talking.

Next, we have an intermediate acting class. It’s called Acting Like You’re Happy For That Econ Major Who Was on Your Floor in Quincy House But Is Now Somehow Starring in an HBO Show. You didn’t even know he liked acting. You took every useless Harvard drama class and can’t manage to book a nonunion Wells Fargo commercial, but this guy did five years of i-banking and suddenly he’s at the Emmys? In this course, you’ll learn how to email that guy and say “you’re such a fan” and would “love to grab coffee sometime” because maybe he’ll introduce you to his agent or agree to be in the pilot presentation of your edgy political time travel dramedy.

Now we have another entertainment business course called Personal Branding. Hey, remember that On Harvard Time sketch you were in where you used that questionable accent? Or how about the time you did Primal Scream, but you didn’t realize how out of shape you were, so you didn’t so much run as limp around the yard, slowly enough for Harvard square locals to take pictures? This course is all about how to torch your shameful internet history, so that when you do finally sell that edgy political time travel dramedy to TBS, those unfortunate pictures and videos don’t resurface.

Lastly I’d like to suggest a directing course. It’s called Directing Your Family’s Attention To All The Harvard Alums Who are Doing Worse Than You. When your parents sent you to Harvard they thought, “Wow. We don’t have to worry about that kid now. They’re set.” But then you decided to go into entertainment, instead of literally any other field. In this course, we learn tips on how to direct your family’s attention to the Harvard student who murder-suicided her and her roommate in Dunster House in the 90s. You could be that woman. But you’re not. In fact, you’re not only not a murder-suicider, you’re well on your way to becoming a Hollywood bigwig because you just joined a Harvardwood writers group and you’ve found a community of driven artists to lean on, so get off my back, Mom and Dad!

But in all seriousness, it’s very special to have a community like Harvardwood. Congrats to twenty years. Here’s to many more!

Alison Rich is an actor, writer, and director. She currently acts and writes on ABC's The Goldbergs. Other acting credits include Drunk History, Angie Tribeca, The Lonely Island's Popstar, 2 Broke Girls, Life in Pieces, Other People, @Midnight, Comedy Bang! Bang! and more. She was a series regular on The Lonely Island's Fox sketch show Party Over Here and Hulu's Resident Advisors. She's written for Saturday Night Live, The MTV Movie Awards, Billy on the Street and various projects for Fox and Comedy Central. Alison recently wrote and directed a digital series called The MacMillan Genius Grant. Before that she wrote, produced, and starred in a late night pilot for TBS and won a development deal with IFC at The New York Television Festival. She's directed multiple stage shows at UCB including Ego Nwodim's "Great Black Women and Then There's Me". Most recently she directed Alana Johnston’s Self Esteem Party at the Lyric Hyperion. Alison appeared as a New Face for the Montreal Just for Laughs Festival. These days, you can catch her every Tuesday at 7 PM at UCB Franklin performing improv with her group Tuesday Club.