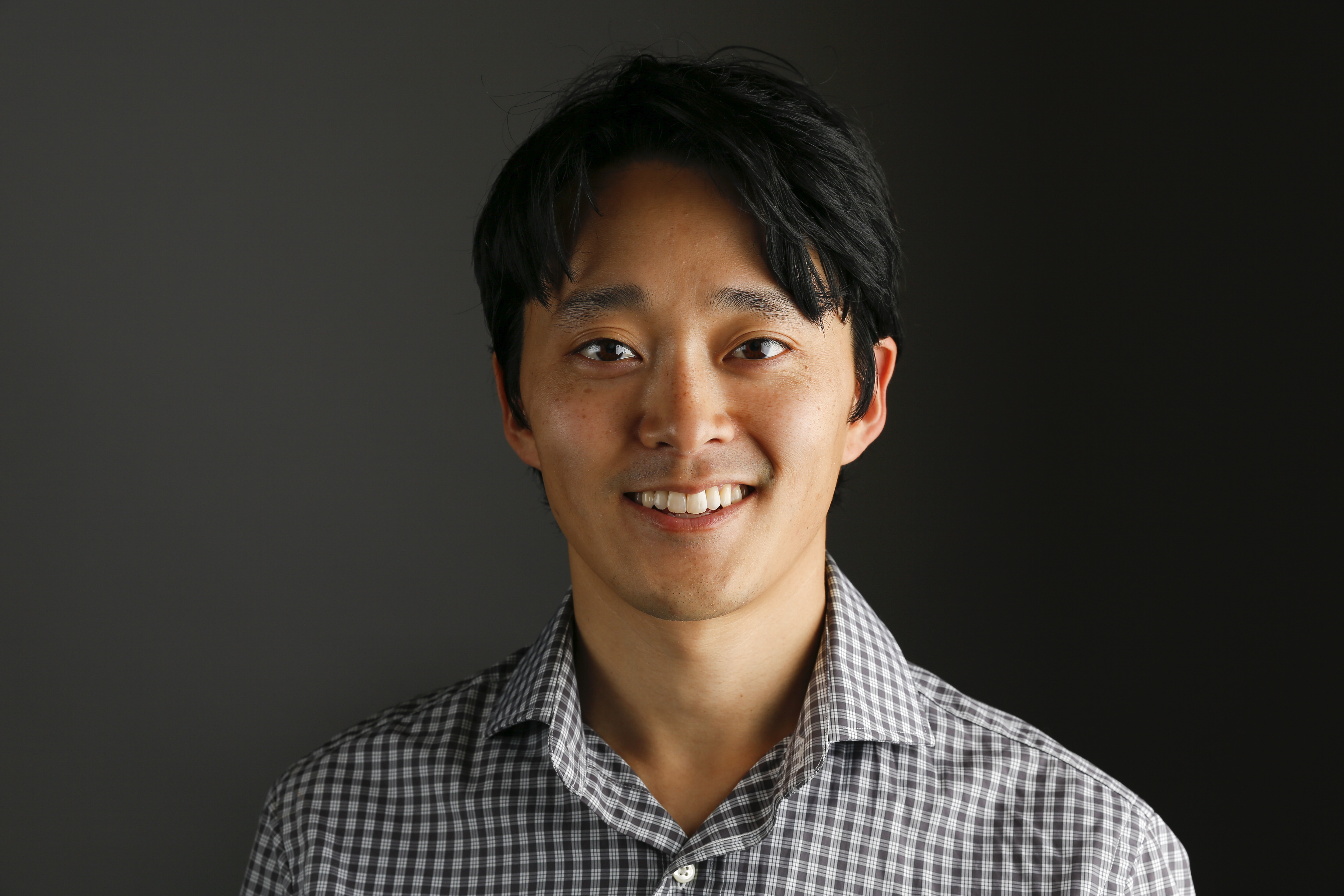 For some, the path to a Hollywood career is circuitous—full of left turns, doubt, and reconsiderations. Not so for Daniel Chun AB '02, a TV writer and producer who has worked for some of Hollywood’s most beloved comedies, including The Simpsons and The Office. For Chun, comedy writing has always been the game (with a degree in biological anthropology on the side).

Chun, who is Korean-American, grew up in a small town in Northeastern Pennsylvania not far from The Office’s fictional home of Scranton. He first realized his interest in creative writing around seventh or eighth grade. As a teenager, he and his school friends were “pretty obsessed with comedy”—Saturday Night Live, The Kids in the Hall—"so we would write and shoot stupid little sketches late at night in my basement.”

He arrived at Harvard in the fall of 1998 with a keen interest in comedy and, naturally, a Hollywood-infused idea of a future career.

"I had sort of imagined myself as a teacher, in the Dead Poets Society vein, like a teacher who has like 5,000 of his former students show up at his funeral. I really had no idea what I wanted to do," Chun says.

But he did know that he wanted to write comedy in school; having read the Lampoon before matriculating, it was “a mini dream of mine" to get on staff.

He joined the Lampoon at the end of his freshman year and it “basically took over my life,” he recalls. “I found my friends there. Writing and being a part of that community was basically my focus at school."

That, and a side interest in biological anthropology. Chun explains the logic behind that potential curveball as, “How can I do this more and read obscure colonial literature less?”

"Once I knew that I wanted to be a writer," Chun continues, "I realized that the kind of writing I wanted to do did not require any specific type of degree or training. So I switched purely because I knew it didn't matter what I studied”—and he found the material interesting.

The switch happened around the time that Chun realized, after watching friends go through the Lampoon-to-LA pipeline, that comedy writing could be a viable career.

“I started quietly researching [moving to LA] for myself and it felt very viable at the time, especially having the privilege of coming from the Lampoon, which I knew was something I shouldn't take for granted,” he notes. By the end of his senior year, he had assembled a plan: crash on his friend’s couch, send spec scripts to that friend's manager, and find representation as soon as possible.

One of the Lampoon perks he didn’t take for granted: being able to call up Bob Saget after graduation. During his junior year of college, Chun and a friend wrote jokes for a variety show at Sanders Theatre hosted by another friend, actor B.J. Novak AB ‘01. Novak had managed to recruit Saget to perform, and Sagat was impressed by the young comedians’ work.

So when Chun graduated a year later, he “called up B.J. and Bob and said, ‘Hey, I'm moving out,’ and they put me in contact with some people, so I was really able to hit the ground running in LA.”

At first, he worked on a talk show pilot that “paid almost nothing but, to me, it meant that I was a professional writer.” Chun’s goal at the time was straightforward, but seemingly elusive: write a good spec script that he was proud of, and land an agent. By the end of 2002, half a year after graduation, he had succeeded on both counts.

"It was all incredibly quick; I'm incredibly lucky,” Chun comments, as he reflects on how swiftly he ticked through his to-do list. “It never happens as quickly as that. I mean, it felt like forever [at the time] just because I was young and unemployed and terrified, but I realize in hindsight how lucky I am that it came together quickly."

At the time, Chun was scheduling meetings based on the strength of a spec script he had written for Scrubs. But ultimately, it was a script for Will & Grace that won over the showrunner for the The Simpsons. Chun was hired as a writer in early 2003 and worked for the show for six years, eventually becoming a co-executive producer.

"I had no idea at the time how lucky I was to be learning around such talented people—that staff, top to bottom, was full of incredibly funny, smart people,” he says of those years on his first full-time writing job.  “The thing that I really took away from [The Simpsons] that really helped my writing was the ability to just write jokes on demand and expand your imagination to come up with creative, surprising jokes. Really, 80% of the job at The Simpsons is writing jokes."

Chun adds that The Simpsons is unique for the stability it provides employees—people can marry and raise kids for years, all while working for the show. “But when I was 22 years old,” he admits, that stability “just wasn't important to me.”

After six years on The Simpsons, Chun was looking for a new comedy challenge. It was still pre-Twitter days, and he was posting frequent jokes on MySpace, which got the attention of writers at NBC’s The Office, who approached him about working on the show.

"I wanted to prove to myself and to other people that I wasn't just a Simpsons writer," reveals Chun. "I was capable of doing other things."

He joined The Office in 2009 for the show’s sixth season, eventually becoming head writer and a co-executive producer before departing after the eighth season, in 2012. One of the biggest challenges of moving to The Office was adapting his comedy to smaller, more quotidian situations. At The Simpsons, Chun explains, “We'd take Homer to a monster truck rally. And in The Office, the whole episode would be about the thermostat. That was one of the hardest things for me to learn when I got there: how to re-calibrate the scope of the comedy I was writing to make it feel much more grounded and less fantastical."

At first, his Simpsons-honed joke-pitching transferred well to the short “talking heads” portions of the episodes, where characters directly address mockumentary cameras. “That’s where I felt like I was earning my keep,” Chun says, “and then I learned.”

He is quick to credit the show’s success to its “once-in-a-lifetime” cast and incredible writing team, who could make dialogue about a thermostat seem so spontaneous as to be improvised.

“Just the amount of execution and craft behind what feels like almost an improvised, effortless thing was really impressive to me—that was another humbling thing when I entered the show, knowing that I had to meet that level,” Chun says.

There was still room to grow after several years writing jokes for such favorite characters as Creed, Michael Scott, and the ever-challenging Dwight Schrute.

"The one thing that I felt like I had never done was develop,” Chun notes. He had been in many discussions for overall development deals with various networks, and in February 2012, he signed with ABC for a two-year overall deal. “I don't feel like I need to prove myself as a writer to them,” Chun says of the deal. “It's really just a question of us working together to figure out a show that we're all happy with. So when I had the opportunity to do an overall deal, I felt that was very difficult to pass up."

The highly-sought individual deal came about through "a combination of people having read my stuff before and having met me before, and also my agents doing the legwork of making the calls and setting up the meetings to figure out if there was any interest in my development,” Chun says. “Just the straightforward, old-school way of making it happen."

The deal built in production credits for other ABC series; Chun has served as consulting producer on Happy Endings and Trophy Wife, a co-executive producer on Hello Ladies, and co-writer and executive producer of the Jermaine Fowler pilot Delores & Jermaine. He developed the show Grandfathered, about a bachelor who discovers he’s both a dad and a grandfather, for John Stamos.

But the TV work Chun is most proud of is what he’s working on right now as executive producer: Speechless. "I'm very proud of it on a pure writing level and a comedy level... but it's also a show that's about a family whose oldest child has cerebral palsy, is nonverbal, and uses a wheelchair.

“It's a show that just wasn't on the air, and a perspective that wasn't being explored on TV, and I'm very proud of the fact that I think we've not only told the story and we're doing it in a way that we're happy with, as comedy writers, but also the disability community has been very supportive of, in terms of the types of stories we're telling and telling them in a way that isn't cloying or condescending.”

The work is part of a shift in Chun’s career toward “feeling like I can be more of a driver of the conversation.”

“When I first moved out here,” he explains, “I thought, ‘Just hire me and I'll run through walls for you.'” Now, “I’m really grateful that I'm in a position in my career where I get to walk into rooms now and say, ‘Here's what I think we should be doing. Here are the types of stories I think we should be telling.’”

The industry has a long way to go, but Chun is inspired by the different perspectives now making it to screen. “It's an exciting time for me as someone who is a person of color."

One thing that hasn’t changed? Chun says he’s never going to be the person who can just write freely and come back to improve it later. “My natural process is much more: read Twitter for two hours, write for 5 minutes. Go down a YouTube wormhole for an hour and then write for ten minutes. For me, every line is like trying to pull a tooth out. And that's such a psychologically brutal process that I need to take frequent breaks.”

However, "the trick to working successfully as a TV writer is that you really do have to show up at 10 o'clock, or 9 o'clock in the morning, and you have to sit down and start writing and be helpful and creative on demand.” Thus, Chun recommends, especially for people with a natural tendency for multi-tasking and breaks, “an experience where you have to get things done” quickly.

His other advice for aspiring writers is fairly straightforward: find a way to get feedback on your script that's not from your friends or family.

“Everyone who wants to be a writer writes a script and every single one of them thinks the script is great because they're only showing it to people who are going to say good things,” Chun points out. He also recommends doing the hard, introspective work of “really understanding that the best writing comes from some personal place, whether it's your own story or personal observation.”

He encourages setting a high bar for oneself, rather than settling for merely better than the thing you saw on TV that was just barely passable.

“Until you've been on the hiring side, you have no idea how many scripts are out there and how many similarities there are between them all, and how quickly people can read a script and say, ‘Ok, this person does not seem to have anything special that's worth paying them as much as we pay professional writers,’” Chun says. "You have to stand out, and the way to do that is trying to be special and not just trying to fit in with the rest of what's on TV."