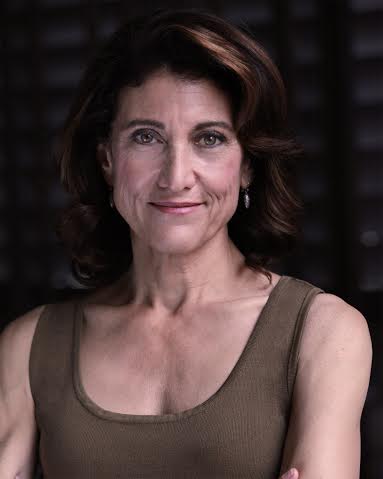 Amy Aquino’s love for acting began in junior high and high school. When it came time to choose a career path, she was passionate about acting, but feared it was no way to make a living. Amy also loved science and medicine, having interned in the emergency room growing up in Philadelphia, and decided that might be a more practical career path. With this pragmatism, she chose to attend Harvard, although it did not have a theater department and offered only one theater class. But her love for acting was ever present.

As she recalls, “Actually, the essay that I wrote for my [Harvard] application was all about acting and what it meant to me.”

As an undergraduate, Amy concentrated in biology, but immediately immersed herself in Harvard’s theater scene. She enrolled in the one theater class at the time, the freshman acting seminar, and performed in numerous house theater productions throughout her time there. Ultimately, she realized where her priorities were: “By my junior year, I had noticed that I was spending, oh, 40 hours a week doing theater in a school with no theater program. And hardly any hours at all, you know, the absolute minimum on my biology. So I had determined at that point that I needed to at least give acting a try. So [I] moved to New York from there.”

Living in New York, she had great difficulty finding work as an actor for several years. She recalls, “I was getting practically nothing. I got one job in a theater company. We did Two Gentlemen of Verona and I was hired as one of the woods people to play my bassoon and run around in a leotard. And I was appreciative of that. Riverside Shakespeare Company, I don't know if they're still around, but that was basically it.”

From an objective standpoint, she was doing all the right things. She found a flexible nighttime job working as a paralegal, and was taking numerous classes at studios throughout the city, ranging from acting classes at the Uta Hagen Herbert Bergoff studio to singing and dance classes. But it was not enough.

Ultimately, Amy determined that the people who were getting acting jobs were those who had attended drama schools like Julliard and Yale, so she began applying. However, her initial attempts were not successful. She recalls, “I started applying to Yale Drama School and Juilliard once. I applied to Yale three years in a row before they finally admitted me. And by the time they did admit me, I had been working professionally in Minneapolis. I had moved from New York to Minneapolis, I went out there because I had heard that their unemployment rate for actors there at any given time was 50 percent versus the 95 in New York, and it actually worked. They were incredibly inviting and open and cast me in a show right away, and I got a commercial agent and was ready to move there when Yale finally admitted me, which is the way it happens.”

Amy capitalized on every minute of her time at Yale and remembers those years very fondly. She states, “It was really difficult and really wonderful and a very supportive class. It taught me a tremendous amount.” One thing she did find frustrating, however, was her classification as a character actor during her time at Yale for small, funny roles. In part to try and break out of this characterization, she took a risk on her final audition, where students perform for industry members.

Amy recalls, “For the big audition at the end, I took kind of a big chance and did a very irreverent interpretation of Agnes of God, which is a play about a nun who gives birth to a baby and they’re trying to figure out how it happened. It got an enormous reaction, which you typically don't get any reaction at all at these big league auditions. They literally sit silently. They don't laugh, they don't clap. They're just looking. And they went nuts for me and Kimberly and everything reversed. My fortunes just reversed. So that ended up really kicking off my career.”

Immediately after graduating, Amy was hired to do a play in La Jolla. Soon after, her first professional television job came through a Harvard contact, Andy Borowitz AB '80, whom she had worked with during her theater days at Harvard. She was cast as an Italian maid on the show Easy Street, and she jokes, “So that was my introduction to the American public, singing opera in French and acting in an Italian accent.”

In the years that followed, Amy was somewhat bicoastal. She lived and did theater in New York, continuing to work nights at her old law firm, and would travel to Los Angeles for pilot season where she would book work occasionally in television as well. Then, somewhere between her third and fifth pilot seasons, Amy received her big break when she was cast as Phyllis Berger Silver in the show Brooklyn Bridge. This brought her out to Los Angeles full-time, where she bought her home in Hollywood that she still lives in today, and met her husband.

Twenty-five years later, Amy has remained in Los Angeles and her career path has followed a similar trajectory. She continues to alternate between her work in theater and her work in television. Her resume is as impressive as it is diverse, and she has had the opportunity to work on many iconic shows over the years.

She describes her experiences fondly. “I had a really wonderful run at one point where I was doing what I call repertory television. I was doing recurring roles on four different, all wonderful shows that were beautifully written. And it was really great. I was doing Felicity, which was this crazy character. And then I was doing Judging Amy with the fabulous Amy Brenneman AB '86, where I was playing a judge who also was dealing with cancer, so that was a very different character. I did Freaks and Geeks, with the unbelievably talented Judd Apatow and the extraordinary cast there and Paul Feig, and that was a very different feel and type of storytelling. And I was doing ER, [with] the unbelievable John Wells with the original cast.

"And I did ER for 15 years on and off from the beginning to the end and got to work with extraordinary people there. She was the toughest of all my tough characters. And switching back and forth between them gave me tremendous pleasure and always kept me in the game and kept me interested. So it was always challenging and interesting and what acting is about—creating people and telling stories—and I got to create all these different people and switch around with them. I feel very blessed to have been able to do that.”

And blessed she has been because just finding work as an actor is no cake walk. Her story is a testament to that. A strong work ethic and solid training are essential, and Amy is a strong believer in the value that drama school can provide for actors. A degree from a reputable school provides solid training, confidence (in your own abilities as well as industry members’ confidence in you) and relationships, each of which can significantly aid an actor’s career.

Yet ultimately, Amy believes it is essential that aspiring actors understand the arbitrary nature of Hollywood. She explains, “If you remember one thing, it's that the business is arbitrary. You can be a brilliant actor and get nowhere and you can be a really sucky actor but have that indefinable thing and end up having a very lucrative, successful career, so you just can't take anything personally. It doesn't mean you don't try, but you [have to] just remember that the odds are that the industry's not going to respect you or it's not going to work out and that's okay. It's not a reflection on you as a person. You can't let a business that's this arbitrary define you as an individual. I never let it diminish my self-esteem. And what happens is some people just keep pushing it and pushing it, and after a while they don't feel good about themselves. And if you don't feel good about yourself, you can pretty much forget it because you bring that into the room and no one's [going to] want to hire you. And you have one life and you can do any number of things. Don't let your life go by just because this ridiculously arbitrary business isn't going to give you the things you want. Find something that will.”

Currently, Amy is keeping her streak of playing strong female characters alive with her role as Lieutenant Grace Billets on Amazon’s series Bosch, now entering its fifth season. She also recently had a small role in the Amazon studios film Beautiful Boy starring Steve Carell and Timothee Chalamet, out on October 12.

In addition to acting, Amy also harbors a huge passion for gardening and has been tending to her home garden throughout our conversation. She has found a great way to combine that passion with philanthropy, and excitedly tells me about an Alzheimer’s fundraiser she recently participated in, the Longest Day, where she made blackberry jam from her garden to honor her father and his siblings. You can still donate here!