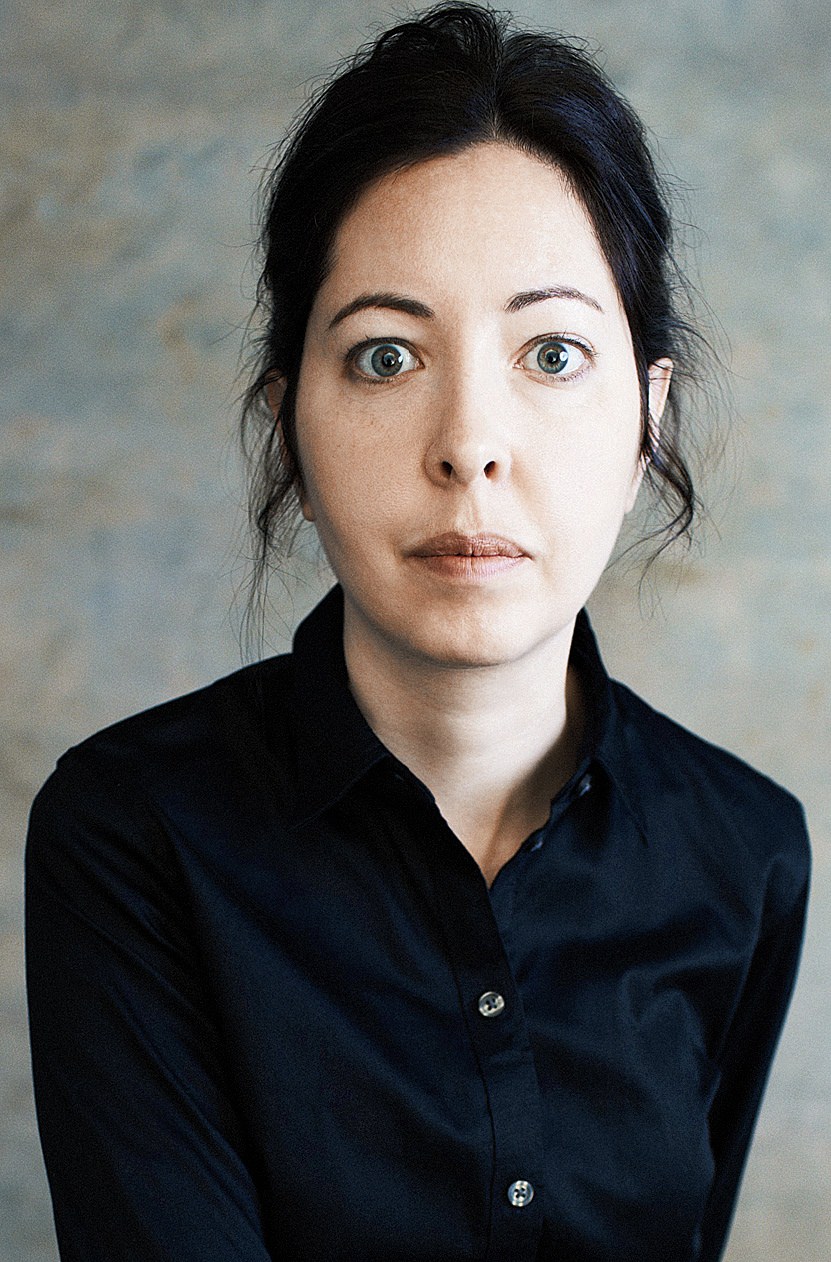 Sarah Manguso AB '97 did not dream of writing while growing up in Wellesley, Massachusetts. She didn’t write creatively in high school. In fact, the first time this poet, essayist, and soon-to-be novelist remembers writing—or, as she says, “consciously writing in a directed way, thinking about myself as engaging in ‘writing,’”—was in college, when she began composing short poems. The shift to poetry was part of an unexpected course change for Manguso, who arrived at Harvard from Wellesley High School with pre-med ambitions. As a “middle class townie girl,” she recalls, “the only greater achievement than getting into Harvard that my family or I could imagine [was] becoming a doctor. So I set out to become a doctor.” (photo to the left by Andy Ryan)

Luckily for fans of precise prose, she soon switched to studying literature, after getting “kicked out” of Chem 10 and nearly failing Calculus. But it wasn’t until her final semester of college, when she enrolled in Nobel laureate Seamus Heaney’s introductory poetry workshop, that Manguso’s writing life jumpstarted. The class, she remembers fondly, was “unlike any other course that I had taken in college. It engaged a part of me that had not previously been engaged at school. I really loved it. I really loved the work that I was doing. It was in that class that I thought, ‘Ok, well, this is maybe an alternative to all the other bad ideas I have about what to do after college.’”

Inspired by the poetry workshop, she applied directly to the poetry MFA program at the Iowa Writer’s Workshop—a bold move for someone who, by that point, had published one piece in the now defunct Boston Book Review (“not to be confused with the Boston Review”) and “had sent some poems to the Harvard Advocate, but they had never been printed.” Asked where the confidence to apply came from, she offers a characteristically brief explanation: “absolute ignorance.” At the time, she explains, “There was no internet yet, so I didn’t know what one did. I had a friend who was four years older, whom I had met as a freshman—she was a senior—and she had gone to Iowa. She was the only person I had ever met who had gone to creative writing school. I didn’t really realize that there were those programs.” Following the friend’s lead, she applied to Iowa in the weeks before her off-cycle graduation from Harvard. By the next August, just over half a year removed from her first creative writing seminar, Sarah Manguso was studying for an MFA in Iowa.

After feeling as though she “spent all of Harvard really scrambling,” she found her groove in Iowa—writing poetry, reading voraciously, and “borrowing” from the bookstore. “I would go to the bookstore and buy books and read them overnight,” she remembers, “then return them the next morning and make up some story about how my sister didn’t want the book. I don’t have a sister. It was great. I loved it. Everything about [Iowa] was easier than what I had dealt with in college.” Yet Manguso still wasn’t sure, in the years honing her craft at Iowa, whether she would or could make a living as a writer. Even now, the question of when she knew she could make a living at it induces a wry laugh—“Actually, I still haven’t had that thought yet, and I’m 43.” Even so, after graduating from Iowa and spending six months recovering in Wellesley from chronic illness and depression, she moved to New York City to build a life around writing. Her first collection of poems, a refined version of her MFA thesis titled The Captain Lands in Paradise, was published in 2002, followed by another collection of poems and short prose, Siste Viator, in 2006. In between books, she pieced together work as a copy editor, creative writing teacher, and freelance writer. “I lived very cheaply,” she recalls of that period. “I had no partner, I had no dependents, I had no car. It was a life designed around just getting to sit around and write as much as I could or as much as I wanted to, and copy editing was the easiest way for me to obtain enough income to do that.”

Despite the many pressures of her life as a writer—from chronic illness to paying the bills—Manguso managed to keep writing a priority by staying true to her intrinsic motivations. “I don’t do well if anything feels like homework,” she explains. “I just won’t do it. I just write what I want. That sounds so superior”—she pauses to qualify this motivation, lest she fall into the myth of the creative muse—“I prioritize what is important. I can’t say this enough: for me, writing is not really forcing myself to apply a discipline that I don’t naturally want to apply. Writing is just one of the things that I want to do. I don’t even want to give it a tinge of ‘I’m meant to write, I was born to write.’ It’s not like I’m inspired by some superior religiosity that leads me to this noble calling. I just kind of like doing it, so I do it.”

Writing precisely what she wanted weaves a common thread through Manguso’s work, including a shift from poetry to short-form prose with her third book, Hard to Admit and Harder to Escape. (She maintains, however, that “there was no shift” between poetry and prose. “My second poetry collection is almost entirely in prose, and my first poetry collection is about half in prose,” she says).  At the question of whether she thinks of herself now as a poet or a prose writer, she quickly identifies as the latter. “I think I was only masquerading as a poet,” she says, “I think I was a short form prose writer all along.”

It’s this short, sharp prose—“twice distilled,” as fellow Graywolf Press author Leslie Jamison AB ‘04 puts it—that separates Manguso’s work from legions of memoirs and essays. She deflects a request to self-describe her style, though when I mention that she has remarked that she “abhors filler,” she agrees with a similar terseness: “I don’t enjoy writing long.” She may not enjoy writing long, but she does write adamantly, taking a razor sharp and darkly funny pen to such complicated, dense topics as long-term illness, suicide, and the passage of time.

For example, she revisits episodes from her struggle with a rare autoimmune disorder—one that required chemotherapy and sidelined her from Harvard for a year—in The Two Kinds of Decay, a book that began as an essay about social class and “being a townie at Harvard” but turned into a collection of short prose pieces on spending your 20s with a chronic illness. Following a yearlong fellowship at the American Academy in Rome, Manguso wrote The Guardians (2012), a meditation on grief and an elegy for a friend, Harris, lost to suicide.

After moving to Los Angeles and becoming a mother, Manguso confronted her voluminous diary, a trove of over 800,000 words kept religiously since she was eighteen years old. Her book Ongoingness, published in 2015, explores her “vice” of ritualized remembering and a changing relationship with time. “It is about changing my mind,” she says, “about a way that I was that changed. I don’t worry about that diaristic record in the way that I used to, and it’s not as complete as it used to be.” She comments that the process of writing the book helped with “coming to understand that I was inhabiting time in a way that was different than the way I thought I had been inhabiting it during my need to obsessively catalog every goddamn thing that ever happened.” The pieces in Ongoingness confront the diary’s obsession with time and memory but, typical of Manguso’s concision, do not quote from the diary itself. Her most recent book, this year’s 300 Arguments, refines her prose even further into pithy pieces of wisdom, ranging from a sentence to a page in length, on longing, ambition, and failure. Manguso strives for the perfect sentence, writing three hundred aphorisms that could, she has stated, constitute “a long book’s quotable passages.”

Now based in Los Angeles with a spouse and a young child, there is no average day for Manguso. She balances writing with parenting, teaching, lectures, masterclasses, and various responsibilities that have, she says, “changed a lot of the entrenched work styles that I had developed up until the point of becoming a parent.” Manguso teaches at Cal Arts while she continues progress on her next two books, the aptly working-titled Book 8 and Book 9. Book 8 is a novel (though the prose, she reports, “feels the same”) and Book 9 is an essay similar in form to 300 Arguments.

While she openly acknowledges that she’s still figuring life out—navigating a balancing act of “always holding all these threads in my hand at once”—her advice to aspiring writers is, naturally, short and clear: “just write.” She specifies: “Don’t write what you feel obligated to write—like if you think a serious writer is supposed to write a certain type of book or in a certain genre or form, but you actually just want to draw these weird pictures with symbols inside of them, do the pictures, because you’re going to write what you want to write eventually, anyway, and you might as well skip all of that dutiful good student shit that comes out before that.”

You probably won’t get rich, she admits, but “there’s a wonderful pleasure in [doing whatever you want] and not a lot of people get to do that in any pursuit.”

And with that, she’s off to a “writing day,” followed by a non-writing day, coupled with a kid’s birthday party on Saturday and a potential writing day on Sunday—just another week in the balancing act, before it starts all over again.