Helen isn't getting anywhere in L.A. She's trying to write screenplays, but her ideas aren't great (even in her own opinion), and no one is interested in her work.

That’s how one reviewer described Helen Atherton, the protagonist of Karen Olsson’s new novel, All the Houses.

“I started with a 16 year old character named Nina, but Helen’s voice became more important,” says Karen. “Part of what keeps fiction writing alive for me is its unpredictability. Once I found Helen’s voice and decided on the backdrop of a political scandal, the story fell into place.”

All the Houses is set against the Iran-Contra affair during the Reagan Administration. “I wasn’t a political junkie as a kid,” she says. “I knew Iran-Contra was happening then, but I wasn’t following it and our family wasn’t talking about it over dinner.”

Karen was raised in Washington, D.C. and attended Sidwell Friends School. “I read a lot of novels, but I held them in such high esteem…it wasn’t until college that I realized that not everyone wants to write a novel,” she says. “Talking with someone who only wanted to be a mathematician really opened my eyes.”

Why did she select Harvard? “My dad (Phillip Olsson, ’62, LLB ’65) had gone there. We went to his twenty-fifth reunion and I fell in love with the campus--it was June and it was beautiful. I had no idea what lay in store the other months of the year, but from ninth grade on I wanted to go to Harvard.

“When I arrived as a freshman, I met people who became really good friends right away, and I was very happy to be there.”

Then as now, Karen was a person with many interests. “I came in with a few different ideas about what I might want to study. I thought I wanted to go into computer science but was also interested in journalism. I got my B.A. in math but didn’t want to go to graduate school for it.” So she opted for journalism and went to work at Civilization  magazine in Washington.

Within a year she was in Austin, Texas. “There was something appealing about getting to know that part of the country,” she says. “I though I’d just visit for a couple of months, but one thing led to another.”

Karen found her way to the Texas Observer. Eventually she served as co-editor of the paper whose motto was “The Tyrant’s Foe, The People’s Friend.” I felt very strongly about those stories and the power of journalism to bring attention to the real people behind the headlines,” she says. In addition, she has reviewed books, written profiles and contributed to Slate.com and The New York Times Magazine.

After living in Austin a few years, Karen started writing a novel. “As a journalist I’d been all over Texas writing stories set in many cities, but never Austin,” she explains. “I was interested in exploring my home town.” Her novel follows an alternative newsweekly reporter sniffing out corruption in the office of a conservative assemblywoman in Austin, the Texas capital. Once Waterloo was published, “it felt great to finally think of myself as a novelist, to have fiction become part of my public identity,” she says. 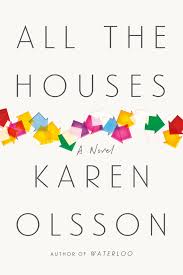 In 2006, she began the novel that would become All the Houses. At its core, it’s about one family, the difficulty of connecting and the reality that time doesn’t heal all wounds.

“I felt a bit like Helen did at the beginning of the story--a little depressed, not sure what to do next in life,” she says. “In that sense, All the Houses is a personal book but it’s not at all autobiographical. I had particular characters in my mind who were different and had different life histories from my actual family members.  But in writing in the first person about this fictional family, the real people were always there in shadow form--sometimes I’d have to push them out of the way and say ‘not this dad, that other dad’.”

Karen’s journalist’s eye is evident in All the Houses in her precise rendering of details from the Iran-Contra affair. “I love journalism but if I had to choose between journalism and fiction, I’d choose fiction.

“Novels are riskier and are really challenging. After each book I tell myself, ‘well, next time I’ll really figure out how to do one of these.’ Of course,” she says, “there’s that definition of a novel as ‘a long narrative with something wrong with it’.”

Her advice for aspiring novelists is simple: Just do it. “A novelist is the plow horse of the imaginative literature world—you have to spend time on it every day.”