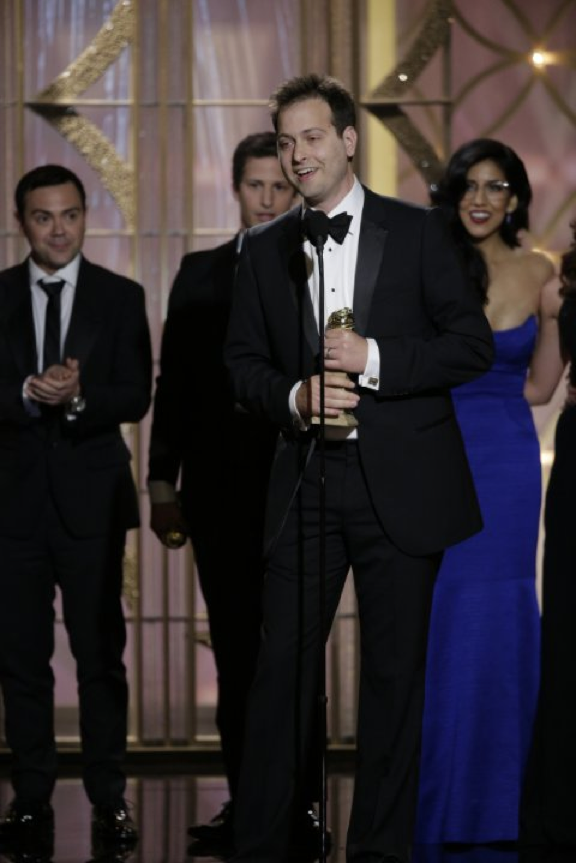 His brother enrolled in Juilliard’s pre-college program and went to high school at Saint Ann’s School in Brooklyn Heights. “I was exceptionally jealous,” Dan admits. Four years later, Dan, 14, had the same chance to board with a family and attend Saint Ann’s. He didn’t hesitate. “I lived on the top floor of the family’s brownstone and there were very few rules.” He did a lot of comedy and improvisation at Saint Ann’s, but most of his writing was serious. “I think I was scared to try to write something funny and then have it not be funny.”

Although Dan entered Harvard with a concentration in biochemistry, he didn’t see it as a career steppingstone. “I wanted to treat college as an end in itself. I was fortunate to have this wonderful oasis where my job was to learn and also to do extra-curricular activities with cool, interesting people” like his friends Charlie Grandy ‘97 and Mike Schur ’97.

Dan appeared in nine Harvard-Radcliffe Dramatic Club productions as well as experimental, improvisational and movement-based theater while at Harvard. As a senior, he received the Jonathan Levy Prize as the most promising actor at the University (“I think there was a sampling error.”) He was bound for medical school when he was invited to apply for an Eliot House travel grant. “At the end of a year of traveling around the world, I still intended to go to medical school but very much hoped it wouldn’t happen.”

During that year, his friends Charlie and Mike were writing in New York, Mike at Saturday Night Live. “Charlie had been my college writing partner,” Dan says. “When I got back from my year abroad I had four weeks before med school started. I asked Charlie if I could join him in preparing a [writing sample] packet for Saturday Night Live. It was truly a terrible packet.” Fortunately they learned The Daily Show had openings. “We wrote three pages of jokes and two weeks later we were hired there.”

After three years at The Daily Show, Charlie and Dan went their separate ways. “I made a conscious decision to stay in New York. Naively, I didn’t understand that for every opportunity in New York there were fifty in Los Angeles.”

After a year on Last Call with Carson Daly, Dan went on staff at Late Night with Conan O’Brien. “The show was very writer-driven and even junior writers got to produce the pieces they wrote. On top of that, we were doing 180 episodes a year so it was a great training ground.”

After four years, Dan wanted to write longer-form comedy. He moved to L.A. to work on an untitled new show created by Mike Schur with Greg Daniels ’85. He started out by spending several months at The Office. “It was a wonderful apprenticeship in an all-star writers’ room,” Dan says. “I learned the Mike Schur-Greg Daniels vocabulary for breaking stories.”

During the show’s third season, Dan wrote Family Practice, a comedy series pilot that wasn’t picked up. During the fifth season, Dan recalls, “Mike said ‘hey, if you’re thinking about writing a new show, I’d like to do it with you.’ Very quickly we got onto the idea for a comedy about a detective squad in an outer borough NYPD police station.”

Brooklyn Nine-Nine follows Jake Peralta (Andy Samberg), a skilled detective and prankster as he clashes with his by-the-book commanding officer (Andre Braugher). The show has been praised for its wit, originality and outstanding ensemble cast.

“Our amazing casting director Allison Jones not only found people who met our character descriptions, she also introduced us to the funniest, best people she knew,” Dan says. “When we met with Andy Samberg he immediately understood who the lead character was—‘a Comedy McNulty from The Wire.’

“We’d talked to Andre Braugher on Skype but hadn’t heard him read a word of our writing. At the table read, the first time he opened his mouth, everyone laughed. That was when I finally relaxed and thought “this could really work.”

The show not only worked, it scored a major upset its first season by beating Big Bang Theory, Girls, Modern Family and Parks and Recreation to win the 2014 Golden Globe as best TV comedy. (Andy Samberg won as best TV comedy actor.)

bk99.jpg“If you watch the season two finale—and you should—you’ll be excited for season three,” Dan says. “I know I am.” As for his post-Brooklyn Nine-Nine plans? “I’d like to write another show, or write a movie. But a long period of hibernation first would be nice.”

Asked whether he has any advice for aspiring TV comedy writers, Dan offers the following:

“Write all the time. Rewrite. Edit. Watch a ton of comedy. Make comedy videos with like-minded people and put them on the web--they could become your calling card.

“It’s not necessary, but I think it’s useful to perform. Do improv to learn how to say ‘yes’ to other people’s ideas and not be precious about your own.

“Finally, when you’re trying to develop stories, take off your critic’s hat and just write.”