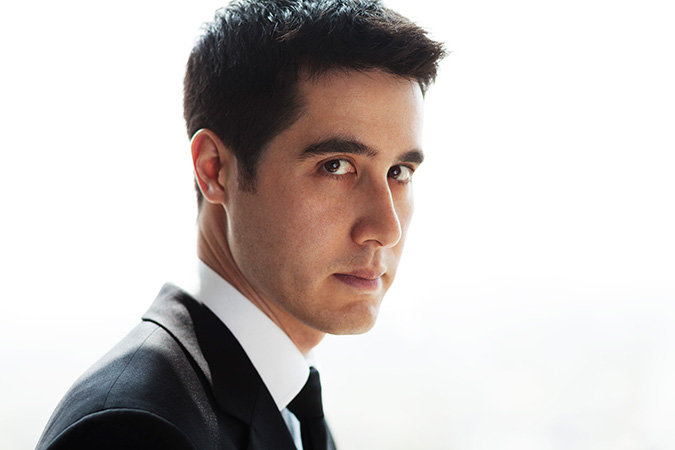 Photo to the left by Aaron Epstein

Calling David Kwong a magician is kind of like calling John Harvard a collector of books. It describes one of his many passions, but it only hints at what the man is becoming—and what he will ultimately become. Although not a household name (yet), Kwong has indeed “arrived,” tapping into the Zeitgeist on an enchanted path where highbrow Intelligentsia meets Hollywood spectacle in a tantalizing mix of performance art that both entertains and informs.

And by arrived, consider the following:

“I’m definitely not a cruise ship magician,” laughs Kwong as he zips in and out of traffic in his Prius, on the way to LAX to catch a flight to San Francisco where he’ll be speaking to a prestigious venture capital firm. Perhaps best known in town for his work on NOW YOU SEE ME, it’s also an apt description for his current lifestyle (“Now, you don’t”), having just performed at John Deere’s annual offsite meeting in Miami, FL, with plans to return to Los Angeles in just days to perform on a Saturday night at a prominent director’s private party.

Kwong readily admits that his presentation for TED2014, the 30th-anniversary of the renowned conference (David was part of the “Reshape” segment of the lecture series where he was billed as a cruciverbalist) changed his life (yet again), spurring his current role as a very much in demand speaker, where he is carving out his own distinctive alternative scene where magic and puzzles are cool – the antithesis of academia – in a place that he envisions as a new breed of illusion and enigmas. In simplistic terms, Kwong has synthesized live performance with lecture, acting as an entertainer and performer in a show where interactive is perhaps the ultimate understatement.

“My number one philosophy is that I want the audience or problem solver to feel smart,” Kwong imparts. “There’s a moment when you unlock the puzzle – the ‘A-Ha Moment’ – and I want my spectators to feel like they are learning and solving something extraordinary, that’s where I really get my juice.”

Raised as a prodigy by parents who both taught at the University of Rochester, Kwong has hilariously noted that “magicians are often viewed just one step above clowns,” but he has been seduced by the genre since he was a small child after witnessing a trick that even his erudite father could not explain. At Harvard, Kwong studied the history of magic and the rich history of illusion that informs his current practice, but instead of becoming a Vegas side-show performer, he instead accepted a marketing job at HBO in New York, which eventually led to him becoming a member of the DreamWorks Animation story department.

“As you can probably imagine, I’m a big proponent of a liberal arts education, because it lets you go wherever you want,” smiles Kwong. “You can be anything you want to be, and in my case, looking back until this point on my journey, it’s been a quest to bring intellectualism into the arts – a form of smart, sophisticated fun.”

While working as a Hollywood executive, Kwong founded the Misdirectors Guild, an elite band of experts in all areas of subterfuge such as stage illusion, sleight of hand, puzzles and heists who regularly consult on TV and film projects requiring an insider’s knowledge of illusion and deception. Along with the aforementioned NOW YOU SEE ME, Kwong has also worked on a variety of projects including THE INCREDIBLE BURT WONDERSTONE. HOUDINI and PARANORMAL ACTIVITY 4.

“Movies and big live shows need practical effects,” explains Kwong. “Perhaps a pop star needs to disappear from the stage, or maybe on a heist movie, the director is looking for a never before seen way to sneak into an air-tight facility. Whenever deception or trickery is involved, we’re the go-to-guys.”

Kwong retains his boyhood amazement for all things magic and is still blown away by performers who can dress up old tricks in a different way, and while he may not be fooled anymore, he appreciates novel takes on ancient ruses, including giving people a small peek behind the curtain.

“I think people can appreciate magic more when they see just how hard we work to perfect an illusion,” muses Kwong. “With NOW YOU SEE ME, no one left the theater prepared to surgically dissect a magic show. I think we gave them just enough to engage intellectually, and trade secrets are still paramount to me and the guild.”

While some aspects of Kwong’s future may also be secret, as his life has played out, he’s comfortable with the uncertainty of not always knowing the next step. He’s currently writing a book, and also building his own one-man show, a full theatrical experience where elements of his signature routine, The Lexicon, a 15’ x ’15 crossroad puzzle that materializes out of audience suggestions will almost certainly play a part.

We share a mantra, notes Kwong: “Let’s get the most people we can out there, solving problems and playing games that stimulate the imagination.”

What’s for certain is that Kwong will continue to amaze and enlighten us, even if he doesn’t know what’s next.

“I believe strongly that everything is relevant,” sounds a confident and passionate Kwong. “All the jobs that I have had along the way have led to this, a place where I can synthesize magic and puzzles and cross-pollinate the results into new areas of expertise.”

If you’re interested in adding a little more magic and meaning to your life, visit this link.