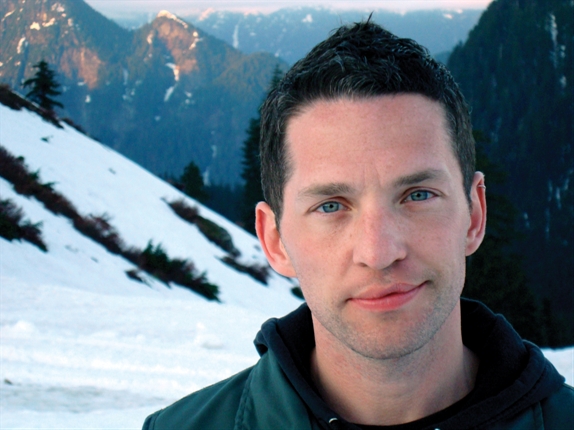 “I felt a need to run with my notions of sexuality, identity, and spirit,” relates FOX, “and THE SKIN I’M IN autobiography was a great way to get at tough issues. I was able to actually show people what it’s like, and I went there myself, fully vulnerable and sometimes ugly, but without sensationalism.”

In a serendipitous twist of fate, Fox was at the Byron Bay (Australia) International Film Festival for the world premiere of THE SKIN I’M IN when he met Zenith Virago, an activist and educator who for over 20 years has been returning this coastal region to a more communal, celebratory, and creative engagement with death and dying. The proverbial muse was now actually speaking directly to the artist and the feature-length documentary, ZEN & THE ART OF DYING was on that day conceived. Originally a young mother in Great Britain, and now, a lesbian, feminist, and self-described death-walker, Zenith Virago had found a kindred spirit in Fox, and she offered him unprecedented access into intimate experiences that delicately challenge our core assumptions about life – and shatter our taboos about death. Needless to say, Fox jumped at the chance.

“This new documentary represents a huge shift for me,” notes Fox. “It had been a while, and it was nice to have the camera on someone else. At the same time, I also felt tremendous pressure to do these stories justice. Zenith Virago and the community of Byron Bay, Australia were allowing me to chronicle intensely personal moments of death on camera with an unheard level of access. It was a leap of faith on both sides, and I had to get it right.”

As an Associate Professor of Media Arts & Culture at Occidental College in Los Angeles, Fox had researched and performed some critical writing on people using commercial technologies to manage pain, creating autobiographical video to document their own death. Then suddenly, Fox and his partner, Executive Producer Lee Biolos were living among the community of a renowned death-walker, delicately recording family-oriented death care traditions that were progressively lost to Western culture over the last century.

“Zenith was transforming a community. She’s an iconoclast and a one-of-a-kind character whose personal life informs her practice, and I knew immediately that this was a once in a lifetime opportunity,” beams Fox.

For six weeks, the small footprint of Fox shooting on a Panasonic HMC 150 Camcorder, while Biolos captured sound were allowed access to some incredibly humbling and inspiring moments, including a fifty-sixth birthday party – a living wake – and the funeral of a 25-year-old.

“As I tell my students, you don’t need massive budgets and specialized equipment to make meaningful work,” relates Fox. “We stayed small on this one and captured some very incredible moments.”

Fox’s own journey to Byron Bay began at Harvard where he “caught the bug” in regard to making media, and he has been telling complex narratives ever since. Originally working on marine biology research, Fox ultimately merged his love of all things phenomenological and narrative into a special concentration in the Visual & Environmental Studies department where he created science documentaries.

“I have always loved shark movies (SHARK WEEK/SHARKNADO!) where spectacle and entertainment are couched in a scientific narrative,” laughs Fox.

From there, Fox went on to do his graduate work at USC, a place where most of his classmates were focused on making big, very commercial movies. Fox, however, remained true to his vision, creating smaller-driven narratives and singular characters on their own hero’s journey, hopefully inspiring audiences to reflect on their own lives.”

“Okay, I know what you’re thinking,” smiles Fox. “A film about death is going to be heavy and morbidly sensationalized, but I can assure you, ZEN & THE ART OF DYING is not earnest or boring. I think it will surprise people.”

Fox engages with Zenith Virago as a person with incredible humor, someone who transforms her community in the roles of Queer, Feminist, Death-Walker, and Activist from beginning (Sexuality is the original Genesis) to the end, where death is looked at with a fresh new perspective.

“At the very least, I hope it makes people think about ‘doing death differently,’” intones a confident Fox. “Do you have an advanced directive and will? What do you want done with your body? Why are you scared?”

Picture editing on ZEN & THE ART OF DYING is finished, and Fox and his team are almost at the finish line, completing the final phases of post-production (sound design, music, color correction, mixing and mastering) in anticipation of the 2015 festival season. Fox was one of 12 California artists awarded a 2014 Artistic Innovation Grant from the Center for Cultural Innovation in support of the film. He has also taken a very “kick-starter” approach to funding this project, and visitors to the film’s website can make donations towards its completion, and any contributions to the documentary are tax deductible here in the U.S. and in Australia through the film’s fiscal sponsors.

Original music is now also being created by Ronit Kirchman (Yale ’95) who Fox also worked with on THE SKIN I’M IN.

“Human nature is such a powerful character – ashes to ashes and dust to dust – and with this return to the elements, I was afraid that music may manipulate an already emotional subject matter,” reflects Fox. “But when I started to hear some of Ronit’s exquisite soundscapes, I knew she had the right touch, and the music will take the film to an even deeper level.”

Fox looks to the future and giggles when he thinks of premiering ZEN & THE ART OF DYING in March of 2015 at the Byron Bay International Film Festival.

“Hey, maybe I’ll meet the muse for my next film!”

What’s for certain is that Fox will continue to make surprisingly fearless films that have a profound impact on peoples’ lives.