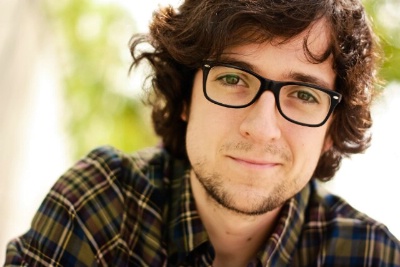 “I hate to say that I’m a pessimist because I’m very blessed and fortunate. But I am a bit of a pessimist in that I feel like I’m starting from scratch every single time,” he says of landing the next acting gig, “which I know is not true. But every time I don’t have a job, I start to panic and I’m sure I’ll never work again.”

In the meantime, HBO has announced its renewal of SILICON VALLEY for a second season, and Brener is featured in two independent films to be released this year, RUMPERBUTTS and UNREACHABLE BY CONVENTIONAL MEANS.

RUMPERBUTTS is written by his brother, Marc Brener, and follows a married, indie band duo who are miserable in their successful but soul-crushing gig on a children’s show.

“It’s about their journey to find each other again, find music again, and come back to their roots,” explains Brener. “It’s a really sweet and funny movie, and I’m excited about it.”

Brener previously collaborated with his brother on a 2012 short that Marc wrote and directed called SAY IT AIN’T SOLO. Josh continues to work closely with people who are very near and dear to him, including his fiancée Meghan Falcone, whom he met at an improv class in Los Angeles six years ago. Together, they are working on several comedy projects, including a television pilot and a female-centric feature.

“I’m lucky that my brother is very talented and also very patient, so it’s a pleasure to work with him. The same is true of Meghan,” says Brener, before joking, “Hopefully we’ll have something to show for it before we have a failed relationship to show for it. I’ve been forewarned by so many people that it’s a terrible idea [to collaborate], but we get along great and we like spending time with each other.”

Indeed, spending time with a girl is what first inspired Brener to start acting in middle school. When a knee injury prevented him from playing Little League baseball during the season, Brener decided to join the school play to hang out with his sixth-grade girlfriend. He was immediately hooked — on theater. From then on, Brener performed in several school plays every year through the end of high school. He even aspired to attend Yale for its prestigious theater program.

“Of course, when people talk about Yale theater, they’re talking about Yale School of Drama, which is a graduate school. What did I know?”

At Harvard, Brener took advantage of all opportunities to act, write, and perform improv. In addition to being involved with On Thin Ice, Harvard’s oldest improv troupe, Brener was the ‘06-‘07 President of the Hasty Pudding.

“I had infinitely more opportunities at Harvard to do theater and be creative without anyone really telling us what we had to do. I was lucky to fall in with the Pudding.”

Asked whether he’d like to return to theater work, Brener quips, “Mostly I just want to do another Pudding show, but as many times as I audition, they refuse to have me back.”

Brener selected English as his concentration so that he could take classes at the American Repertory Theatre for credit, and he completed a creative thesis that he calls a “terrible, terrible, terrible play — but it was better than writing a real thesis that required lots of research and citations.”

After graduating from Harvard, Brener and a couple friends hopped into his 1992 Camry and drove cross-country to Los Angeles, where, like many aspiring creatives, he first lived in a shabby apartment with a his brother Marc and another roommate. In the same grand tradition, he supported himself by tutoring, bartending, and waiting tables. Through Harvardwood, Brener also landed a personal assistant job, “which helped me eat before I was able to do anything else.”

Once in Los Angeles, Brener was quickly introduced to his brother’s circle of friends, many of whom work in entertainment.

“Two [of Marc’s friends] happened to be agents, and I would ask them for advice and annoy them endlessly,” says Brener. “They would send me to acting classes, recommend acting coaches, and little by little, they’d send me to an audition here, an audition there. I’m still bothering them to this day.”

Those first auditions were especially challenging, as Brener experienced “tremendous growing pains moving from the Hasty Pudding style of performance to the subtle art that is film and TV acting.”

For his first L.A. audition, Brener read for casting director Susan Vash, who has since become a very good friend of his, and she recommended some acting classes for him.

“I went and took a bunch of acting classes where the instructors would say, ‘Josh, less, less, less,’” Brener mimics. “After I heard that for 18 months, I went back and met Susan, who said, ‘Oh, you’ve almost sort of figured out what you’re doing.’

“And every once in a while, I’ll go back and she’ll say, ‘Oh, you lost it again.’ Always a learning process.”

The first role Brener booked was originally as a guest star on the television series GLORY DAZE, before the role was transformed from guest star to series regular. Ultimately, he appeared in 10 episodes of the show during its single season.

Despite the lucky role change that put him on the map, Brener has maintained a healthy, if somewhat pessimistic, perspective of the ups and downs of acting life. Many of his experiences, successful or otherwise, highlight the unpredictability of the entertainment industry.

Before GLORY DAZE, Brener was in the running for the lead part in an exciting pilot.

Now, Brener plays one of the main characters on Mike Judge’s SILICON VALLEY, which has been very positively received by critics and the public alike.

“I feel so lucky to be a part of a show that is a success, that people are liking and responding to. It’s so exciting and I’m so grateful to have tricked them into hiring me to be a part of it,” he says.

At his SILICON VALLEY audition, Brener read for creator Mike Judge and producers John Altschuler and Dave Krinsky, and they discussed the series’ theme with him.

Describing Silicon Valley and the fast-paced tech industry, “Mike said, ‘Yeah, it’s that weird thing where at any moment, you can look around and all of a sudden somebody you know is rich and famous, and you’re still just nobody,’” recounts Brener. “And I said, ‘Yeah, I can imagine what that might feel like.’”

Recent college graduates struggling to “make it” — whether they live in Tinseltown or tech central, whether they’re aspiring stars or start-ups — face many of the same internal challenges.

“There are a lot of similarities in terms of pressure, inferiority complexes, looking over your shoulder, and, you know, panic.” Brener concludes, “It all comes down to panic with me.”

But unlike his SILICON VALLEY character Big Head, who tricks tech company Hooli into offering him a lucrative contract for no work, Brener has earned every credit on his acting resume through talent, practice, and, just as importantly, an infectiously positive and down-to-earth attitude.

A self-identified Harry Potter nerd, Brener describes one of his most memorable set experiences with a giddiness that is almost tangible. THE INTERNSHIP features a Quidditch match, and the cast played a scrimmage to warm up for the following day’s shoot, with Brener as seeker.

“I chased after the Golden Snitch, and I got it! The tennis ball is dangling from this guy’s [back pocket], and I pulled it and I spiked the ball and was going crazy celebrating,” he describes. “And ten minutes later, I realized that I had broken my finger. That’s what a genius I am. I got injured playing a fake sport in a fake rehearsal for a fake movie.”

In addition to sustaining glamorous on-set injuries, Brener’s genius is recognizing the importance of completely and actively engaging in one’s work at all times.

“One of the hardest things to do, especially with acting, is to always be doing something. It’s very easy to fall into waiting for the phone to ring, waiting for someone to give you an audition,” admits Brener. “It’s a very passive thing where you hope that someone’s getting you a job or working for you and you’re waiting for an opportunity.”

“The most important thing is to activate and to always be chasing it,” he says, though he may be referring to the Golden Snitch. “Whether it’s being in classes, dropping your resume at the doors of casting directors, putting on plays, doing improv, or shooting a web series — whatever it is that keeps you activated and acting, that’s the most important thing because it’s so easy to stall out if you don’t have that momentum. That’s my advice, having followed none of it ever because I do nothing. I’m so lazy and I never get off my couch.”

Likewise, we’ll be on our couches tonight to watch Brener in the season finale of SILICON VALLEY, which airs on HBO at 7pm PT / 10pm ET.