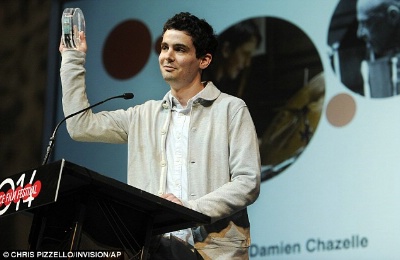 Not to mention that before hitting his ten-year college reunion, Chazelle has already sold three screenplays, and his directorial debut, GUY AND MADELINE ON A PARK BENCH (2009), won multiple film awards and was named one of the best films of the year byThe New York Times, The Boston Globe, The Village Voice, and more.

"Ever since I was a little kid, I knew that I wanted to make movies," says Chazelle. Instead of choosing film school for college, he opted to attend Harvard College, where he expected to concentrate in English or a similar field. Then, he discovered Visual & Environmental Sciences.

"The VES Department wound up being a great resource for me. It certainly enabled me to make my first film and also to meet a lot of my future collaborators, such as Jasmine (McGlade Chazelle AB ‘07) and Justin Hurwitz (AB ‘07)."

Jasmine McGlade Chazelle, an alum of the Harvardwood 101 program, is also a director, producer, and writer (MARIA MY LOVE, 2011). Though they have not collaborated since she was a producer of GUY & MADELINE ON A PARK BENCH, the Chazelles continue to be the first readers of each other’s writing.

GUY & MADELINE ON A PARK BENCH was originally conceived as Damien’s senior thesis at Harvard. He wrote the lyrics for the American jazz featured in the musical film, and the score was composed by long-time friend and collaborator Hurwitz.

Upon its release in 2009, the film premiered at the Tribeca Film Festival, AFI Los Angeles, the Torino Film Festival, and the Chicago International Movies & Music Festival, among numerous other international festivals. The film’s positive reception by critics provided a strong foundation for Chazelle's career in entertainment, as he began selling scripts and obtaining regular work as a screenwriter.

Before making GUY & MADELINE ON A PARK BENCH, Chazelle had supported himself by tutoring and other freelance work.

"The plan [after graduation] was to make films. It was just a matter of getting into a position where you can make what you want to make. It’s always more difficult than it should be."

The next script he wrote was GRAND PIANO, which was directed by Eugenio Mira and is slated for limited release in the United States in March 2014. GRAND PIANO, featuring Elijah Wood and John Cusack, is an intense thriller about a concert pianist who becomes the target of an assassin during his comeback performance.

Another spec thriller by Chazelle, THE CLAIM, was featured on the 2010 Black List and has since been acquired by Route One.

Though Chazelle boasts a writing portfolio that most up-and-coming screenwriters would covet, he views his writing projects differently.

After finishing GUY & MADELINE ON A PARK BENCH, Chazelle explains matter-of-factly, "I needed to make some money, so I wrote something commercial, the kind of movie that I liked to watch as a kid—a straight-edge thriller. That began the writing-for-hire career that I’ve always separated very much from the directing."

This is in stark contrast to Chazelle’s film WHIPLASH, which—like GUY & MADELINE ON A PARK BENCH—he wrote and directed.

"Any directing I do, I want [the work] to be personal, to be a certain kind of film. But when it comes to the writing, it was either going to be that or working at Starbucks. With writing, at least you get to do some version of what you like to do."

The first draft of WHIPLASH was completed in 2011, when Chazelle was "dealing with memories of certain experiences, but had never really thought about dramatizing them. Then one day, it occurred to me that I could and should do that, so I did."

Those experiences occurred during Chazelle’s high school years, when music and jazz drumming became much more than just a hobby.

"I had a teacher-conductor in high school who was very charismatic, inspiring, and also very terrifying. He compelled me to practice like there was no tomorrow. Basically, that became my life for a while."

WHIPLASH follows a young jazz drummer who attends a prestigious conservatory, where he struggles under the tutelage of an unforgiving music teacher, played by J.K. Simmons.

Chazelle hastens to clarify that his real-life music teacher, who passed away shortly after he graduated from high school, did not resemble at all Simmons’s sadistic character in WHIPLASH.

Rather, the inspiration for the film came from Chazelle’s experience "as an impressionable young musician overwhelmed by this larger-than-life teacher, from the teacher-student relationship of yearning for someone’s approval—of being simultaneously scared by and inspired by someone, and having this mix of feelings where you hate feeling so anxious and terrified, and yet, you become a better musician than you ever would have without it."

WHIPLASH made the 2012 Black List, and then Chazelle condensed the feature-length script into an 18-minute short to serve as a "proof of concept” to pitch the feature to investors and financiers. This short version of WHIPLASH was adapted from a 20-minute scene from the middle of the script that takes place in one room.

"We had to make a few adjustments, but not much; you got an idea of the world. It’s not quite a full story, in the sense that I would hope the feature is, but it didn’t really need to be jiggered too much to stand on its own."

Doing more than simply standing on its own, the short version of WHIPLASH won the Short Film Jury Prize for U.S. Fiction at last year’s Sundance Film Festival. With the support of Jason Reitman, the feature version of WHIPLASH was developed by Right of Way Films, Bold Films, Jason Blum’s Blumhouse Productions, and producer Nicholas Britell, among others.

Chazelle spent the summer of 2013 directing the feature-length version of WHIPLASH, and at the time of this interview, he was preparing it to open Sundance on January 16th as an entry in the U.S. Dramatic Competition. This is Chazelle’s favorite part of the filmmaking process—being in the editing room.

"The editing room is where I feel the most at ease," says Chazelle. "The whole filmmaking process has its pros and cons. Writing has those momentary thrills where you hit on something that you’re proud of or get a rhythm going, but I have a hard time losing myself in the writing. I definitely prefer directing to writing, but I can really lose myself in the making."

Chazelle’s preference may even be rooted in his musical background as a jazz drummer.

"Editing is the most rhythmic part of filmmaking, where the process becomes about tempo and timing. I intuitively respond to that."

"I certainly feel a lot of performance anxiety, whether I’m stepping onto the set or, even more so, screening something I’ve done. It’s more terrifying than anything on set. Every time I’m at a screening, I feel like I’m back in the jazz outfit as a drummer, about to go onstage."

At opening night of Sundance, Chazelle may feel as nervous as his protagonist, but expect audience members and critics to be blown away by his performance as director/writer of WHIPLASH.