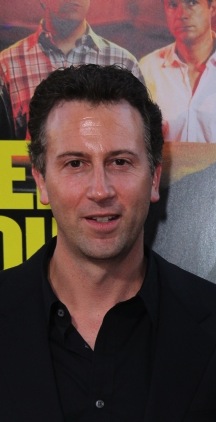 While camping in the remote Yukon, a former class clown learns he’s been accepted by Harvard Law School.

"I decided ‘I’ll apply and see what happens,’” Jonathan Goldstein HLS '95 says. "I never thought I’d get in.”

Nor did he imagine that law school would lead to a career as a screenwriter. This summer, Jonathan and his writing partner sold THE BUS DRIVER, a comedy pitch, to New Line for seven figures.

"I always had a predilection for comedy,” Jonathan recalls. "One of the highlights of my childhood was when we got HBO—I watched movies like AIRPLANE and CADDYSHACK over and over. I was in trouble a lot in school because I was always making jokes and being sent to the principal’s office.”

By high school, he found a way to channel those energies. "I’d borrow the Betamax videocamera from the school library and make weird short films with my friends. Senior year I got a lot of teachers to be in a 40-minute film I made called APOCALYPSE HERE.”

While Jonathan saw himself doing something humor-related after graduation, "for the life of me I didn’t know how I’d make a living.”

He did the logical thing—got a degree in German Literature from the University of Michigan and moved to Berlin for a year. "It was an interesting time, right after the Berlin Wall came down.”

Jonathan planned to get a masters degree in International Relations until a friend at Harvard Law School persuaded him he could do international relations and more with a law degree. "So I applied, then drove alone from New York to Alaska as a last hurrah.”

Cut to the fateful phone call--"my mom said ‘you got into Harvard!’”--and his move to Boston.

"I took the least lawyerly classes, like Novels and the Law,” Jonathan says. He also co-wrote a restaurant review column with a classmate who was working on a Simpsons spec. "I read his stuff and thought, ‘So this is how you get into that business.’ I sat down to try it myself and had one of those moments when things clicked into place--it came very naturally to me.”

After graduation, Jonathan joined a New York law firm."Partly it was the $86,000 debt I was carrying,” he explains,"but also I wanted to see whether I liked being a lawyer.”

When he told the firm he was leaving, "they put out an announcement,” he says. "Usually it’s ‘so-and-so is leaving to become in-house counsel’ somewhere, but in my case it was ‘he’s leaving to pursue a career in comedy writing.’ All these associates came to my office and said ‘I’m so jealous!’” Jonathan moved to L.A. knowing only that he could crash on a friend’s couch.

"I wrote a couple of scripts on the way out and bought a fax machine. I faxed three dozen managers and agents saying I graduated from Harvard Law School and asking if they’d be willing to read my scripts. A few responded and I actually got a manager through that. Then I got an agent, and luckily within six months I got on a show.”

While working as a writer on THE GEENA DAVIS SHOW in 2000, he met actor John Francis Daley. "John totally reminded me of myself when I was his age,” Jonathan recalls. "He had made short films like the ones I made in high school, and we had the same sense of humor. We've been in the same head space since day one.”

The pair’s first spec script, THE $40,000 MAN, made the 2007 Black List and was bought by New Line. "There was a bidding war—it opened a lot of doors for us,” Jonathan recalls.

Over the years, Jonathan and John continued their separate television work, Jonathan as a writer and producer on shows like GOOD MORNING MIAMI, and THE NEW ADVENTURES OF OLD CHRISTINE, and John as an actor--he plays Dr. Sweets on BONES. When they write, they work together sitting in the same room or online sharing a screen. "If something makes just one of us laugh we’ll keep working on it,” Jonathan notes, "but if it makes both of us laugh then probably it’ll make other people laugh.”

In 2009, New Line brought in a group of writers to pitch ideas and jokes for Michael Markowitz’s script, HORRIBLE BOSSES. "Apparently, the ideas we pitched were interesting to the studio because they asked us to rewrite the script,” Jonathan says. "The original tone was darker and more in-your-face; we brought it down to Earth, really tried to ground it. We were interested in how real people would act in these extreme circumstances. It’s a bit raunchy, but never because it’s trying to be offensive.”Bosses went on to make over $200 million worldwide.

"John and I don’t want to be branded as just hard-R guys—in this business you have to keep as many irons in the fire as possible because you don’t know what’s going to get made. Now that I’m a father, I’m equally drawn to family-friendly projects. I want my son to be able to watch some of the films I’ve done before he’s 17.”

One such film is 2013’s THE INCREDIBLE BURT WONDERSTONE, about a pair of old-school Vegas magicians (Steve Carell and Steve Buscemi) and their street magician nemesis (Jim Carrey). "Vegas magic lives in the PG-13 world,” Jonathan says. "Steve Carell really loved the script. There were certain things that he wanted to tweak, as any actor would, and he was very collaborative. Once Jim Carrey came on board we went to his house and worked with him, tailoring the role to fit him. The character became an edgy, messianic sort of figure.”

Jonathan’s next film in this space is CLOUDY WITH A CHANCE OF MEATBALLS 2. "We loved the original movie--it played really well for adults and kids,” Jonathan says. "This time around, the food machine is creating sentient food animals like shrimpanzees. It’s a rich, funny Jurassic Park world with a terrific villain.”

Next year we’ll see Jonathan and John’s first feature as co-writer-directors, the reboot of the VACATION franchise. "As happy as we’ve been with the movies we’ve gotten made with other directors, it feels like we’re only doing half the job when we write it and give it to someone else,” Jonathan says. "We wanted a shot at translating what we put on the page to the screen without an intermediary.”

Jonathan calls the new VACATION "a family road trip movie with an edge. Rusty (the son of Chevy Chase’s character in the original) is all grown up and he’s taking his family to Walley World. We cast Ed Helms as Rusty and Christina Applegate as his wife, and it’s looking like Chevy Chase and Beverly D’Angelo will be back as the grandparents.”

Writer, director and soon perhaps, producer: "We’re also working with younger new writers who have good ideas, helping them with their scripts,” Jonathan says. "If they sell and get made, then we’ll be producers on those.”

What advice does he have for aspiring screenwriters?

"Even though you put your heart and soul into your script, you can’t be too attached to it. Try to write as many things as you can, get them out there, get them read. Be open to people who know the business—take their feedback to heart, have some humility. I’ve been doing this for a while and I’m still learning as I go.”