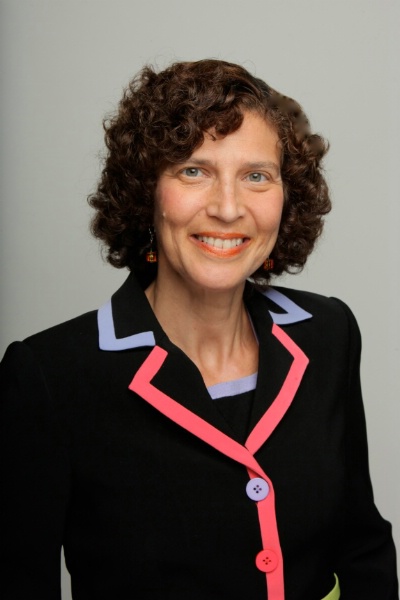 Liz Ryan ’81 was recently elected to the Board of Directors of the Directors Guild of America, and is proud to report her name sits on their website just above Steven Spielberg's!  She says that she overuses the phrases, "Wow,” and "that’s really interesting,” and this curiosity and enthusiasm have propelled her to the top of her profession as an Assistant Director of TV shows and films.  Her last film, GO FOR SISTERS, was shot in the deserts of Acton and Colexico, California, and Mexicali and Tijuana, Mexico and due out this fall, was directed by John Sayles.  Her TV credits include NYPD BLUE, FREAKS AND GEEKS, THE OFFICE, and THE REAL HUSBANDS OF HOLLYWOOD.

She considers herself an optimist and has meditated for years.  Ryan notes that "for a woman, the greatest challenge of being a director is getting the job.”  She continues, stating that, "more often than not, we have to raise the money to make a movie ourselves.”  However, even if gender still may be an obstacle in Hollywood, Ryan has been overcoming obstacles since her youth and she continues to persevere to do work she loves.

When she was a child, she lied about her age and gender to work as a "paperboy” to earn money to contribute to the household. Every morning, she would help her mother get out of bed and into her wheelchair and clothes. Her mother was raising her as a single mom and had become handicapped as the result of a terrible car accident that occurred when Liz was 10. After a basic breakfast, she would take the city bus to school with a friend who later became a militant Black Muslim and now considers Liz her only white friend. As a youngster, Liz enjoyed math the most, but in high school, 19th-century French and English literature, and science labs became her preferred subjects. She played tennis as well – and, like many high school-aged girls, the opposite sex intrigued her, too. Liz’s mother, who later became a well-known spiritual healer, made an indelible impression on the young Liz. Her mother’s example allowed Liz to see that anything and everything is possible in this world and, when she matriculated at Harvard, Liz decided to become a chemist. (One of the most charismatic teachers at Hackensack High School, from which she graduated, had taught Chemistry. Therefore, most of the academically-inclined students had decided to become chemists and Liz, in fact, agonized over whether to attend MIT or Harvard. The financial aid package that Harvard offered ultimately helped her decide.) At Harvard, she found the classes that dealt with subatomic particle physics, groundbreaking science at the time, to be fascinating.

Ryan also comped The Crimson and covered hockey, wrote restaurant and music reviews, and even interviewed the Dalai Lama when he visited Harvard. She pondered her future in chemistry and, observing that the long hours ensconced in a laboratory environment required of Chemistry concentrators would interfere with her schedule of articles for The Crimson, she decided to change her concentration to Sociology. She studied "deviant group behavior,” which she says has aided her enormously in the entertainment business.

Ryan lived in Quincy House, a "jock house” at that time, and she was also elected to student government, tutored the blind, worked at the Kennedy School as a writer for the quarterly newsletter there, rowed intramural crew and enjoyed running by the Charles. She also wrote the libretto for an entry to the annual Hasty Pudding musical comedy competition. Once, when she hadn’t done the required reading for a section meeting, the Sociology TA asked her what she thought. She admitted that she hadn’t read the material, to which he said "That’s no excuse. You’ve heard the conversation. Don’t you have an opinion?” Context is everything, she recognized, and, perhaps more important, listening well is a critical skill in and of itself.

Starting as a Directors Guild of America Trainee in New York City, Ryan feels fortunate to have been able to work her way up in the business as an Assistant Director "with everyone from Peter Weir to Brian DePalma, Frank Darabont, Phil Joanou and John Sayles.” Her specialty is staging thousands of extras (BROKEDOWN PALACE, AUTOUR d' MINUIT, BONFIRE OF THE VANITIES), and she has done this kind of orchestration for over 60 productions. Directing Claire Danes and Kate Backinsale on a raft in the middle of the Pasig River in Manila for BROKEDOWN PALACE, GREEN CARD'S opening scene of a litttle drummer boy in the New York subway, Card, and the scene in THE GREEN MILE of Tom Hanks and the mouse, are scenes of which she feels proudest. A few years ago, her short film, AWSTRUCK, won several awards and she just staged a script that she and a writing partner had adapted from a novel and hopes that it will result in a full-length movie in the near future. (She is working on casting the potential film, distribution and funding, at the moment.) She looks forward to having the opportunity to direct a script of her own.

The stories that most interest Ryan are those in which there is a moral component. Stories in which a character experiences personal growth, for instance, and becomes a stronger or kinder person, are those she adores. She admires individuals who "struggle against all obstacles to create rather than destroy.” Maya Angelou, Wangari Maathai, the founder of Kenya’s Green Belt Movement which mobilized thousands of Africans to plant trees, Professor Jennifer Learning of Harvard’s School of Public Health, who is using internet charity to raise funds to achieve goals related to world health, and Katherine Bigelow, the film director, who has made movies "her way, even if she has had to go half way around the world for her funding,” are all individuals whom Ryan admires. As for directors, Billy Wilder, Elia Kazan, Francois Truffaut and David O. Russell are on her short list of those who inspire her.

Ryan’s advice to potential new entrants to "the biz” is that they never stop writing and that they recognize that "even the most successful directors work sporadically. Editors, cinematographers, assistant directors, electricians, grips, costume designers, etc., can move from project to project on a wide variety of projects.”