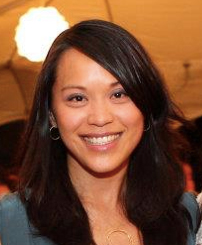 Raised in Hong Kong and educated in the UK, Melissa Lee '03 came to Harvard to study biochemistry—then a core curriculum class in French cinema changed everything.

She spent the next two years with Morgan Stanley in their Mergers & Acquisitions Division, first in Los Angeles and then in Hong Kong. "It was a great experience, I use those finance skills to this day.”

A conversation with a friend of a friend sparked her interest in The Peter Stark Producing Program at USC. "I didn’t have a clear idea of what producing was at the time,” she says, "but I’d always been interested in a career where I could be involved on both the creative and the business sides.” She went from 120-hour weeks in investment banking to immersion in the film world. "I made lifelong friends and learned so much.”

After earning her MFA in 2007, Melissa immediately sought projects to produce. Funding for independent films was hard to come by in the wake of the economic downturn. Also, she notes, "it’s a constant struggle for independent producers to make a living. Often producers aren’t compensated for the time and energy they put into projects. If a budget seems too high, the producer fee is often the first line item to be compromised. Many great films get made because of that sacrifice.”

In 2008, Melissa’s first feature, DEAR LEMON LIMA, went into production. Writer/director Suzi Yoonessi said Melissa and her co-producer "actualized what seemed impossible on a small budget,” and the film was complimented for its big budget look.

"The thing about producing is that every situation is different and involves challenges you can’t possibly anticipate,” Melissa says. "I played many roles, from managing the budget to driving a truck. It was an amazing experience.”

DEAR LEMON LIMA was a quirky coming-of-age story told through the diary writings of a 13-year-old half-Alaskan native girl. Melissa’s next feature, CIRCUMSTANCE, explored the struggle of a wealthy family in Tehran to contain a daughter's sexual rebellion and her brother's dangerous obsession.

"DEAR LEMON LIMA was shot in the U.S. with a SAG contract; the fundamentals of the physical production were very much filmmaking that you learn or talk about at film school,” Melissa says. In contrast, "We shot CIRCUMSTANCE in Lebanon in 2009, non-union. The working language was Arabic then French then English, and some of the actors only spoke Farsi.”

She continues, "Lebanon is an unpredictable country but fortunately we were there during a relatively quiet period. You approach things with a different mindset when a lot of your crew has grown up surrounded by civil war--it’s quite a reality check.” Much of the editing work was done in Chile. "After the really big earthquake there, one of the first e-mails I got from Maryam Keshavarz (the writer/director) was ‘we’re all OK and the hard drives are OK.’”

CIRCUMSTANCE premiered at the Sundance Film Festival in January 2011. "Despite being one of the few non-English language films in the U.S. dramatic category, CIRCUMSTANCE won the Audience Award,” Melissa says. The film was acquired by Participant Media.

Five months later, Melissa was back in Utah as a Fellow at the Sundance Institute Creative Producing Lab. Her feature project, THE MAGLEV STORY, follows a Taiwanese "hikikomori” shut-in boy who leaves his room for the first time in years to go to Shanghai; while there, he forms a relationship with a local girl.

"Their interaction comes from their ability to communicate without words,” Melissa says. Both she and the film’s writer/director Anthony Ng "grew up within an Asian culture, but we’ve had enough time away to come back and look at it differently or in a way that celebrates it.” Having produced films in the U.S., the Middle East and Asia, Melissa says she’s not tied to a single geographic area: "It’s about the story and the filmmakers.” Still, she notes, "part of the reason I moved back to Asia was because I wanted to be more involved in stories based here.”

Her most recent project is BENDS, from writer/director Flora Lau. BENDS tells the parallel stories of a wealthy Hong Kong housewife and her chauffeur; the housewife faces the loss of her lifestyle when her husband disappears under a financial cloud, and the chauffeur wants to bring his pregnant wife from Mainland China to give birth to their second child in Hong Kong. "It’s an important, topical story,” says Melissa.

In addition to her film projects, Melissa produces commercials in Shanghai. "For the moment, I like the balance,” she says. "Commercial work exposes me to different production challenges and gives me the opportunity to work with experienced directors from around the world. I like the autonomy and influence that come with producing smaller films, but it would be great to work on bigger budget projects where we could afford the cast, crew, locations or whatever is needed for a top quality production.”

When asked how she would advise aspiring producers, Melissa says "embrace any opportunity to learn when you’re starting out, you never know where it could lead.” In Melissa’s case, it led to France -- BENDS premiered this summer as an official selection of Un Certain Regard, the Cannes Film Festival’s survey of current world cinema.