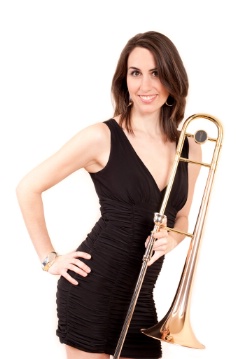 Elizabeth Frascoia '00, who was known as Elizabeth Dotson-Westphalen in college and in the years prior to getting married, is a trombone player, singer, composer, arranger and jazz educator. She says that she finally "admitted that she wanted to play music” in her mid-twenties after having worked in the dot-com sector in the early 2000s. After this realization, Frascoia attended Queens College, where she earned a graduate degree in music; she has been teaching, touring, writing songs and playing in venues in the New York area as well as internationally, ever since. This Vermont native’s love for music was kindled in childhood. Her father is a jazz musician, her grandmother taught piano, and her mother is also musical, so growing up in the family home in Woodstock, Vermont, Frascoia was exposed to the sounds of some of her now-favorite musicians such as Stevie Wonder, Ella Fitzgerald, Michael Jackson, Whitney Houston, and Ray Anderson, a trombone player.

In fifth grade, Frascoia chose the trombone. Why not? Although most girls gravitated – or were steered towards – instruments such as the flute, violin and clarinet, Frascoia said she found the trombone fascinating. She still loves the way that the instrument can glide between notes, unlike instruments such as the piano where there are distinct keys for each note. In high school, she continued to play the trombone and she also explored her love of acting. And, this musician who has toured internationally as a member of Michael Bolton’s band, and who has been a guest musician on the hit TV show, AMERICAN IDOL this year and last year, says that her five-week music course at Berklee College of Music in Boston during a summer in high school, allowed her to meet young musicians from other countries and showed her how music could transform a person’s life. She saw how mastering an instrument had enabled all of those she studied with that summer the opportunity to attend a prestigious program in a city that was new to most of them, and realized that a career in music also offered the possibility of international travel and friendships with those who grew up in settings that contrasted greatly with the tranquil Vermont setting of her childhood.

Frascoia is still in contact with friends from this transformative summer, and, as a teacher, she works to help children gain confidence in themselves through music. She currently teaches classes each week on the Lower East Side of Manhattan, at Cornelia Connelly, a Catholic school for less-advantaged middle school girls. Here, she shows her students that they can "be creative” and that they can have fun learning piano. Frascoia thinks that girls, in particular, need to be encouraged more since there are fewer female role models, especially in the jazz world. She is also the Program Director of the Governor’s Institute for the Arts in her native Vermont. She attended this program and appreciates the fact that she is able to give back to students from her home state and show them that a career in music and the arts is, in fact, possible. (N.B. She is available to conduct workshops at schools across the country, so if any Harvardwood readers would like to have her visit a school with which they are affiliated, she would be delighted!)

Hurlbut and Eliot House were both home to Frascoia at Harvard and she now lives with her husband in the Williamsburg section of Brooklyn. She says that Harvard taught her to "say yes to things and to accept opportunities.” This psychology concentrator who specialized in neuroscience played in that Jazz Band in college and who also participated in Ballroom Dance may not have envisioned herself playing gigs in the New York City subway after graduation. But, Frascoia hints that the desire to make her living as a musician was always right under the surface, even though she wasn’t sure, even in college, that she would be able to make this dream become reality. "Life is different every day,” Frascoia says about her professional life in music. One of her greatest challenges is "staying motivated to change and grow,” she acknowledges, and she makes a conscious effort to "insert herself into different” music scenes in New York and elsewhere. For example, Frascoia has played with a bluegrass band in the city, although bluegrass is not a genre with which she had had much prior experience. As a composer, Frascoia helps singer-songwriters with their music, and she emphasizes that young graduates who would like to "make it” as musicians need to be both "positive and nice” to the people they interact with, since getting along with people is a key ingredient to success in a band or ensemble and on tour, and that they should "be out listening to live music” so that they can hear genres and styles that are new to them.

One of her former teachers, an ethnomusicologist named Jacob Edgar, also from Vermont, is the host of a PBS show called "Music Voyager,” in which he travels the world to find musicians who may not be known internationally, but should be appreciated by a wider audience. Frascoia, who goes by "elizabeth!” professionally, has taken her own voyage in music. She has taught a month-long workshop in Ecuador with a fellow musician from New York and she has been able to grow through her local journeys as a member of various bands and ensembles in the New York area. Her second album, BRAINCHILDREN, was released last year and this brunette singer, trombone player and teacher, who wants to inspire young people to challenge themselves and follow their musical passions, seems to have created a path for herself by pursuing what she loves. She has been connecting with musicians in both New York and in Los Angeles, where she lived last year with her husband who worked as a psychiatry resident there, and she has toured internationally. What is the next step in her professional trajectory? Frascoia seems optimistic that the opportunities will arise through the network that she has cultivated and through musicians she will meet and perform with in the future. She says that she does have some routine and some touchstones in her life as a freelance performer, musician and teacher, and she likes the varied rhythm to her days and weeks.

"Joy is believing in yourself and following your dreams,” states Prescilla, a middle school student who will graduate in 2015 from the school where Frascoia teaches her music classes. This quotation is located front and center on the school’s website and it seems that one of the messages that elizabeth! is trying to teach her students is getting through. Let’s hope that the students do not lose this youthful enthusiasm and see that, like elizabeth!, even in adulthood, it is important to believe in oneself and work to create a path that allows one’s innate talent to be seen – and heard!