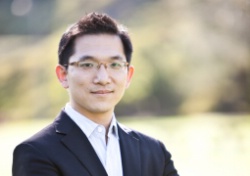 Jay Chen '00 has been getting by on very little sleep lately. Running for Congress is a "marathon, not a sprint,” he says. Chen, who is the current president of the Hacienda-La Puente School Board, decided to run for the congressional seat when a redistricting process changed the configuration of this Los Angeles district where he has lived for much of his life. Chen will face Republican incumbent, Ed Royce, in the opening primary this coming Tuesday as well as D’Marie Mulattieri, who is not affiliated with a political party. Royce has been representing the district for two decades and Chen, in fact, once worked in his office in Washington, D.C. as an intern. Now, however, he decided that it is time to take on the veteran since a redistricting process changed the demographics of the voting population in way that favors Chen, and, of course, Chen believes that Royce’s decisions are hurting the district rather than moving it forward.

One of the living people Chen most admires, Barack Obama, illustrates how a person "can rise above everything, even having grown up in a single-parent household, to achieve his dream,” he states. It is an "American story,” Chen continues.

Chen says that Harvard introduced him to "passionate people” and he believes that he has a responsibility towards society as the result of having attended such an elite university. He runs his own real estate business and as a result of his work on the school board, Chen believes that education needs to continue to be a priority for his district. Chen has helped implement a curriculum in one of his district’s elementary schools in which children are taught in Mandarin in the morning and English in the afternoon and there is a waiting list to get into the school in spite of the fact that most of the parents are Latino and not of Asian origin. He has also overseen a program in which individuals who are interested in applying to college learn the ins-and-out of the college application at no charge. Finally, Chen is concerned that American students spend less time in the classroom than students in other nations and he would like to see if it might be possible to change this lack of classroom time in the future.

Politics is a responsibility, according to Chen, who honed his political skills first at Harvard as president of the Asian American Students Association and as a member of Harvard Model Congress. "Convincing people” that he could run and win this district as well as fundraising have been the most difficult challenges for Chen thus far. He strengthened his business acumen at Bain & Co. in San Francisco after college and his leadership skills have been further developed by the U.S. Navy, for which he is a reserve officer. In addition to speaking Mandarin fluently, Chen also speaks fluent Spanish, which aids him when he communicates to members of his overwhelmingly Latino district. A Social Studies concentrator at Harvard, Chen also earned a certificate in Latin American Studies, and he took off one year to travel in Central and South America during college, an experience that allows him to understand the issues that many of his constituents face in their countries of origin.

Finally, Chen, who was born in Kalamazoo, Michigan, and who lived with his parents and older brother in Singapore before the family moved to Los Angeles, says that part of his childhood included Chinese school and Sunday school on the weekends. His parents, Taiwanese immigrants who came to the United States when Chen’s father decided to study at Wharton for a PhD in Mathematics, have inculcated the value of hard work in Chen and in his older brother, who also attended Harvard. Newly married, Chen and his wife would like to open a restaurant one day – he spent seven months attending culinary school in the evenings and French cuisine is his specialty – but right now public service inspires him more than cooking. A career path that Chen once thought he might pursue – that of a comic book artist – if he is lucky, will have a role in his life once again. All politicians, once elected, can be certain that some "doodler” will draw them if they become well known. On June 5th, Chen will find out whether or not he is closer to having flattering or unflattering likenesses of himself created by illustrators who will incorporate his face into their political cartoons. If he is lucky, he will be able to start collecting these caricatures for his own office in Washington.