Baratunde Thurston '99 (Author and Comedian, HOW TO BE BLACK) 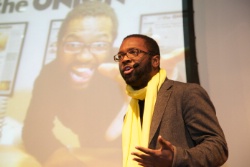 Baratunde Thurston ’99 is an overnight success that took ten years, and he attributes this achievement to the fact that "I was the best, just amazing—the best blogger, the best writer, the best comedian. So that’s my advice: just be the best.”

If that’s his professional bucket list, then Thurston’s about ready for early retirement.

Fortunately for us, he "very much want[s] to know the world”—a drive that keeps him constantly generating creative content as a writer, comedian, political activist, guest speaker, Twitter personality, technology nut, and all-around awesome human being.

At Harvard, Thurston chose to concentrate in Philosophy purely because it was fun, a decision that he calls "another example of liberated thinking.” Math and science had always been his academic strengths, and he initially envisioned himself a career in "something really geeky.” However, alumni whom Thurston encountered as a Reunions worker told him that one’s concentration at Harvard ultimately does not matter.

"The study of philosophy really helped me do what I do. The philosophy student tries to understand complex, old ideas, so whether you’re watching Rick Perry or the president talk, your mind is a little better trained to pick through the words and define the meaning. For any artist, part of your job is to interpret the world through your art.”

Thurston does his job thoroughly, and his output is diverse, spanning print, stand-up comedy, television, social media, and more. He co-founded Jack & Jill Politics, a black political blog; has written for Huffington Post, Vanity Fair, and the UK Independent; and has appeared on CNN, MSNBC, BBC, Al Jazeera English, THIS WEEK IN TECH, as well as his own show, Popular Science’s FUTURE OF.

"No one grows up wanting to be a strategy consultant unless they have extreme psychological problems,” he quips, "but it served a purpose, used my brain, paid off my loans. I had this notion that I would do consulting and make money until I had the financial independence that would give me the right to pursue art.”

One year into consulting, his then-girlfriend encouraged him to pursue his artistic ambitions instead. Although Thurston did not quit his consulting job, he began writing, blogging, and doing stand-up comedy. Thurston’s juggling act between consulting and creativity continued for seven years, and "eventually, the balance shifted so consulting became more of the thing on the side. This is where the pragmatism and creativity overlapped.”

In 2004, Thurston switched from full-time consulting to contractor status, a distinction he deems important because it marked that consulting—despite the benefits and financial security it afforded—was not his intended career path.

"Clinging to corporate life was too damaging to my creative life. The money was too easy, and it was creating bad incentives.” To physically detach himself from his consulting position’s demands, Thurston moved to New York, and within only a few months, he obtained the position at The Onion.

Since then, Thurston has worked extremely hard and cultivated a unique presence in comedy, politics, and journalism, especially online. During the swine flu epidemic, for example, Thurston created a Twitter account for a pig that spreads the disease across the world (@the_swine_flu). His own Twitter account (@baratunde), which he considers a "performance art space,” offers political insight, commentary on current events, and updated information about his comedy shows, television appearances, and upcoming projects.

Lately, Thurston’s Twitter and Facebook accounts have been buzzing about his latest book, HOW TO BE BLACK, available for purchase this month. HOW TO BE BLACK—which has already garnered excellent reviews from Publishers Weekly and MSNBC host Melissa Harris-Perry—unleashes valuable information to meet "every reader’s blackness needs,” according to a press release. However, Thurston envisions HOW TO BE BLACK taking on a life of its own as an ongoing project.

"The book is beyond blackness and goes to the question of identity. We are of a generation, a technological time, when our ability to be closer to who we are is probably higher than it’s ever been in all of human history. Previously your identity was wrapped in your flag or your tribe, and now more recently, declared by media institutions. Those central authorities of identity message are collapsing, and now we’ve got all this ego that has the ability to express itself.”

He continues, "In an age where we have a greater power to be who we are, this book is a signal of that shift. I want to allow it to become a platform for all kinds of people to talk about identity. We are all contending with who we are.”

Thurston will expand this dialogue about identity to include other perspectives through television, additional books, blog posts, and online at http://howtobeblack.tumblr.com/.

Employing technology as a platform for self-expression is extraordinarily important to Thurston, partially due to his early exposure to computers and the Internet. Thurston’s mother, a deeply influential figure in his life, was a computer programmer, so his household was the first in his Washington, DC neighborhood to have a computer and the first to go online. In addition, he attended Sidwell Friends School, one of the first secondary schools in the United States to enjoy a dedicated, high-speed Internet connection.

Likewise, the world very much wants to know Thurston because his creative work not only entertains, but also offers insightful political and social commentary.

These interests are rooted in Thurston’s own family history and upbringing in Washington, DC, as well as in his "unfortunate position of caring” about race, politics, and satirical journalism, to name but a few issues he explores constantly. His maternal grandmother was the first black person employed at the U.S. Supreme Court, and Thurston’s mother was a Civil Rights activist. Her accomplishments cultivated in Thurston an appreciation for his rich heritage, awareness of and engagement in political activism, and the fortitude to grapple with racism.

"You can face racism, counter it, and challenge it without the ego hit, without the crisis of self-confidence that often befalls minorities. The cancer of racism is that it creates doubt about yourself and about others’ intentions and motivations.”

Part of Thurston’s success—in addition to ten years of "unhealthy levels of work”—is adhering to his own intentions and motivations.

"I stayed true to myself and weighed in on things that I care about, things that I know about and am curious about, instead of trying to be someone I think people want. People smell your real-ness, and even if they don’t agree with you, they still respect you.”

Those ten years of work were crucial. Musing over the roots of his unique career, Thurston says, "All of those efforts that were years in the making have paid off. What’s interesting is that everything I did at Harvard—I did The Crimson, The Computer Society, I did the black stuff, I did theater, and I worked many jobs—everything I’m doing now essentially got its start at Harvard.”

Yet Thurston warns that graduating from Harvard or a similar college can discourage one from exploring less conventional careers.

"One of the tragedies of being educated at a place like Harvard is that people often do non-creative things with that platform. You get these great minds and all of these super-motivated people, obviously lots of talent, and then a handful of industries just exploit the shit out of them and make them believe they’re worth your creativity.”

Thurston finds the creative business worthy of his mind and efforts because of what he modestly calls the "once-every-ten-years moment,” though he’s certainly had more than one.

"I like those moments when I feel 100% satisfied with what I’ve put out into the world, and in turn, the world responds in a way that says, ‘Yes. We agree with you. You have said it.’ I wish it happened every time I opened my mouth, but then I would be a wizard, and that’s a whole other line of work.”

Off the cuff, Baratunde Thurston is effortlessly funny and eloquent, unabashedly frank and genuine. HOW TO BE BLACK is just as engaging and hilarious as its author—and for those concerned about having to be black to purchase it, get the book online because Amazon.com won’t find out you’re actually a Smurf.