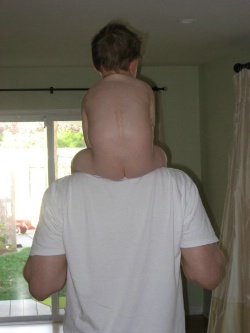 "I have attempted to pursue the truth with some diligence and to report it,” states Edward R. Murrow, the legendary newsman and subject of the film, GOOD NIGHT AND GOOD LUCK. Chris Salvaterra ’90, former Harvard varsity football player and now a producer at Katonah Pictures (named after his hometown) helped to bring GOOD NIGHT AND GOOD LUCK to American and international audiences. Regarding movie scripts, he says that "I hope that if I am moved by the writing, others will be too.”

AMERICAN PIE, SYRIANA, THE VISITOR, LADDER 49, FAST FOOD NATION, and HIDALGO are just some of the other films that Salvaterra has worked on over the course of his career. "It was a real challenge, and it was difficult to know what the best path was,” he acknowledges, when asked about his early years in Los Angeles. When all his "suit-clad roommates trudged off to interviews with Goldman Sachs,” Salvaterra was immersed, "like an idiot,” as he describes himself, "in a book about scriptwriting.” He says he is hard-pressed to define anything in his life as a "huge obstacle,” but that "professionally, choosing a difficult business that can easily chew people up and spit them out has been challenging.”

Salvaterra knew very little about how the business operated when he first started working in Hollywood and didn’t know where to turn if he had questions. He would tell those considering careers in entertainment that the glamour will not be enough to sustain them on a daily basis. "Make sure that you are doing it because you love whatever it is you want to do…you’ve got to love the process so much that you can take the ups and downs that you’ll inevitably experience,” he emphasizes, adding that his wife, Marjorie, a writer, recently asked him what he would be doing with his life if money were not an issue and he replied, "‘This.’ I mean it – I love it.”

The son of a physical education teacher and dance instructor, he recalls an All-American childhood filled with pick-up baseball games in the suburb of New York City where he grew up. He says he learned the importance of basic decency and respect for others from his parents and that his maternal grandfather’s influence on his life was also enormous. "I have a shrine to him in my office,” Salvaterra says. A member of the Greatest Generation, his grandfather, who died at 103 years of age, was an advertising executive in Manhattan. The dignity and intelligence that characterized the personal and professional life of his grandfather are qualities that he believes remain important, even in the hypercompetitive environment of the 21st-century entertainment industry.

"Happy and content…but not satisfied” is how this Hollywood producer describes his current state of mind. He relishes the moments that he can fit in a workout, watch the Jets, or get together with some of his friends from his football-playing days, but the main focus of his life is raising his children, Lulu, 5, and Oliver, 7, with his wife.

Salvaterra’s favorite writers include Vladamir Nabokov and F. Scott Fitzgerald and when reviewing scripts (he has read over ten thousand) he prefers "stories that are about something – emotionally, not plot-wise.” STAR WARS, E.T., RAIDERS OF THE LOST ARK, THE COSBY SHOW and CHEERS are films and TV shows that made an impact on him when he was younger and Salvaterra feels both grateful and inspired to be able to help create entertainment experiences. "I love it,” he says, "but I also take it very seriously – I think that, as a business that exports popular culture, we have a moral and ethical responsibility to provide the best possible entertainment.”

Channeling Murrow? Perhaps. "This instrument can teach,” Edward R. Murrow tells those attending a dinner in his honor in the film, "otherwise it is merely wires and lights in a box.”

When asked which living person he most admires, Salvaterra answers, "Bruce Springstreen. He is living his bliss, has captivated millions and still stayed true to himself. And, I hear that he’s an incredibly nice guy.” Could this description also be appropriate for one of the fans of "The Boss,” as well?