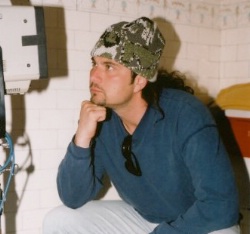 Tom Brady '86: When Adam Sandler called and said "I just wrote a new script, do you want to direct it, my instinctive answer was ‘hell yes!’”

It’s been quite a journey for Harvard’s Tom Brady ("Just don’t confuse me with the quarterback – I’m clearly the more handsome and athletic one”), a kid from the backstreets of Bayonne, New Jersey.

"I had a snarky sense of humor, which helped me survive elementary and high school,” Tom says. He realized early that he wanted to be a writer.

"I wrote as a way to escape, and found that I was naturally drawn to comedic material like Monty Python, Woody Allen and Steve Martin. As the high school paper’s sports editor, I once wrote a vicious, satirical piece about the football team with no thought to the fact that they were all going to read it and want to kill me. I was barely able to talk my way out of that one. I learned some early lessons about being too sarcastic and knowing my audience.”

Bayonne High School didn’t incubate many Ivy Leaguers. "I had one of those great, Welcome Back Kotter / Dead Poets’ Society teachers, Mr. Linn, a Harvard grad who made it his life’s mission to find diamonds-in-the-rough in my crazy public high school,” Tom says. "He grabbed hold of me around sophomore year and said he’d seen some of my writing. He said ‘Hey, if you straighten out and do what you’re supposed to do, maybe you can get into a decent school.’ He gave me a kick in the ass just when I needed it.”

Tom blossomed at Harvard. "I was determined to be the great American novelist and immersed myself in all kinds of literature. As a joke I went to an audition for a play with my roommate. To my surprise, I got the lead opposite Amy Brenneman ‘86. The play was developed from a Kurt Vonnegut novel and there was a lot of improv--and nudity. It was a life-changing experience. After that, everything for me was about writing, producing, directing and acting in plays.”

After graduation, Tom was waitlisted at Yale for the directing program, and wasn’t ready to commit to a film program. "As a lark, I applied to the University of Hawaii theatre program,” Tom says. "To my surprise, a former Yale theater professor was chairing that department, and he said ‘Aloha. Come on out here. We’ll get you a job and a place to live, and you can produce anything you want to.’ It was too tempting to turn down.

"In Hawaii, I played the lead in all the Shakespeare plays, continued writing and directing, and did a few professional shows that toured the islands. Meanwhile, friends of mine had moved to L.A. and were becoming junior agents or landing development jobs. They said ‘you’re doing great work, but we can’t come out there and see it and nobody else will either.’

"That’s when I got a small acting role on the CBS Vietnam show TOUR OF DUTY, which was filming in Hawaii. I was also doing A MIDSUMMER NIGHT'S DREAM at the University, and had the time of my life, filming all day in the mud in the jungle with machine guns then racing across the island to do Shakespeare at night. I had never been more creatively engaged, and that was when I realized I needed to move to L.A.

"I had a lot of different jobs, including working as assistant director at The Mark Taper Forum,” Tom recalls, "and the whole time I was writing on the side. When I turned my attention to spec tv scripts, that’s when I started getting incredible feedback.

"My big break came when Al Jean ‘81 and Mike Reiss ’81 called from THE SIMPSONS. They were some of the last show runners in town who read unsolicited submissions. They called me out of the blue one day and said ‘hey, this is really funny stuff, we want to meet you.’

"I started writing on THE CRITIC. It was the grunge era and I had long hair down the middle of my back--they thought I was sort of a guy off the street. One time they were telling a Harvard Yard story and when I chimed in, they looked at me like I was crazy. They had hired me based on my work, and had no idea I had also gone to Harvard.”

In addition to those shows, Tom wrote for several other TV shows, including SPORTS NIGHT, and MEN BEHAVING BADLY, starring Rob Schneider. "That show lasted two seasons, and when it was done, I told Rob, ‘I’ve got movie ideas you,’” Tom says. One had Schneider playing an unlikely male gigolo (DEUCE BIGELOW), and another was based on Tom’s Harvard honors thesis ("The Human Animal”) and an article his wife found about heart transplants from pigs--it became the comedy THE ANIMAL, which Tom wrote and co-produced. Next, Tom wrote and directed THE HOT CHICK, also starring Rob Schneider.

Adam Sandler’s Happy Madison Productions was behind all of those films. "Happy Madison is kind of like a big family,” Tom says. "You live outside the rules of mainstream critics and try to do something that makes you laugh.” Which brings us to the script Adam Sandler had called Tom about -- BUCKY LARSON: BORN TO BE A STAR.

"It was written by Adam and Nick Swardson as a starring vehicle for Nick,” Tom says. "It was edgy and silly and bold, but sometimes those things break through and are big hits.

"We all knew we were taking a risk with the subject matter and kept the budget tiny by studio standards ($9M). The experience of making the movie was fantastic, but as sometimes happens, there were marketing and scheduling challenges that were beyond my control as a filmmaker, and the movie underperformed. But working with Nick, Christina Ricci, Don Johnson, Stephen Dorf, and Kevin Nealon was a dream. Despite the goofy premise, the acting is truthful and the cinematography is inspired. I’m confident people will ultimately discover that BUCKY is a much better film than they thought, and like other low budget Happy Madison comedies, it will go on to become a college cult film with huge DVD sales.”

For the last year and a half, all of Tom's energy has gone into MTV’s GOOD VIBES, the new animated series for which he’s the head writer. It’s about two Superbad-type buddies trying to find their way in a California beach town.

"It’s a return to my first love—prime-time animation. I’ve never worked on anything that I’ve been more invested in or proud of,” Tom says. "The central character is from Bayonne, my home town, and has a young, single mom like mine. This show captures so much of what I’m about, and I’m able to draw on all my experiences from the Jersey shore to the beaches of Hawaii, Venice and Malibu. Sensibility-wise, it’s a chance to build on the kind of work I did on animated shows like THIS SIMPSONS and THE CRITIC--sharp jokes, social and political commentary, and sneaky heart--and then to make it something new, visually arresting and cinematic. Every once in million the right combination of talent, material and timing just line up. GOOD VIBES is one of those special projects.”

Remembering how he got his first break, Tom tries to read all the material he receives--and the current writing staff for VIBES is made up of talented first-timers. When asked how he would advise aspiring writers and directors, Tom says, "At least when you’re getting started, you need to be specific about your interests and preferred genres. I also think you need to live in L.A., which involves a lot of pain and adjusting not only to survive here but to be happy enough that you can write from a secure place. And never give up. Keep working toward your vision – and when that fails, adjust your vision and start all over again.”