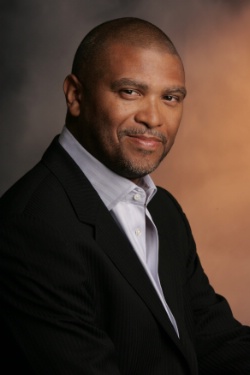 Growing up in East St. Louis, IL, Reginald Hudlin '83 found his story-telling voice early. "I wanted to do a parody of THE SIX MILLION DOLLAR MAN called The Six Dollar and Forty-Nine Cent Man,” he says. "My aspirations weren’t necessarily high art at that time, I just wanted to do something funny and cool.”

He and his brothers were major comic book collectors and movie buffs. "Even before the term "independent” was really popular, I was always aware of other types of movies,” Reginald says. "We loved martial arts, so we were watching movies by Kurosawa long before most folks in the Midwest knew who he was.”

"I wasn’t even in high school, and I kept telling my brother Warrington, who was studying film in college, my film ideas. Then one Christmas he gave me a notebook with blank pages and said, ‘Here, write down your ideas in this.’”

By the time Reginald left for Harvard, he knew he wanted to be a filmmaker. "I guess if there was a movie that was a turning point, it was TOMMY, the rock opera by The Who. The combination of music and visuals in the movie long before the birth of MTV really put a fire into me. I wanted to make a movie that looked like that with the music of George Clinton and Parliament Funkadelic.”

The 20-minute short film he wrote and directed for his senior thesis at Harvard won a Student Academy Award and was the basis of his first feature, HOUSE PARTY. "It goes back to that notebook my brother gave me,” Reginald says. "I had collected stories of funny things that happened to my siblings, my friends and myself, and was inspired by movies like RISKY BUSINESS, ANIMAL HOUSE, and AMERICAN GRAFFITI. I saw the huge culture shift with the rise of hip hop and thought, ‘you need to capture this.’” Made for around $2.5 million, HOUSE PARTY grossed $26.4 million domestically and led to three sequels, a Saturday morning animated series and a comic book.

Reginald was the first President of Entertainment at Black Entertainment Television. In addition to developing seventeen of the twenty top rated shows in the network’s history and the BET Hip Hop Awards & BET Honors franchises, he created a profitable home entertainment operation and rebuilt the news division. "I loved the scope of the job. I loved having the giant machine to do all this stuff with,” he says.

While he was BET’s chief programmer, Reginald also fulfilled a lifelong dream and wrote for Marvel’s BLACK PANTHER comic book series. Created in 1966 (predating the Black Panther Party), Black Panther was the first black superhero in mainstream comics, a character Reginald remembered from his childhood. "I always liked the character but I was frustrated with his depiction,” Reginald says. "Black Panther wasn’t pivotal enough in storylines.” What was planned as a six-issue assignment turned into a four-year stint as a comics writer. "Objectively that’s a money-losing proposition,” Reggie says, "but I had a lot of fun and it led to me doing an animated series based on the comic book, which led to a bunch of other opportunities in animation. At the end of the day, if I do something I’m passionate about, no matter how far-fetched or unlikely, it tends to make money.”

Reginald’s television credits include directing episodes of THE BERNIE MAC SHOW, MODERN FAMILY, THE OFFICE, THE MIDDLE, and PSYCH. He was also the executive producer of THE BOONDOCKS.

Having worked as a writer, director, producer and executive, Reginald acknowledges having a big appetite. "There are always several projects in the works,” Reginald says, "but my main focus right now is DJANGO UNCHAINED,” the Quentin Tarantino film in pre-production. His involvement started with a conversation the two men had years ago.

"I said I wanted to see a film about the American slave experience that was like Spartacus, or Braveheart, and Quentin was excited by that notion. I didn’t know he was planning to actually act on it,” Reginald recalls. "Years later he shows up with this script and says, ‘you planted the seed and this is the tree, so you have to get on board.’”

"It’s great when you can do what you love in your business, and that’s what DJANGO UNCHAINED is,” he says. "Whether we’re out scouting plantations, or looking at which pistol to use or talking through the political implications of certain plot twists, that all falls in the category of getting the movie made. We’re having fun, whistling as we work every day.”

Reginald has some advice for aspiring screenwriters and directors. "Read books and screenplays. Learn to discern what a good or bad script is. You’ll be surprised at how much you can learn—you can’t read enough scripts.”

"If you want to be a director, make sure you’re living life,” he adds. "There are too many movies about movies. People should look out in the world and ask what’s going on in society that’s screaming to be talked about. If that subject resonates with what’s going on in your life, then that’s what you need to make a movie about.”