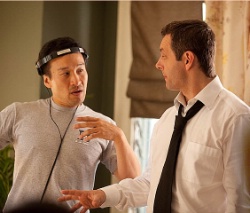 Shawn Ku’s new film, BEAUTIFUL BOY, tells the story of a couple in a failed marriage who must turn to each other at a time of unimaginable trauma. "At first glance this movie appears to be about tragedy, but I think it’s actually a story of hope,” Shawn says.

How did a pre-med Chemistry major end up in Hollywood? The plan was for Shawn to enter a 6-year combined college and medical program, as his sister had. "It was eating away at the back of my mind—I wasn’t sure I wanted to be in medicine,” Shawn says. "I decided to go to Harvard instead and there was a huge, huge war in my house. It wasn’t the agreed-upon trajectory.”

At Harvard, Shawn was introduced to modern dance. "This girl downstairs was a dancer and she said we should audition for a dance group,” he explains. "She didn’t get in, but they took me because guys are so rare. I was completely green so it was a little frustrating, but I guess I had a knack for it. After that I started taking dance class in Boston.”

Shawn moved to New York to go to Columbia Medical School but his heart wasn’t in it. When he asked Columbia for a third deferral, Shawn recalls, "they were like, ‘uh, no’.” He continued dancing and modern dance led him to the world of musical theater.

Shawn danced in such shows as FOSSE, MISS SAIGON, and THE KING AND I, but found that he preferred working behind the scenes. "There were a lot of Broadway community events and I was always the one putting them together--conceiving, directing and, to a certain extent, choreographing them,” Shawn says. "I always liked that much more than being on stage.”

A truly bad art house film put Shawn on the road to film-making. "A friend and I went to see this terrible film. I walked out thinking ‘I can’t believe someone put a million dollars into making that movie. We could write something at least as bad as that.’ So the two of us wrote a script.”

Shawn gave the script to his talent agent, who was also a literary agent. "He gave us notes and we did some re-writes,” Shawn says. "Pretty soon we found ourselves meeting with a producer and director and it looked like they were going to make the movie.”

The movie wasn’t made, but Shawn decided to learn more about the film world. "I became a production assistant on one of my agent’s other client’s films and rose up the ladder to become a second second Assistant Director,” he says. Making a clean break from the New York theater scene, Shawn enrolled at USC Film School. He put his Broadway experience to good use when it was time to do his thesis film. "They encourage you to write what you know, so I decided to do a musical.” The short film, PRETTY DEAD GIRL, is a musical retelling of Romeo & Juliet in which a necrophiliac finally learns to love a woman who’s alive. "It’s quirky, a little edgy,” Shawn allows.

The film won awards at film festivals around the world and was selected for the Sundance Film Festival. "The producers, talent and everyone in the crew put a lot of energy into the Sundance experience,” Shawn says. "Every morning we went around in the freezing cold putting up posters. We made toe tags with the screening times and handed them out to get people to go see the film. By the time we got to the later screenings, I felt like we had a bit of a cult following. It was crazy.”

The film made a big splash. "I was wooed by every agency there was and talent law firms and managers--it was overwhelming,” Shawn says. "I would have been completely conceited to have expected that.” PRETTY DEAD GIRL is currently being developed into a full-length stage production.

After USC, Shawn directed and co-choreographed THE AMERICAN MALL, an MTV musical film for which he received a DGA Award nomination. He then fielded offers to direct light comedies, musicals, and youth-oriented fare, but they didn’t interest him. "I wanted to do something small,” says Shawn, "something that would tap into the darker side of my nature.” That evolved into BEAUTIFUL BOY, Shawn’s second screenplay with his writing partner Michael Armbruster (HBS ’94).

"I like writing with a partner because there’s that friction, Shawn explains. "If I believe something and he believes something different, I have to fight for it. I’ll either convince him that I’m right or convince myself that I’m wrong. There’s a trust that nothing is personal and that we both have the same goal, which is to write the best story we can.”

They were working on a script about a couple in a seemingly perfect relationship when the Virginia Tech killings happened. "My sister called me immediately,” Shawn says. "Our parents had met and married at Virginia Tech. My sister was born there. And add to that the fact that the shooter was Asian…though we suffered no direct loss from the incident, my family was rocked.

"Mike’s and my script took a turn. We decided to use a campus shooting and yet write nothing about it. The script would be the story of two people we rarely empathize with in such a circumstance—two people who more often than not get the brunt of the blame for the tragedy: the killer’s parents.”

Shawn had always pictured actors Maria Bello and Michael Sheen as the parents. "I just had a feeling that their unexpected pairing would be magical,” he says. "I prepared myself for what I assumed would be a hardcore pitch to convince Maria to do the movie and trust this novice director. But once we sat down, the first thing she said was, ‘So when are we gonna make this movie?’ She was in.

"The same was true for Michael. We got on the phone together—very, very late one night—and we had an instantly deep conversation about life and self-esteem and societal pressures. It was clear that he had already begun to envision himself in the role.”

Shawn, who describes his tastes as "slightly to the left of mainstream,” has several new scripts in the pipeline. "It’s kind of a turtle race to see who crosses the finish line and gets financed first,” he says.

When asked what he would say to aspiring screenwriters and directors, Shawn offers this advice: "Chasing fads is not the way to go—you always look like an also-ran. The artistic compromises make the whole experience less than satisfying. If you’re an artist, why aren’t you exploring your voice? Everyone has something to say. You should tell the stories that resonate within you.

"I’ve had to assess whether my personal goal is to be rich or famous or what. As long as I have money to put food on the table, I’d rather be telling the stories I want to tell.”

For more information about BEAUTIFUL BOY, go to http://www.beautifulboythemovie.com.