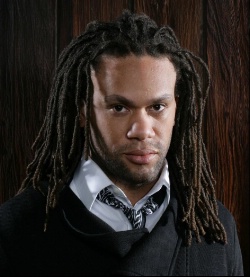 What is a self-described "wild card with dreadlocks" who wrote his Social Studies thesis on slam poetry and its relation to liberal democratic theory doing in Hollywood? The answer is that Franklin Leonard '00 is on a quest to find and produce great scripts. Leonard is known primarily for "The Black List," which was first officially released in 2005 (http://blcklst.com), but which began as an email that he sent to his friends and fellow young executives in Hollywood in 2004 when he was searching for unproduced gems. The name of this list, which evokes images of "blackness" (Franklin is African-American) and, of course, the Black List of the McCarthy era, has branded Leonard "as an executive who cares about great writing," he explains.

It has helped to catapult scripts like Diablo Cody's JUNO to prominence—the script eventually won an Oscar for Best Original Screenplay—and it has evolved to represent "the collective taste of the people who develop, produce, and release theatrical feature films in the Hollywood studio system and in the mainstream independent system,¨ according to its website. In short, "The Black List" has become a list on which screenwriters are honored to be included.

Leonard says the best movies are those that "sizzle, but where you also care about the characters.¨ But, what is Franklin Leonard´s own story? What was his path from Harvard to Hollywood? Growing up in Columbus, Georgia, a career in film was not, perhaps, the most obvious choice for him. As a child, Leonard played the violin and devoured books such as The Hardy Boys series. He describes himself as the "consummate nerd" at age sixteen when he participated in student government, the math team, and numerous other extra-curricular activities. A Social Studies concentrator and Dunster House resident for his sophomore through senior years at Harvard, Leonard continued to be involved in a myriad of activities as an undergraduate and The Institute of Politics, The Signet, The Political Review and The Advocate were all part of his college experience. The volume of reading and writing that Social Studies required was "extraordinary" in Leonard´s opinion and it provided good training for his later work as a reader and evaluator of film scripts. Harvard also gave what him a "very fast and rich education" socially, as he terms it, since it introduced him to worlds beyond the traditional Georgia background of his childhood. It was his parents´ life in the military that also shaped his experience—his father worked as a neonatologist for the Army—and Leonard´s parents encouraged their children to believe that nothing "was closed off" to them Franklin says. He calls his career a "rebellion against his upbringing,¨ but he acknowleges that his parents no longer bother him about going to law school.

Leonard, who recently left his job as the Development Director of Universal Pictures to join Will Smith's Overbrook Entertainment, honed his analytical skills as a consultant at McKinsey & Company before he found success in Hollywood. He sharpened his political skills as the communications director of a congressional campaign and his writing skills working as a journalist for The Trinidad Guardian in Port of Spain, Trinidad all before taking on the challenge of "the Business." He has worked for Leonardo DiCaprio's production company, for former Paramount Pictures president John Goldwyn and for Mirage Enterprises (the production company run by Sydney Pollack and Anthony Minghella when both were alive).

Franklin prefers film to television because he believes there is something special about the "shared entertainment of going to a theater," and he describes his current state of mind as "energized." He allows that some may consider the work he does frivolous, and admits that the people whom he truly admires are those who are out there "changing the world," such as the protesters in Egypt who were demanding democracy in the streets the day we spoke. He admires writers such as Aaron Sorkin, who just won the 2011 Oscar for Best Adapted Screenplay for THE SOCIAL NETWORK, and David Simon, writer of acclaimed TV series, THE WIRE, perhaps because in addition to nuanced characters and intelligent dialogue, both seem concerned with larger social problems that exist in the world. At Will Smith´s company, Leonard will be focusing on commercial, blockbuster films, such as the recently announced project to remake "Annie" for a new generation, and he looks forward to working with Smith on other exciting projects.

Outside of finding great scripts, Leonard is passionate about soccer, a sport that his younger brother plays professionally, and one he says he watches "a lot." Although Leonard's talent of finding great writers and his ability to work with both writers and directors has gained recognition within the industry, it is clear that even greater challenges and opportunities await in the future. Whatever the future holds, undoubtedly our experience in the cinemas as viewers—the "shared entertainment" that Franklin Leonard sees as a particularly special aspect of culture and society—will be richer as a result of his efforts.