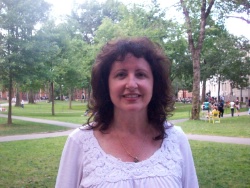 Television writer and producer Thania St. John (née Papas) ’83 knew her calling even when she was "a little person,” avidly watching as many television shows as she could digest.

"I would make people rehearse during recess and bring costumes in, and the teachers would ask, ‘What’s this?’ And I would say, ‘We’re putting on a show!’”

Putting on a show is what St. John still does today. She has worked as writer and producer for a number of successful, widely acclaimed television series, including LIFE GOES ON, LOIS AND CLARK, and ROSWELL, to the more recent HUFF, EUREKA, DROP DEAD DIVA, and UNNATURAL HISTORY.

St. John, a native Chicagoan and graduate of The Latin School, first became involved in theater productions. At the time, existing camera technology and Chicago’s film scene did not allow her to explore her passion for film otherwise.

"We didn’t even have video cameras to make our own films, so theater was really the place to learn how to be in show business if you were that young. The entertainment business wasn’t as global as it is today, and there was no outlet in Chicago.”

She continued to pursue her interest in show business at Harvard. A former Matherite, St. John graduated in 1983 as a dual concentrator in History and Visual & Environmental Studies, with an emphasis on filmmaking. During Commencement week, St. John was featured on the cover of the Crimson for having one of the most interesting senior thesis topics. She wrote about how women’s roles during the Depression Era evolved to become stronger and more independent figures, focusing on five films and their heroines.

St. John jokes, "The number of spelling errors in my thesis was atrocious.”

Regarding her experience at Harvard, however, St. John adopts a more serious tone, which conveys how highly she values education in the process of becoming an entertainer and writer. She was originally admitted to the Class of 1984 but opted to take sophomore standing in her first year. St. John’s high school love of history led her to declare this as her concentration during freshman week, but she realized that adding VES as a dual concentration would match her true professional goals more closely.

Ultimately, she focused upon receiving the best possible education.

"You need to know a lot of things to be smart before you can entertain people. No matter what you want to do, get really smart first.”

St. John speaks warmly of Harvard’s VES Department, pointing out such faculty members as Ed Pincus and Alfred Guzzetti, whom she describes as "true leaders in their time of cinema vérité.”

"I learned a tremendous amount from them about how to get into a story in a non-traditional way and still tell it linearly.”

But St. John’s interest in television and film veered toward traditional Hollywood. Directly after college, she expanded her foundation of knowledge at UCLA, where she earned a master’s degree in Film and Television Production.

"My famous line was, ‘I need to go to film school so I can learn to use a tripod.’ If you want to be a fisherman, you don’t move to Kansas. You have to be where the business is, where you can actually do your job.”

Early on, St. John recognized her desire to work in television, not only because she had always loved hour-long series as a child. She did not subscribe to the mentality that "film is art, television is commerce.”

She also gravitated toward television because of the autonomy it affords the writer—the ability not only to craft the script, but also to oversee its translation onto the screen while maintaining her original vision. According to St. John, the roles of the television writer and producer are inextricably intertwined.

"The writer stays with the show, the creator, the executive producer. The writers on staff, they shape the show; the show is theirs. TV is amazing because you automatically become a producer when you become part of the writing staff.”

St. John acknowledges her less glamorous beginning in the industry, humorously describing her first position as a production assistant. Her first task: cleaning out a moldy refrigerator. Later, her spec script for THE EQUALIZER led to her first writing job on MIDNIGHT CALLER, an NBC series that ran for three seasons.

Throughout St. John’s career, she has written and produced episodes for a number of shows that feature science fiction or otherworld elements, such as Roswell and Eureka. "I think you can do a lot in sci-fi as a writer. You can use so much metaphor and have a lot of license, poetic and creative, when you’re talking about stuff that isn’t quite real. It’s very liberating and allows you to use your imagination.”

In addition to St. John’s obvious love for her work, her Hollywood career has been sustained by her constant creative drive. She describes the importance of having a "spare mind to think about a new idea, even when I’m working on another current project. The noodling process is just as important as sitting down in front of a blank computer screen.”

However, the two most crucial aspects of succeeding in Hollywood, St. John contends, are true talent and maintaining relationships.

"It’s a balance of being able to do what you want to do well, and making sure that you stay in constant contact, that you make the friends you need to make along the way.”

Just as passionately as St. John hones her craft, she cultivates relationships with writers and other colleagues in the film industry. During the 2007-08 writers’ strike, St. John collaborated with Charlie Craig to create Why We Write, a blog featuring essays by established and aspiring writers to support their professional community.

In addition, she is President of the League of Hollywood Women Writers, also founded during the strike. This non-partisan political organization aims to preserve Internet neutrality and to ensure that information is disseminated in an open, unbiased manner.

St. John also came upon her current project, UNNATURAL HISTORY, through a personal friendship and professional relationship. Mike Werb, the creator of this new Cartoon Network series, was St. John’s classmate at UCLA.

"That’s a case of how your talent and your relationships have to match. I didn’t get the job because we were friends. He really liked all of my work, but the fact that we’d been friends made it so nice to work with someone where you automatically would have a connection.”

St. John is currently in Toronto, where UNNATURAL HISTORY is filmed, to wrap up post-production for the first season. This live-action series premiered in June 2010 and follows Henry Griffin, a high school student who solves historically based mysteries with the skills and knowledge he has acquired as a globe-trotter.

The show has been warmly received thus far, yet another accomplishment in St. John’s successful career in television.

For St. John, "it” first happened over twenty years ago and her momentum has not stopped since.