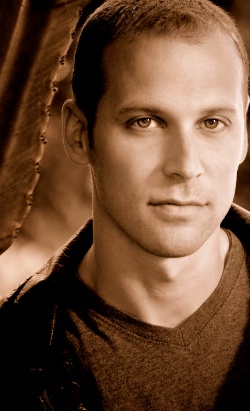 "I loved The Hardy Boys, The Three Investigators and Alfred Hitchcock books. I also watched a lot of Hitchcock movies. Later in life I liked plot-driven, highly structured stories that dealt with crime, death and deception. My masters degree was in Shakespearean tragedy.”

Gregg is now an internationally bestselling author of thrillers. Does his choice of dark themes reflect inner demons? "Maybe people need a dark thread in their personalities to be drawn to this kind of writing. But it’s been said that some of the most normal people are crime writers, and I wonder if it’s because of the lack of repression. What we deal with can get quite dark and you get a lot of that out of your system when you put it on the page.”

It’s not all murder and mayhem. "Moving across media has allowed me to play with different degrees of lightness and darkness. Novels are my first love, but I’m a writer/producer on ABC’s "V,” I’ve written screenplays, published academic work and I just wrote a Moon Knight-Spider Man crossover that’s like the old fashioned fun comic books of my childhood.”

Gregg went to Harvard with a clear plan. "I didn’t take classes in creative writing and never read a book on it. I chose my concentration (English and American Lit with a minor in Psychology) based on what I thought would be the best combination to bring to a career as a novelist. I actually started writing my first book, THE TOWER, the summer between junior and senior year of college, set it down to finish my thesis, then picked it up again and finished a rough draft the summer before I did my masters.”

"THE TOWER was my first big writing undertaking and I wrote draft after draft. By writing it I was learning how to write a novel. The end of each chapter was clearly better than the beginning. I got to the end of the book and saw it was still a giant mess so I had to take the whole thing apart, look at all the pieces, and put it back together again.”

Gregg had done an internship with a film producer when he first started writing THE TOWER. "As an intern I was reading and writing coverage of scripts, building relationships and making contacts. When I finished THE TOWER, a producer at the film company got the manuscript to Night Shyamalan’s attorney. The lawyer loved it, flew me to New York, and got me an agent who promptly sold it to Simon & Schuster. I was very fortunate to have a book deal from a pretty early age: it has allowed me to work on the projects that are the most stimulating and exciting to me.”

Does Gregg set boundaries in his search for authenticity and excitement? "I think if I weren’t interested in new people and new places and thrills, then what would I be doing as a writer and a thriller author? When I’m pursing something, I have a pretty intense focus on it and I’m not thinking about what’s dangerous and what isn’t. It’s like an athletic event--you’re playing the game, not worrying about getting injured. I tend to err on the side of adventure and fun rather than personal safety.” During a Russian book tour, Gregg’s request to see the "real Moscow” lead to an underground bar and a confrontation with some rather large former soldiers. "That was the one time when I thought I might actually die. Fortunately my translator and I managed to escape before more of their friends could show up.”

Some authors don’t like promoting their work—not Gregg. "I write to be read--my books and comics are commercial. I enjoy interacting with readers and fans, and I’m really looking forward to getting out and talking about THEY’RE WATCHING.” At his July 15th Harvardwood Seminar Series appearance and elsewhere, Gregg will more than likely be asked if he has any advice for aspiring writers. "The biggest advice I have is fairly banal: you have to keep writing. I meet a ton of people who say they want to be writers but I meet very few who actually want to write. A lot of people want to know how to get a publisher, editor or agent, but especially in the early days the focus has to be on the work—turning off the internet, the phone and the doorbell and concentrating on the blank page.”