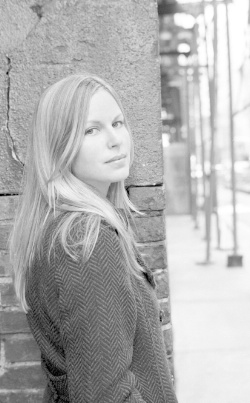 Ceridwen Dovey. The name makes you do a double take, but the person makes you glad you did. Cheerful, bold, and adventurous, Ceridwen Dovey’s personality is as colorful as her life story. Which is saying a lot.

Our heroine’s story begins in apartheid South Africa, where she was born the second daughter of two anti-apartheid intellectuals. The family eventually relocated to Australia, where her parents still live. Ceridwen, however, moved to London for a year after high school, before going on to Harvard for a joint degree in Visual and Environmental Studies and Anthropology. As her senior thesis, she produced "Aftertaste", a documentary on wine labor relations in South Africa that showed at film festivals around the world. This year, the award-winning documentarian has just released her first novel, Blood Kin, in 14 countries.

Did I mention she’s 27? Seems like this young novelist is developing quite the life tale.

Blood Kin, however, is consciously not autobiographical. The tale of a fictional military coup is set in a deliberately ambiguous country at an unspecified time. This country’s president has just been overthrown by a military commander, and three members of the presidential household—his chef, his portraitist, and his barber—are taken hostage and speak out in turn. Through the narration of these characters and the significant women in their lives, Dovey weaves an intimate picture of how, as one character puts it, “power and desire couple effortlessly.” The book jacket features a blurb by Nobel Prize winner and fellow South African writer J.M. Coetzee, calling Blood Kin "a fable of the arrogance of power, beneath whose dreamlike surface swirl currents of complex sensuality."

It may be dark, but it is delicious. And critics around the world have been eating it up, praising Blood Kin as a masterful debut novel. As the New York Times Book Review wrote, “Dovey's ultimate lesson…may be a bleak one, but she presents her case so meticulously and relentlessly that you've got to respect her authority.” In 2007, Blood Kin was short-listed for the United Kingdom’s prestigious John Llewellyn Rhys Award for the best book by a British/Commonwealth writer under 35. This year, it has been short-listed for another illustrious honor, the Commonwealth Writers’ Prize: Best First Book, Africa.

How does Dovey see her success at this new enterprise?

“It came a little bit out of the blue,” she laughs, referring to a background without any undergraduate fiction-writing courses. “My career as a novelist came out of a failure at filmmaking.”

Our readers may be skeptical to hear her utter the word “failure,” but she explains. After graduating from Harvard, she spent a year in New York working at the PBS current affairs program, "NOW with Bill Moyers". Dovey then moved to Cape Town with the intention of producing an ethnographic film about post-apartheid South Africa. But her plans fell through when she found herself on her own without camera or equipment. Caught in a self-proclaimed “crisis of confidence” and desperate for a creative outlet, she turned to writing, enrolling in a Masters of Creative Writing program at the University of Cape Town.

“I called them up and said, ‘Hi I wrote a book, do you want to read it?’ And they said yes.” The rest is book tours, interviews, multi-continent editions.

And graduate school. Forget basking in the glow of success—Dovey, now a PhD student in Social Anthropology at New York University, once again carries it with her onto new and different pursuits. From wine farms to fictional dictators, to…climate change adaptation? She explains that it’s not that far a stretch.

“My PhD supervisor suspects that I’m interested in moments of dislocation, in new orders emerging, and I think he’s right.” Even if the consistency between passions is questionable, her passion is, as always, undeniable. Climate change adaptation, she says, is “becoming a political rallying point. And it is changing the way we live in the most drastic way since the industrial revolution.”

Devoted readers still have hope that our budding anthropologist will produce another novel in the future. Constantly steeped in the literature of social anthropology these days, Dovey confesses to having cravings for her other love, “I just want to read fiction all the time!” Never one to be pegged into a niche, Dovey is currently exploring other genres of writing as well. She describes it as one of the unforeseen perks of being a celebrated new writer: “other types of writing opportunities fall into your lap.” In addition to book reviews and short fiction, she is working on an essay for Vogue about coming of age in South Africa at the time of the first democratic elections in 1994.

For any normal person, this would be a full plate. But learning as much as we have about our heroine so far, we cannot help but ask, anything else? –– all the while fearing that this Harvardwood interview must be taking up the last seconds of her free time. However, in true form, Ceridwen smiles (we can hear it over the phone) and admits that she is involved with a few other things. She is learning how to swing dance. And she is taking French lessons again, in preparation for a book tour in Paris. Just another art form and another language.

So where does documentarian-novelist-graduate student Ceridwen see herself in ten years?

“I’d like to always be working on creative projects even if I’m working as something else.” She pauses to add some practical matters…”And I’d be 38, so I guess I’d have a kid or two.”

By that point, she will probably have another career or two as well. Let’s hope that she keeps us updated. I, for one, would be delighted to read the autobiography of Ceridwen Dovey if she ever chooses to write it.