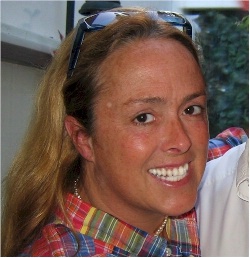 I wish I had been in Cambridge last weekend. Lisa Beach '80 spoke at the Science Center for a Harvardwood Arts First event, and those in attendance had a real treat. Yes, she's having an amazingly successful career in Hollywood, but it's her liveliness and warmth that could charm the socks off anyone. And her integrity inspires. In an industry known for its survival of the fittest mentality, spending time with Ms. Beach is a delight.

Her accolades speak for themselves. In her twenty years of experience as a casting director for feature films and television, she has cast over fifty films, TV movies, TV pilots and series. The Casting Society of America has honored her with three Artios Awards for her work on WEDDING CRASHERS, ABOUT SCHMIDT and ELECTION. Other credits include FRED CLAUS, 3:10 to YUMA, WALK THE LINE, REDEYE, WHITE CHICKS, GIRL INTERRUPTED, the SCREAM trilogy, and SCHOOL TIES.

If you recognize Lisa Beach from her photo, it's because you've seen her on the silver screen. In addition to other small film roles, she played the wedding planner in WEDDING CRASHERS. A casting director in a movie role? What gives? Lisa Beach is no ordinary individual.

Lisa says that "Harvard changed [her] life" due to the opportunities to which she's been exposed, but most importantly because of the people she's met. She marvels at all of the talented people from her class in arts & entertainment: Andy Borowitz, Carlton Cuse, Michael Roberts, Peter Sellars and Lucy Fisher, among others. She's very proud of her class of 1980. "We were a special group on campus and we continue to be a special group."

Her first job after graduating from Harvard was a stint in consulting. She worked as a research assistant at a management consulting firm. The experience made her realize that she did not want a future in the business world. She left Cambridge on June 4th, 1984.

Her first job in Hollywood was as an assistant for director Nick Meyer on the movie VOLUNTEERS. Following that she worked as an assistant for two years under casting director David Rubin. From there she set out on her own. Fast forward to 1990, when Lisa was the sole casting director on BAD INFLUENCE, starring Rob Lowe and James Spader, just a few years after graduating from college.

Lisa feels blessed by having had the opportunity to work with some of the best talent in Hollywood. One of the reasons she loves her job is that she's passionate about fighting for the actor, but she also has an understanding for business needs. She has a lot of respect for the corporate side of things, even though she knew that the corporate world wasn't for her. "Casting can be so creative," says Lisa, "and I love the independence and freedom of the work."

One thing some don't know about Lisa is that she was scheduled to be on Flight 11 from Boston to Los Angeles on 9/11. A last-minute change in plans prevented her from being on that tragic flight. The experience changed Lisa; she sees the world through new eyes. Her passion doesn't stop with filmmaking. Every year Lisa travels to the continent of Africa. Her past adventures include white-water rafting in Zambia, hot air ballooning in Kenya and scuba diving in Zanzibar. The lure of Africa has resulted in sixteen trips (and counting).

Lisa currently resides in Los Angeles with her pet cats. True to form, Lisa doesn't do this half-way either. Two of her seven cats, Lady Jane and Peach, have been awarded worldwide recognition.

What started Lisa on her amazing journey? It was something about the movie SLEEPER, directed by Woody Allen, that got her thinking about a career in casting. She was inspired by the work of legendary casting director Lynn Stalmaster. Little did she know then that her idea would lead to action, which would take her to the pinnacles of success in Hollywood.