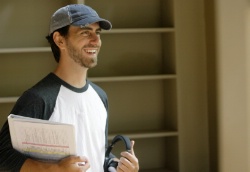 Adam B. Stein '99 has garnered a great deal of notice recently through the short films he made for "On The Lot", the Fox reality show for filmmakers executive produced by Steven Spielberg and Mark Burnett of "The Apprentice" and "Survivor." The process of being accepted to the show was arduous: submitting films, sitting through various rounds of interviews, and directing a new film in five days. To make the final rounds of the competition, according to the "On The Lot" website, Stein had to beat out some 12,000 other applicants. What buoyed the developing filmmaker even more was that in the finals, the judges consistently awarded him highest marks. Judges included accomplished industry professionals such as director Garry Marshall (PRETTY WOMAN), actress-screenwriter Carrie Fisher (POSTCARDS FROM THE EDGE, STAR WARS), director-producer Brett Ratner ("Prison Break," AFTER THE SUNSET) and director Gary Ross (PLEASANTVILLE).

Although Stein got third place rather than first (which would have won him a million dollar development deal with Dreamworks), he left the show with strong interest from managers and agents plus the knowledge that "really great directors had given [him] praise on national TV." Once he sorts out his representation situation, Stein plans to get behind the camera again as soon as possible.

Stein, a Miami native, is the first filmmaker in his family. In fact, his parents encouraged him to apply to Harvard Law School and were happy when he got in. Stein said, "I was an English major, a Literature concentrator, and English majors apply to law school when they don't know what they want to do." Only, as Stein admits, he did know that he wanted to go into film, he just didn't have the courage to do so at first. At orientation for Harvard Law School, he decided to move to LA and give filmmaking a try. He did odd jobs in LA for a couple of years, applied to USC's film school and was accepted, and subsequently also worked for the Academy of Motion Pictures. Then he edited some independent films, including BLUE STATE with Academy Award winning actress Anna Paquin, produced by her brother Andrew Paquin '00 and directed by Marshall Lewy '99/'00 which made it to the Tribeca Film Festival. With his professional experience and bevy of short films, it seems that Stein is well on the way to achieving his goal: a career as a filmmaker.

Stein's love for film was ignited at Harvard. He did a lot of theater in college, acting in different productions and taking film courses. One favorite was a Visual and Environmental Studies course about the classics of world cinema. He took that for credit sophomore year. That was the course that first made him think of directing, because it inspired him "to delve deeper into how a director's tools work to make a film more than just entertainment." As he explains, "two of [his] favorite movies -- BRAZIL and NASHVILLE -- are comedies that don't just entertain, they also comment on the way we live our lives in modern society." Stein believes that comedy has the ability to reach viewers in a deep way because they are disarmed while laughing. Ironically, Stein -- now a professional filmmaker -- didn't get into the introductory VES filmmaking course. But he did get into NYU's summer intensive intro to film course. So the summer before (CUT his) senior year, Stein found himself in New York making five short films on 16 millimeter film in 5 weeks. That, in addition to graduate work at USC, was good preparation for "On The Lot", where he had to come up with a new film every single week. His short films, most of which can be viewed on YouTube, include ARMY GUY, DANCE MAN and DRIVING UNDER THE INFLUENCE. The film that won him acceptance to "On The Lot", titled DOUGH: THE MUSICAL, cost about $1000 to make. It is set in a bakery with a young baker singing of his desire for a wife, while a young woman comes in singing about how she's looking for a job. The juxtaposition of their two dreams -- he thinks she's "the one", while she erupts into song about wanting health insurance -- is funny.

Masked by humor, Stein also has a serious intellectual side. His undergraduate thesis in Literature was on American depictions of Spain during the Franco period. For instance, Hemingway thought of Spain as a raw, emotional, earthy place; Stein argued that Franco tried to depict Spain to his own people in the same way, but he did so as a way to control them. One book Stein examined was the Spanish novel "La Tesis de Nancy," about an American girl named Nancy who goes to Spain to write her thesis. The novel's a comedy because she can't see anything for what it is. Her perception of Spanish people is that they are unintellectual and primitive, whereas she is really the one who is intellectually deficient. "But I haven't thought of my thesis in years," admits Stein. It is easy to understand why. He's been busy learning how to tell stories through film, which he calls "the most fun job you can do. That's why we're all doing this."