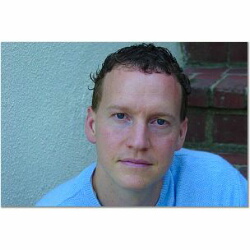 The last time I saw Nicky Weinstock, he’d left Manhattan for Garrison, NY with his wife (writer Amanda Beesley) and their Yorkshire terrier, Emerson. The couple quit their jobs to move to the country and write books. He’d been a book editor at Random House; she’d been an agent at ICM. “The Golden Hour,” based on Weinstock’s experience in the Garrison Fire Dept, comes out in paperback this month. It’s his third book. Catching up with Weinstock ten years later, I learned that he’d moved his family to LA in 2004, and in 2006 he was promoted to Vice President of Comedy Development for Twentieth Century Fox Television, developing some 60 or 70 new shows a year. He has three children, Lincoln (2), Derek (5), and Savannah (7). Unlike Nicky, who grew up on the east coast, his children ride bicycles in the sunny streets of Westwood.

Weinstock admits his “trajectory’s been bizarro.” First, his wife became pregnant. “We had the talk, as two writers, about how one of us needed to go out and get health insurance. I pulled the short straw, and it was me,” says Weinstock. That started Weinstock on the circuitous path leading him from the wilds of upstate NY into the wilds of Hollywood. Looking for a job, he called long-time friend Gary Ginsberg, head of communications for News Corporation. “Funny you should call,” Ginsberg told Weinstock, because News Corp had just created a position for a writer who would oversee communications. Weinstock interviewed to be the speechwriter for company Chairman Rupert Murdoch on a trial basis, and he got the job. He started writing all of the speeches for Murdoch and for Peter Chernin, President and Chief Operating Officer of News Corp and CEO of the Fox Group. Laughing, Weinstock confesses to turning the job into a big creative writing assignment: “Write in the voice of a 78-year-old visionary Australian businessman. Good. Now write in the voice of the 50-year-old firebrand president of News Corp. Great. Now try to explain a multinational media business to conservative investors. Excellent.”

Nicky spent a lot of time working in Murdoch’s office – four years, to be exact. During that time, he continued to write his own fiction and published a couple of novels with Harper Collins. He attributes his subsequent switch in positions at News Corp – and coasts of the United States – to Peter Chernin. “We came back from a speech that he’d given, and that I’d written, and he asked me into his office and said, ‘you shouldn’t be in the corporate headquarters, you should be on the creative side. You should go to Los Angeles and be a creative executive.’” Weinstock was given time to think about it. He talked to Amanda. He met with the head of Fox Searchlight and executives at other of the company’s film studios, and he ultimately decided to work at the television studio. “Coming from the book world, I loved the relatively breakneck pace of TV, and I loved the diversity of the slate of projects you work on. The fact that in the space of a year, you can take something from a pitched idea to the finished project – a casted, directed, produced and edited comedy pilot – is thrilling. For me, it was a radically new world.” He compared editing books to editing TV shows and said the one was good preparation for the other. “Basically I’m an editor for the shows I take on. That’s the part I feel I’ve done forever.”

At Harvard, Weinstock’s own background was as eclectic as the shows he produces. He majored in English and Social Anthropology and took a small creative writing course with Nobel Prize winner J.M. Coetze (DISGRACE) which, along with his anthropology courses, inspired him to go to Africa. He worked first as a volunteer on the construction of a health clinic in Ghana out of mud bricks. Then he traveled to Tanzania and Kenya for his anthropology fieldwork, living with the Nandi tribe for a month. On his third trip, he returned on a Rotary Scholarship and went to Botswana and South Africa, where once again he studied under the supervision of J.M. Coetze. It was an exciting time to be in South Africa. Nelson Mandela had just been released from prison. To Weinstock, “it was a great adventure,” comparable to working in Hollywood. “I probably use as much social science in my Hollywood life as I did in the African bush. Having four Hollywood agents angrily calling on a conference call, each pursuing their own agenda, is not that different from watching an incited baboon troop.”

To Weinstock, what links his trips and his radical move to California is the conviction that “life is most fun – and makes a better story – when lived in chapters…it’s the sense that you can keep yourself more awake, more alive and more excitingly aware of the whole world by turning the page, even if it’s a good page, and trying something new.” The fact that he’s been able to “hoodwink a wife and family into subscribing to this theory, and conjure a living in the process, is just plain luck.”

How does Weinstock manage to write while working full-time as an executive in television? He wakes at 4 AM to write his novels, before the kids get up. He has a backlog of ideas that he’s been playing with. The inspiration for his novels is his own life, turned sideways.

His advice for anyone wanting to get into TV is: “Find a way to get into the writers’ room.” In keeping with his own philosophy, Weinstock encourages those who are interested in the industry to realize, “you don’t have to have grown up in the ranks out here to get into the industry and succeed in it. You can bring other skills and other lives to the table.” Weinstock certainly has.