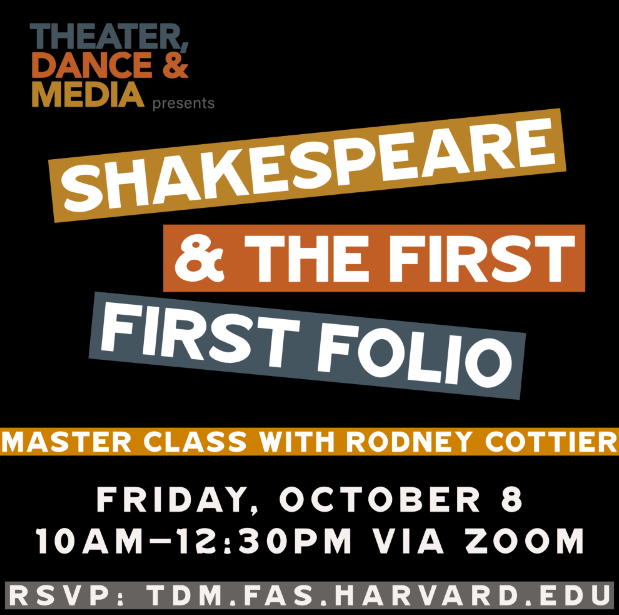 Rodney Cottier’s Shakespeare workshop takes students through a lively history of Shakespeare’s Globe Theatre; explores questions of Elizabethan staging in contemporary performance; delves into Shakespeare’s First Folio; and uses these discussions to approach Shakespeare’s text by working select scenes from the complete plays, with special attention to the opening of King Lear.

This masterclass is interactive, stimulating, and a great deal of fun! Geared to all levels.

Space is limited, and priority will be given to Harvard undergraduates.

Rodney is Head of the Drama School division at The London Academy of Music & Dramatic Art (LAMDA) – the UK’s oldest drama conservatory. With 35 years of experience as a stage director and teacher of stage combat, acting and text at LAMDA, Rodney brings a wealth of knowledge to students, he has directed 25 plays from Shakespeare’s canon. He has been a guest lecturer at the University of Connecticut and Citrus College Los Angeles, as well as conducting an annual workshop tour of top North American Universities (to date he has visited 27 states) focusing on Shakespeare’s First Folio.

Rodney worked at Shakespeare’s Globe as Master-of-Fight, on several productions, including Mark Rylance’s Hamlet, as well as at the Royal Opera House, English and Welsh National Opera, the National Theatre Studio and many regional theatres. Rodney is also an alumnus of LAMDA’s flagship Three Year Professional Acting Course.