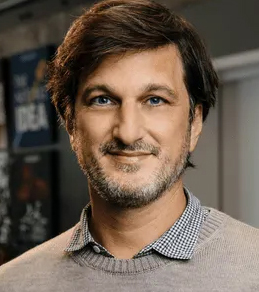 Marshall Lewy AB '99 is the current Chief Content Officer at Wondery, the largest independent podcast publisher and home to Dr. Death, Business Wars, The Shrink Next Door, American History Tellers, Dirty John and many more. Before his time at Wondery, Marshall wrote and directed the feature films Blue State and California Solo and was nominated for an Emmy for producing HBO’s TV series Project Greenlight featuring Matt Damon and Ben Affleck.


Q: Your show WeCrashed, similarly to that of Hulu’s The Dropout and Showtime’s Super Pumped: The Battle for Uber, focuses on a story of failed tech startup founders. Audiences seem ravenous for more of these true-life miniseries dramas. What do you think it is about these types of narratives that are so gripping to watchers? How much artistic liberty do you feel can be taken when adapting these stories to the screen?

A: We've told a lot of these sorts of true stories about bad actors in business across our various Wondery podcasts, from many seasons of Business Wars to our investigative miniseries like WeCrashed and The Vaping Fix, which was a series about the rise and fall of JUUL. They always have such fascinating characters, with stories of hubris and usually the perversion of the "American Dream." I think people respond because they tap into some deep vein that we all relate to, and they also are very of-the-moment for some of the challenges we're all going through collectively right now. I think we’re living through a period in time where lots of us are having trouble comprehending the larger realities happening all around us (e.g. pandemic, land war in Europe, domestic political upheaval, etc.), so we looking for an anchor of “truth” even in our fiction. And when it comes time to take these true podcasts and turn them into TV series, we recognize that the TV show is now a fictionalized drama, not an investigative series –  we want to support the vision of the writers, showrunners, actors, and directors who are working to bring the series to life. We share as much of our research and reporting as we can, but we also want them to make it their own, and hit the themes and truths they want to explore.

Q: Both WeCrashed and Joe vs. Carole are miniseries which originally played out as podcasts. How do you bring a podcast to life onscreen? How do you decide which podcasts could make compelling visual retellings in TV format?

A: We never make a podcast for the sole reason of turning it into a TV series – we are attracted to these stories because they’re fascinating stories and we think podcast listeners will respond. But I think we've found success in bringing them to TV because the narrative, character-driven way we create our podcasts attracts visual storytellers. And in many cases, we’ve had actors want to play certain roles just from listening to our podcast, which was the case with Kate McKinnon signing on to play Carole Baskin (which was six months before the Tiger King documentary ever aired on Netflix!), as well as Paul Rudd and Will Ferrell for our podcast The Shrink Next Door.

Q: You said in an article for The Hollywood Reporter that “listeners are growing more accustomed to podcasts that push the limits of how stories are told” in light of Wondery’s groundbreaking decision to release several podcast series in Dolby Atmos. This makes Wondery the first podcast streaming service in the US to deliver podcasts in the immersive sound format. What do you find unique about the further possibilities of the podcast format?

A: I started as an avid listener of podcasts before I got into making them. I loved the purity of the writing and the production – compared with television and film, there are a lot fewer moving parts, production-wise. I also loved the intimacy and authenticity of them. Even though podcasts have been around in some form for almost twenty years now (and radio long before that), it’s still so early in the evolution of on-demand spoken-word audio and audio storytelling. Spatial audio, smart speakers, interactivity ... there’s still a lot more to explore.

Q: Early on in your career, you accrued credits both as a writer and director, but for years your primary focus has been producing, especially podcasts. What led you to where you are now? What influenced you to pivot into producing, or was that always the goal?

A: My dream from the time I was a kid was always to be a film director. I went to film school at Columbia after Harvard and got an MFA in Film Directing. When I started film school, there wasn’t Youtube, podcasts, video streaming, etc. So my dream was to make thoughtful films that played in movie theaters on the big screen! But in the years after film school, I kept finding myself attracted to all the other ways that were proliferating around visual storytelling. So about a year after I wrote and directed a film that premiered at Sundance called California Solo, I started working more on the producing side, working with creators across all different types of media: film and TV, but also digital short-form, audio, book publishing, etc. I found it moved so much faster and allowed me to exercise so many different muscles than working on just one or two projects at a time. After that, it would be hard to go back to making just one movie at a time. At Wondery, I directed our first scripted audio drama Blood Ties, which just launched its third season, and that's been a great way to get back to directing scripted content.

Q: In what ways did your time at Harvard influence the path you have taken since graduating?

A: Well, I spent many, many nights during college watching old and obscure movies at the Harvard Film Archive and the Brattle Theater, and I took a bunch of film courses. I also created a “sitcom” at HRTV, the Harvard television station that had its headquarters in the basement of Pforzheimer House in the Quad. They had all kinds of video cameras and rudimentary digital editing systems back when you could only hold about 30 minutes of video footage on a single hard drive. We never got any audience because none of the houses at Harvard actually were wired for cable, but it was still a good way to practice making things.

Q: In a 2020 interview, you mentioned that you hadn’t noticed an increase in podcast listeners due to the pandemic at that time. Now, over two years later, do you find that statement remains accurate, or has there been a tangible COVID impact on the podcast industry in the wake of months-long quarantines? How about in terms of the creation, rather than the consumption, of podcasts?

A: It's hard to delineate what growth over the past few years came from the podcast boom that had already begun pre-pandemic, with what got accelerated by the pandemic. We did see a pretty steep dropoff in podcast listening during the first few months of the pandemic, but listening bounced back quickly as people found new times of day and activities to do while listening to podcasts. For example, maybe they started listening to podcasts while walking the dog instead of driving to work. So the pandemic has been a time of listener growth, and I think of podcast creation, too. One of the best examples of a very successful podcast that was born out of the pandemic is Smartless, which we now distribute and have a major partnership with at Wondery and Amazon Music. We launched a show in March 2020 called Even the Rich which seemed very ill-timed when it first launched and got off to an extremely slow start, but it has since become one of our most successful ongoing shows.

Q: What do you think is most essential to crafting a successful podcast?

A: A passionate connection to the subject matter, access to something or someone (or a point of view) that no one else in the world has, and a good microphone.

Q: Do you have a favorite podcast (or podcasts) you’d always recommend? What about TV shows, movies, or other go-to favorite pieces of media?

A: I’ll stick with podcasts only so the answer doesn’t go too long, but you can’t go wrong starting with some of the greatest episodes and stories from This American Life.

A: I used to love running and cooking, but now I have 4 kids ages 10 and under, so it’s mostly work and family these days.